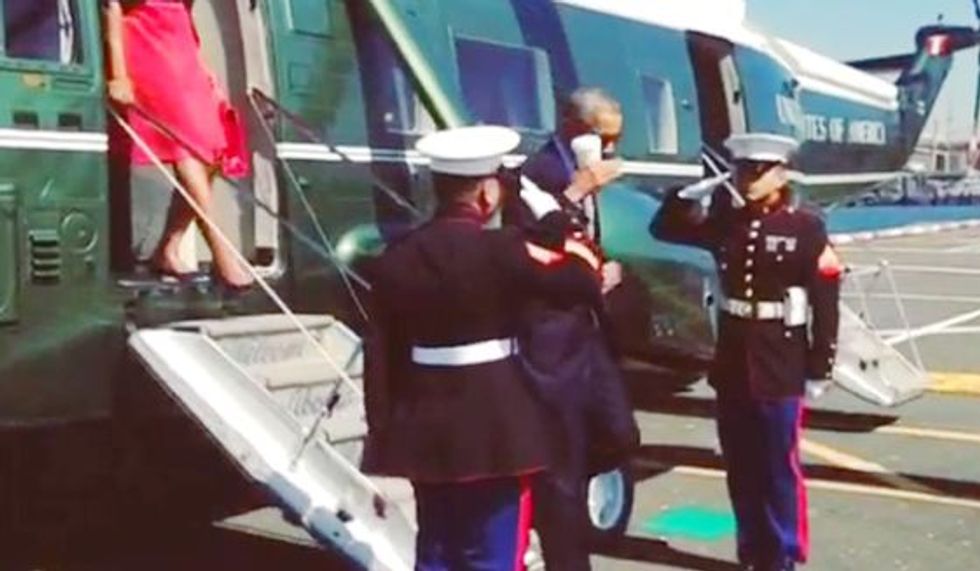 America is finally dead. Completely dead. Oh sure, you thought maybe it was dead before when the Kenyan socialist Muslim Naziindoctrinated innocent schoolchildren by urging them to study hard, or when the feckless tyrant wimp dictator made Marines hold umbrellas, but this time our once-great nation is dead, dead, dead. Barack Obama held a Styrofoam cup full of tea while he came down the steps of Marine One Tuesday and (it pains us so much to write this that we can barely make out the keyboard through our tears) kept the cup in his hand while saluting his Marine guards. The final moment of America, a once-great nation, was even sent out on Instagram by the White House, just to gloat over the unspeakable crime:

Thank god some patriots were paying attention and called the half-breed Muslin's treason exactly what it is: A betrayal of everything that made this nation great. Consider the Stupidest Man on the Internet, Jim Hoft, who headlined his impassioned defense of The Troops "A NEW LOW - Obama’s Salute to Marines - Most Degrading Salute Ever to Men in Uniform." The lead commenter at PatriotUpdate.com offered this nugget of wisdom:

Obumma just doesn't deserve the title of POTUS, or CINC, or US Citizen. The lack of respect for the position, for The People, for our nation's laws and founding principles is beyond comprehension. When his final term is over in 2016, may he fade into oblivion and let the rebuilding begin. Lee Harvey, where are you?

Some leftists in the media attempted to cover up for the monster, noting that presidents didn't salute their Marine guards at all until Ronald Reagan (Peace Be Upon Him) began doing it in the 1980s. What such pansies miss is that since Ronald Reagan did do it, it is obviously something that must be done, like never raising taxes or going on vacations.

And at FreeRepublic, one policy analyst offered this astute reading of the insulting excuse for a salute:

This is not an oversight. I believe it was an intentional action. Someone that loathes the military is painfully aware of the protocol of saluting the military and probably dreads it each and every time.

IMO this is a two-fer for Obama

1. This sends a message to his leftist base that while he is indeed dropping bombs today he still doesn’t give a shite for the military.

2. Thumb in the eye of conservative military types who REALLY notice these things

Meanwhile, the gracious souls at Little Green Footballs reminded us of what a president who really respects the troops looks like when he salutes: