Trey Gowdy Is A Dick Again, And Other Late Breaking Trump-Russia News! 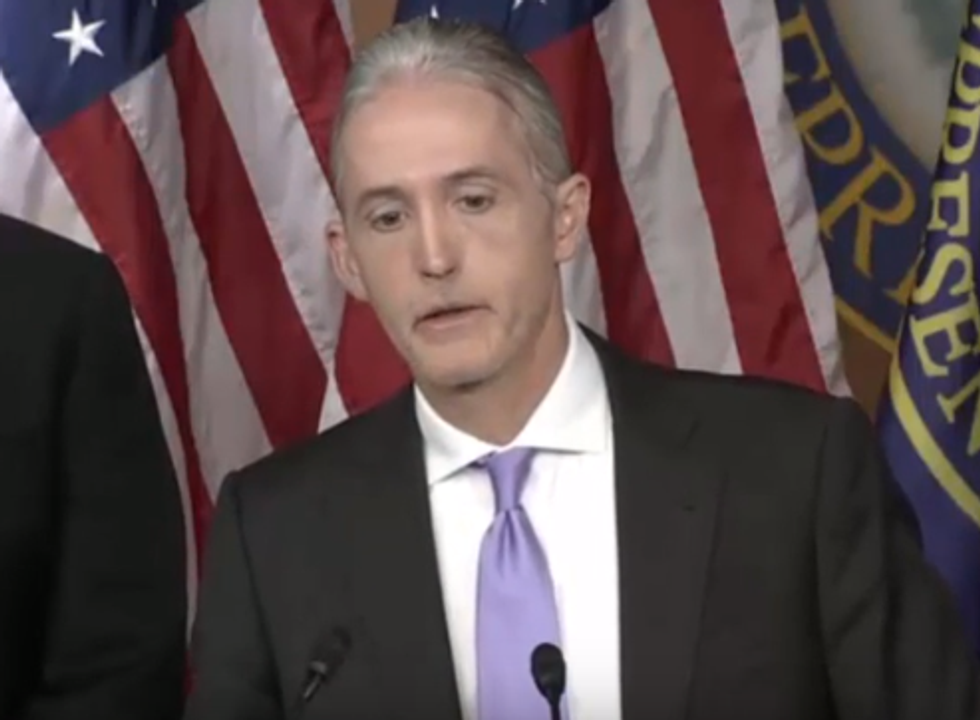 Did you hear that nutso thing about how the US State Department revoked the visa of a guy named Bill Browder, who is Vladimir Putin's arch-nemesis, on the same day the Kremlin managed to get Browder on Interpol's list of everybody that should be arrested if they try to cross a border? It's almost like they're trying to get Browder killed! (By Putin!)

But that's not the only gross news related to Donald Trump and Russia and the sexual collusion they very likely share. Let us update you on all the latest Trump-Russia news, right here in this post!

Donald Trump Will 'Pay' $430,000 In Russia Legal Bills For His Underlings, HAHAHAHAHAHAHA SURE

Know that thing about how Donald Trump says he will pay for a thing (contractors, donation to Gold Star family, etc.) and then he doesn't do it? Is it because he's poor, or because he just likes to write checks his ass doesn't ever feel like cashing? Probably both.

Anyway, that is literally the only detail you need to know about this scoop from Axios. Trump says he'll pay $430,000 in lawyer fees for people from his White House staff or campaign who aren't Donald Trump or Donald Trump Jr., and those checks are definitely in the mail, because Trump is a bill-payer from way back.

Trey Gowdy Is A Dick Again

Look at these dumb quotes from Rep. Trey Gowdy, who is still investigating Benghazi in his heart and in his pants, but is also on the House Intelligence Committee that's supposedly "investigating" ties between Trump and Russia:

YES, TREY GOWDY. WE ARE AWARE.

“The notion that one side is playing the part of defense attorney and that the other side is just these white hat defenders of the truth is laughable.”

It's more like the GOP -- and 'specially Gowdy's pal Devin Nunes, the shitweasel who's supposed to be "recused" from the Russia investigation, due to how he lives in a warm spot underneath Donald Trump's left nut -- is actually literally helping Trump obstruct justice in this investigation. They're not mere "defense attorneys," y'all. Give them a little more credit.

Gowdy says he is glad Robert Mueller is doing an apolitical investigation, we guess because that means Gowdy can continue being a Republican loser dick unwilling to exercise oversight over members of his own party, even if it endangers the republic.

Commenting on how the House Intel Committee will probably release two separate reports (one real one, from the Democrats, and one that's just a list of drawings Devin Nunes has done of Donald Trump's naked body, from the Republicans), Gowdy had this to say:

“This is politics,” he added.

We're going to take that to mean even the Republicans will agree about how guilty Trump and associates are, but they won't say, because they are craven shitheels. We know that's not what he means at all, but fuck Trey Gowdy with a gigantic pubic wig made out of Trey Gowdy's bad hair. That's what Wonkette always says.

Did you hear special counsel Bob Mueller is looking into the PODESTA GROUP? Holy shit, y'all! Is Mueller finally realizing this whole Trump-Russia conspiracy thing was invented by Hillary Clinton so she could use Russia to steal the election FROM HERSELF? (It wasn't.) Is he going through Clinton campaign chair John Podesta's dirty WikiLeaked emails and discovering a trail of SPIRIT COOKING that leads all the way to Hillary Clinton's door in Chappaqua? Did he wake up and smell the #PizzaGate?

But Mueller islooking at the Podesta Group, a DC lobbying firm run by John Podesta's brother Tony. Mueller was led to look at the firm because of the investigation into Trump campaign manager Paul Manafort's dirty Russian/Ukrainian money dealings, which included a PR campaign Manafort did for the European Centre for a Modern Ukraine (ECMU), which was funded by the Party Of Regions, a pro-Russian Ukrainian political party run by Putin's goons. The Podesta Group, which is cooperating fully with Mueller, also did some work on that PR campaign. Reportedly, Mueller is looking into whether the firm violated the Foreign Agents Registration Act (FARA) in its work, which is fine with us. If they fucked up their paperwork or conveniently forgot to register as foreign agents, they should be called on it like a common Paul Manafort.