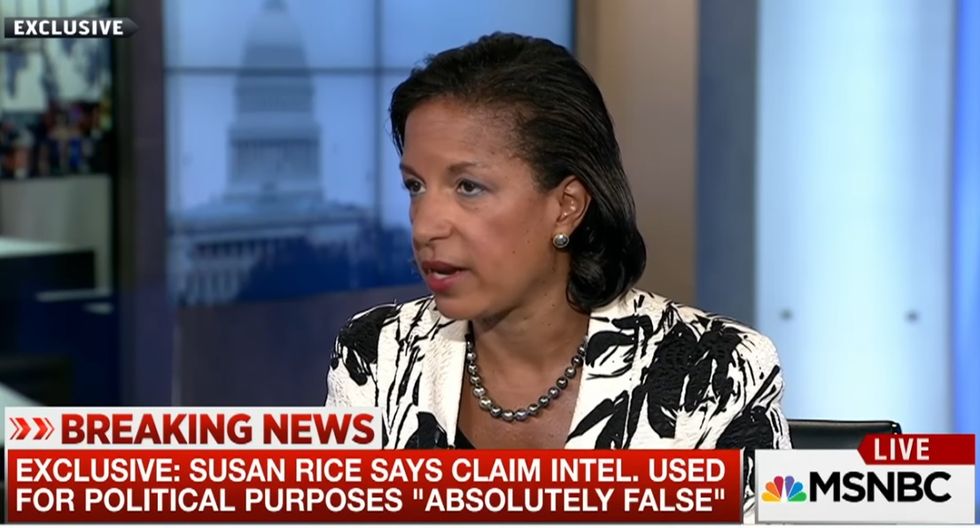 BREAKING NEWS ABOUT OBAMA PEOPLE BEING BAD! Earlier this year, we were inundated with trifling bullshit about how the real Russia scandal was that "Obama people" did "wire tapps" to Donald Trump, and that Obama National Security Adviser Susan Rice had improperly "unmasked" Trump people, which would just be UNFAIR. Where did she get off catching Trump people in the act of colluding with Russia, if that was what she was, in fact, doing?

Eli Lake at Bloomberg wrote a breathless SCOOP! piece about how Ezra Cohen-Watnick, who was one of Michael Flynn's boys at the National Security Council until he was fired in August, found Rice "unmasking" Trump people numerous times during the campaign and the transition, except for oops, Lake was forced to admit in the 9th paragraph of his story that his story was not a story, and Cohen-Watnick had caught Rice red-handed in the act of doing totally normal things that national security advisers do.

Rice testified behind closed doors for the House Intelligence Committee recently, and CNN has a leaky scoop regarding the unmasking crimes she admitted to. Turns out she was just curious why, during the Trump transition, Trump people were sneaking the crown prince of the United Arab Emirates into New York without telling the Obama administration:

This was in December, a month before Betsy DeVos's brother, Blackwater monster Erik Prince, went to a secret meeting in the Seychelles facilitated by the UAE, about setting up secret back channels with Russia for the Trump team. Ayup.

The Obama administration felt misled by the United Arab Emirates, which had failed to mention that Zayed was coming to the United States even though it's customary for foreign dignitaries to notify the US government about their travels, according to several sources familiar with the matter.

When we originally learned that Rice had unmasked Trump people, Devin Nunes and Rand Paul and the brain trust at Fox News were all like "CRIME! CRIME! SUSAN RICE IS A BLACK LADY! CRIME!" But after Rice's testimony (which we assume was about all the unmasking and not just this one thing with the sheikh, but you know, #classified), Republicans on the committee are singing a different tune:

"I didn't hear anything to believe that she did anything illegal," Florida Rep. Tom Rooney, a Republican helping to lead the panel's Russia invesigation, told CNN of Rice's testimony. He declined to discuss any of the contents of her classified remarks.

Oh. What about Mike Conaway, who took over the investigation after Nunes "recused" himself?

"She was a good witness, answered all our questions," Rep. Mike Conaway, the Texas Republican now running the House Russia probe, told CNN. "I'm not aware of any reason to bring her back."

But Trey Gowdy? Surely he still has a hard-on for locking Rice the fuck up?

Rep. Trey Gowdy, a South Carolina Republican who is helping lead the House investigation, told the Daily Caller "nothing that came up in her interview that led me to conclude" that she improperly unmasked the names of Trump associates or leaked it to the press.

HUH. She must be a more devious crimer than we ever knew, if she rolled these Republicans boys like this!

And what about flagrant shit-noggin Devin Nunes?

Gonna guess that's CNN's nice and polite way of saying that in response to questions, Nunes shed a few anger tears, then went back to picking corn out of his b-hole while he awaits further instructions from Donald Trump, his real dad.