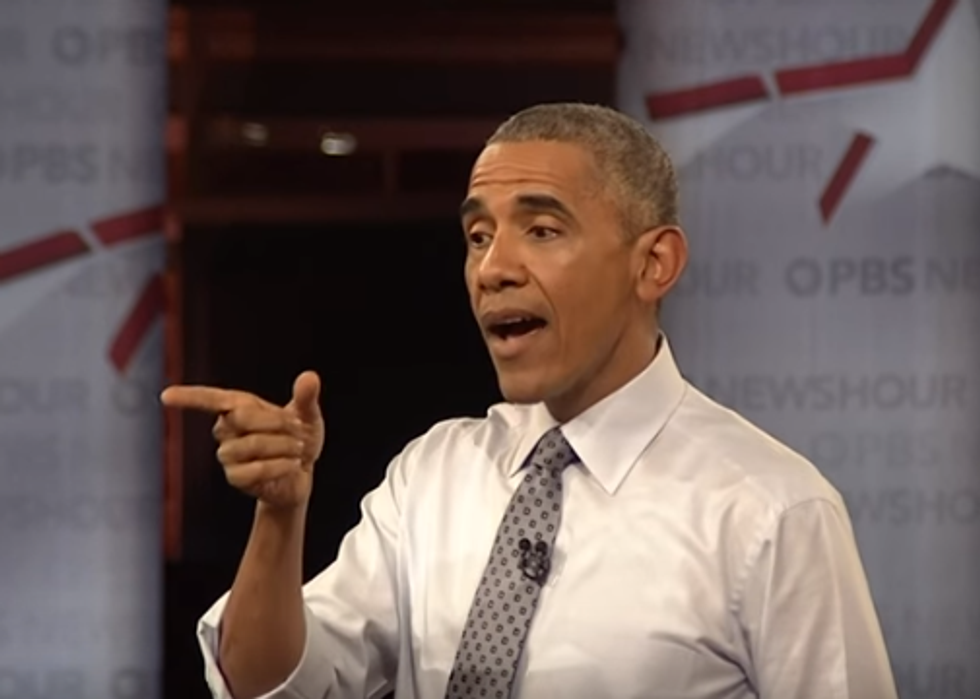 Oh that Barry Bamz Gun-Stealer Muslim Marxist Gay Fairy Princess Obama! Will he stop at nothing to pry every gun out of every cold, clammy, dead head in America? And then he pretends he doesn't even take everybody's guns away, what nerve!

After a PBS town hall meeting in Elkhart, Indiana, President Obama took a question from an elderly white gentleman named Doug Rhude, who was very upset about how the president took his guns and won't give them back. And Doug owns a gun store too! He wanted to know why Hillary and Barack want all his guns, when they refuse to round up the "thugs" in Chicago and make them pay for their crimes. Doug noted that we hold "irresponsible people accountable for their actions when they drink and drive and kill somebody, and we do that without restricting control of cars ... to the rest of us, the good guys," so why don't we just do that with guns?

Obama's response? Pretty awesome. Did he take Mister Gun Man's guns away? Actually, no. Did he blow holes through the dude's logic about "restricting control of cars"? Yes ma'am, he did!

It's a thing to behold when President O uses his words, as he so often does:

First of all, the notion that I or Hillary or Democrats or whoever you want to choose are hell-bent on taking away folks’ guns is just not true.

And I don’t care how many times the NRA says it. I’m about to leave office. There have been more guns sold since I have been president than just about any time in U.S. history. There are enough guns for every man, woman and child in this country.

(Because all the wingnuts are so afraid of the black president.)

And at no point have I ever, ever proposed confiscating guns from responsible gun owners. So it’s just not true.

What I have said is precisely what you suggested ...

What YOU suggested, Captain Smart Guy!

... which is, why don’t we treat this like every other thing that we use? We used to have really bad auto fatality rates. The auto fatality rate has actually dropped precipitously, drastically, since I was a kid. Why is that? We decided, we had seatbelt laws. We decided to have manufacturers put airbags in place. We decided to crack down on drunk driving and texting. We decided to redesign roads so that they were less likely to have a car "bank." We studied what is causing these fatalities, using science, data and evidence, and then we slowly treated it like the public health problem it was, and it got reduced.

We are not allowed to do any of that when it comes to guns, because ... if you propose anything, it is suggested that we're trying to wipe away gun rights and impose tyranny and martial law.

[wonkbar]<a href="http://wonkette.com/582598/nra-convention-is-jizz-soaked-festival-of-guns-fear-hillary-hate-more-jizz"></a>[/wonkbar]OK so we know at this point in Obama's answer, wussy NRA types like Ted Nugent and Wayne LaPierre have already tuned out and sticked all their guns into their heinie-holes so Obama can't get to them. They know he's going to try to get them. Any day now, really. How many days are even left in Obama's presidency? ENOUGH DAYS TO TAKE ALL YOUR GUNS IS HOW MANY.

Anyway, Obama then explained to the man he can't even ban a "known ISIL sympathizer" from buying guns, because the poor NRA knows denying that right to terrorists is a slippery slope to lawlessness and tyranny. Does the NRA want to have to rewrite Dietrich Bonhoeffer's famous quote, to say "First Obama took the terr'ists' guns, but I ain't said nothin' 'cause I ain't no fuckin' Mooslin"?

You should watch the whole video (FOR REAL THIS TIME, because it's so great), but here is how the preznit finished:

Sir, I just have to say, respectfully, that there is a way for us to have commonsense gun laws. There is a way for us to make sure that lawful, responsible gun owners like yourself are able to use them for sporting, hunting, protecting yourself, but the only way we’re going to do that is if we don’t have a situation in which anything that is proposed is viewed as some tyrannical destruction of the Second Amendment. And that’s how the issue too often gets framed.

"Also, you are A Idiot," the president forgot to add.

[wonkbar]<a href="http://wonkette.com/597555/how-is-barack-obama-taking-all-your-guns-away-today"></a>[/wonkbar]This is the same stuff Obama has been saying OVER and OVER and OVER again -- at town hall meetings, in his State Of The Union Address, when he's talking about kids murdered with guns in mass shootings, when he's addressing the nation immediately after other mass shootings -- and yet, he has failed to confiscate one measly gun.

It's like he doesn't even WANT to or something. But don't tell that to the frothing squeal-holes of the NRA. They're locked and loaded, ready for a motherfucker to JUST TRY IT, JUST TRY TO TAKE MY PENIS-GUNS, YOU CAIN'T HAVE 'EM, GODDAMMIT!