Trump Admin Steps Back From Complete Dick Move On DACA Renewals, Is Now Only Half A Dick 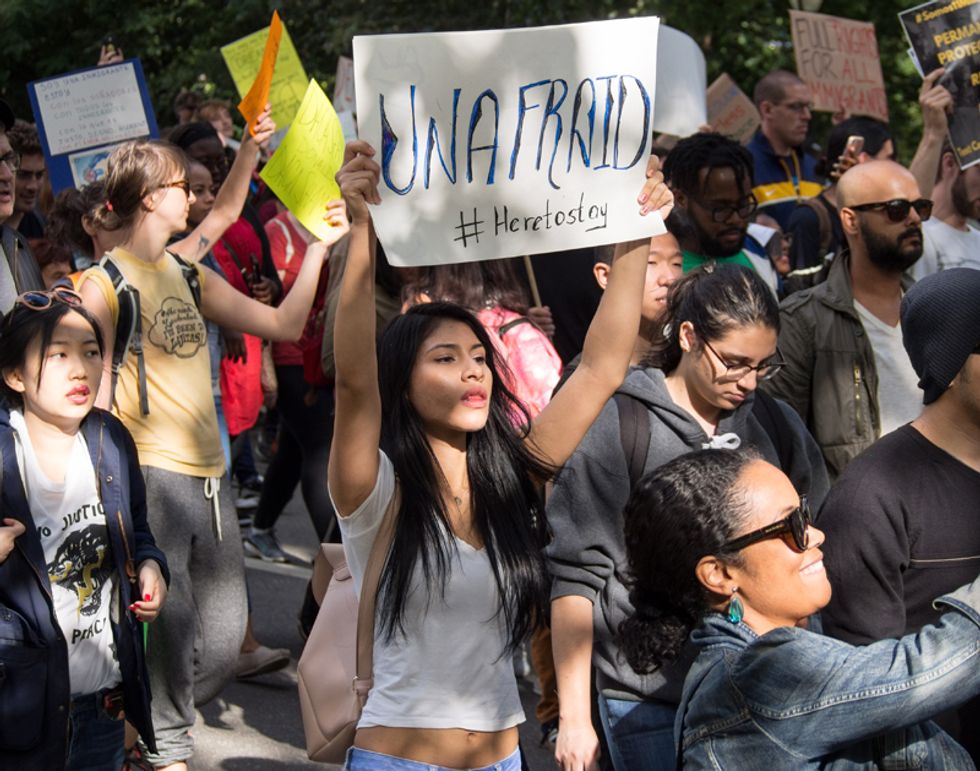 They look pretty suspicious to us.

This is almost a Nice Time story, although the underlying situation is still horrible. After Trump sent out Jeff Sessions to announce the end of DACA, the Deferred Action for Child Arrivals program, Trump later offered a partial reprieve for some current DACA recipients: If their current eligibility expired before March 5, the arbitrary date set for the end of DACA, they could apply for renewal, but that application would have to be received by October 5. Not postmarked, like with taxes, which a sender has some control over, but received in one of several mail drop boxes for the applications. For some reason, the US post office "delayed" many from arriving on time, even if they were sent certified the first week of September! Then the news broke last week that many DACA folks had their applications rejected because while they may have arrived at the postal drop boxes by late afternoon or evening of October 5, employees from United States Citizenship and Immigration Services (USCIS) didn't check the boxes until the next day, making the applications "late." Vox reported this week that the decision may have affected hundreds of applicants. Too bad, so sad, shoulda known that "October 5" didn't mean the whole damn day.

Now, a small bit of good news for the people screwed over by that action: Homeland Security announced Wednesday night that it would allow (some of) those affected by the department's action to reapply.

The Trump administration isn’t guaranteeing that these applications will be approved. But it’s at least agreeing to consider applications it had previously rejected out of hand.

That could mean another two years of protection from deportation for hundreds, maybe even thousands, of immigrants. And it marks the first major reversal on immigration policy from an administration that has generally taken pride in its hardline stance.

Mind you, there are still more goddamned hoops to jump through. USCIS isn't simply going to automatically consider any applications marked as "late" because of their stupidity. So people who got a notification that their application wasn't received on time will have to resubmit the things -- we're sure it's very simple paperwork -- and then the agency will give them another look. Fortunately, since USCIS didn't cash the checks included with "late" applications, those who reapply won't be double-billed for the second try.

To complicate matters further, there are actually two categories of people who'll get the chance to reapply. The government will contact those whose applications arrived on October 5 but weren't picked up until the next day, although DHS has issued no information on how the notifications will be handled or how long the applicants will have to reapply.

The second group will have to contact the government themselves: If someone's application arrived on October 6 or later, but had been mailed in plenty of time to meet the deadline, those folks can reapply and hope for the best. You see, the initial New York Times report on Dreamers deferred pointed out that a lot of applications had been mysteriously delayed in the mail -- in one insane example, an application sent September 14 arrived in Chicago on September 16, then bounced around in the mail system for two weeks, disappearing from tracking for a while, before arriving -- conveniently too late to qualify for consideration -- in USCIS's Chicago office. How convenient! The Times found at least 33 similar cases being appealed by immigration lawyers.

For applicants in that second category, Vox says, the procedure appears clear as mud:

Immigrants whose applications arrived late due to the mail slowdown will not be contacted by the government to reapply. They’ll have to show the government “individualized proof that the request was originally mailed in a timely manner,” and that the reason it arrived late was because of the Postal Service. (It’s not yet clear exactly what proof the government will accept; immigrants who sent their applications by certified mail, and therefore were able to track their packages through the system, will have more evidence available than others.)

You might think USCIS would have thought this through and noticed that the IRS verifies things just fine with a postmark. But it's fairly likely the ambiguity and consequent fuckery was deliberate, an excuse to deny and deport more troublesome brown people.

As Vox points out, the Trump administration holds all the cards here, and didn't have to offer anyone a second chance; we're guessing someone at DHS looked at the probability of a lot of lawsuits from rejected applicants -- and the accompanying marches and editorials and Trump officials making glassy-eyed excuses on cable TV -- and decided the hell with it, it wasn't worth the bad publicity for an administration that is already despised. Vox suggests the decision to reconsider some applications is a strategic move to forestall lawsuits arguing the end of DACA is being administered capriciously.

Hell, it's the Trump administration. Hundreds of thousands of DACA recipients still face eventual deportation if Congress doesn't fix this mess, and lately, Congress is barely capable of doing anything at all. But for hundreds, maybe thousands, of people arbitrarily rejected, this is at least a small reprieve. Hooray. If they manage to hold on long enough, they deserve a Democratic Congress that will take immigration reform seriously.

Yr Wonkette is supported by reader donations. Click here to help us out -- and there's no deadline.