Trump Almost Made Deal On DACA, But Then John Kelly Saved Racists' Day! 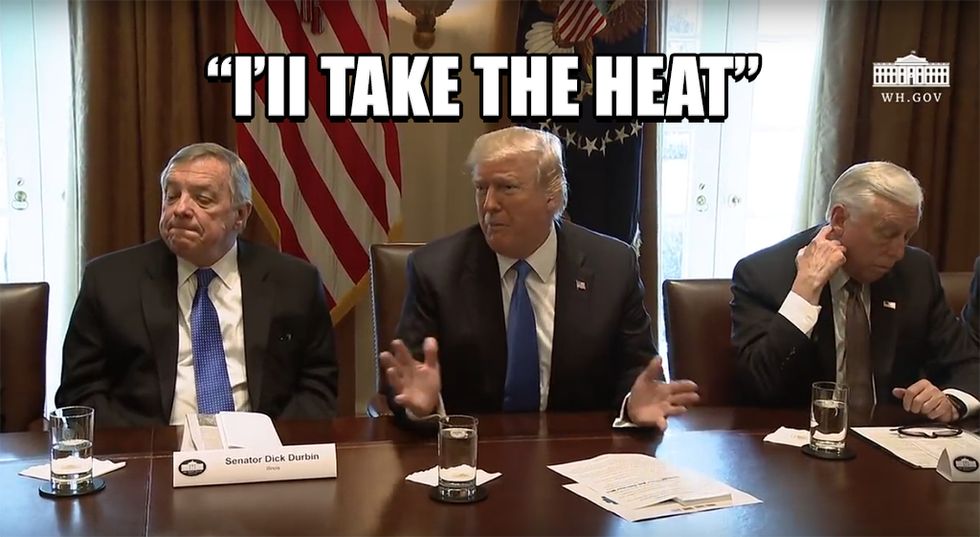 Makes as much sense as claiming Trump said 'shithouse'

You might have been wondering how Donald Trump went from "I think my positions are going to be what the people in this room come up with" on immigration last Tuesday to demanding that the US demand more Norwegian immigrants on Thursday and proclaiming this weekend that Democrats just don't seem to want a DACA deal. (Probably because he didn't know DACA and the Dreamers mean the same thing.) Last night, the Washington Post ran an insider-sourced account of Thursday's "shithole countries" meeting that gives us some answers. Mostly, it comes down to a couple of far-right dickheads deploying the familiar Trump-wrangling strategy of making sure they were the last people he heard from before Dick Durban and Lindsey Graham dropped by the White House to present exactly what he'd asked for two days earlier: a bipartisan deal on DACA and other immigration issues.

WaPo reports that at 10:15 Thursday morning, Trump was happy to hear from Durbin that there was a deal ready to look at, and asked if Graham was "on board," because now they're friends, or were at the moment. Trump invited the two to come to the White House at noon, but when they arrived, the "president's" mood had soured:

Trump was far from ready to finalize the agreement. He was "fired up" and surrounded by hard-line conservatives such as Sen. Tom Cotton (R-Ark.), who seemed confident that the president was now aligned with them, according to one person with knowledge of the meeting.

Trump told the group he wasn't interested in the terms of the bipartisan deal that Durbin and Graham had been putting together. And as he shrugged off suggestions from Durbin and others, the president called nations from Africa "shithole countries," denigrated Haiti and grew angry. The meeting was short, tense and often dominated by loud cross-talk and swearing, according to Republicans and Democrats familiar with the meeting.

Why is anyone thrilled that this deportation-happy jerk is getting promoted?

And how did Trump suddenly turn all immigration hawk again? Turns out he had a little help from icky dead-eyed racist Stephen Miller and from his chief of staff, John Kelly, who, despite his sometimes reputation as one of the grown-ups, has always been a dick on immigration, as we saw when he transformed Homeland Security into Deportations R Us.

Hope you have your deportation pants on, 'cause you're about to get deported.

After Tuesday's meeting where Trump said he'd sign anything lawmakers brought him, and even offered to "run interference" with his base if Graham and other senators were willing to do some kind of comprehensive immigration reform, a bipartisan group of senators actually came up with a proposal that would have allowed DACA recipients to stay in the US and get on a path to citizenship, as well as extending protected status for people from Haiti and El Salvador. For Republicans, the deal included a reduction in visas available through a "lottery," and increased funding for border security, including a little money for the sacred Wall.

Unfortunately, Stephen Miller and other members of the deport-everybody faction in the White House got wind of the planned meeting. Worried that "Graham and Durbin would try to trick Trump into signing a bill that was damaging to him and would hurt him with his political base," they arranged to bring in legislators who would remind Trump how much he hates rapey murdery Messicans and AIDS-ridden Haitians. Marc Short, the White House legislative affairs director, got on the phone to invite some rightwingers to build a wall around Trump, like Rep. Bob Goodlatte, and Trump himself wanted the help of his Starburst pal, Kevin McCarthy. WaPo adds that David Perdue and Tom Cotton "were also invited to rush over," but that passive construction doesn't indicate who asked them to show up.

Once the anti-immigrant creeps were added to help Trump remember he didn't like the deal, whatever it would be, Kelly, who had been briefed on the Graham-Durbin proposal, got to work on him, "to tell him that the proposal would probably not be good for his agenda" and immunize him against the dangers of those wily Democrats with their stupid sympathies for people who don't belong in US America and such as. By the time Durbin and Graham showed up for the meeting, apparently all the White House staff had to do was point him in the right direction, but to be on the safe side, Kelly attended as well to keep a gimlet eye on him.

Once in the meeting, Trump said he would not eat this Durbin-Graham, he did not like it, Sam I Am. It didn't fund the border wall, it wouldn't bring in whites at all:

He also objected that Democratic proposals to adjust the visa lottery and federal policy for immigrants with temporary protected status were going to drive more people from countries he deemed undesirable into the United States instead of attracting immigrants from places like Norway and Asia, people familiar with the meeting said.

He also got pissy when Durbin said extending Temporary Protected Status for Haitians would help sell the proposal to the Congressional Black Caucus. Well! The "president" made it very clear that he was not about to have a bunch of black people telling Donald Trump what to do, no way:

Trump was curt and dismissive, saying he was not making immigration policy to cater to the CBC and did not particularly care about that bloc's demands, according to people briefed on the meeting. "You've got to be joking," one adviser said, describing Trump's reaction.

He is, after all, the least racist person.

When Trump asked the probing question, "Why are we having all these people from shithole countries come here?" those in the room said John Kelly didn't visibly react. But at least Tom Cotton and David Perdue have finally agreed which tire went flat and made them late for the final exam:

Three White House officials said Perdue and Cotton told the White House that they heard "shithouse" rather than "shithole," allowing them to deny the president's comments on television over the weekend. The two men initially said publicly that they could not recall what the president said.

Apart from it not making a goddamned bit of sense, we're not sure how that's supposed to be an improvement. And who on earth would ever say "shithouse countries"? It's not a phrase even Donald Trump would say, except maybe when misreading a teleprompter.

For his part, Lindsey Graham reportedly isn't interested in the politics of shit, and has "told others in his circle" that going into it would just hurt the chances of an immigration deal. Yeah, he's in one of those phases where he seems briefly sane and reasonable, largely because the topic doesn't involve bombing anyone or taking away Americans' health insurance.

So, good job, Miller and Kelly! You got Donald Trump all worked up into a campaign rally lather, and for now at least, that means DACA kids are screwed. Isn't America a beautiful place?

Yr Wonkette is supported by reader donations. Please click here to send us your Ameros!