Trump And Chuck Grassley Definitely Phone-Sexing About Corn And Not Trump Jr.'s Coming Senate Grilling. FOR SURE. 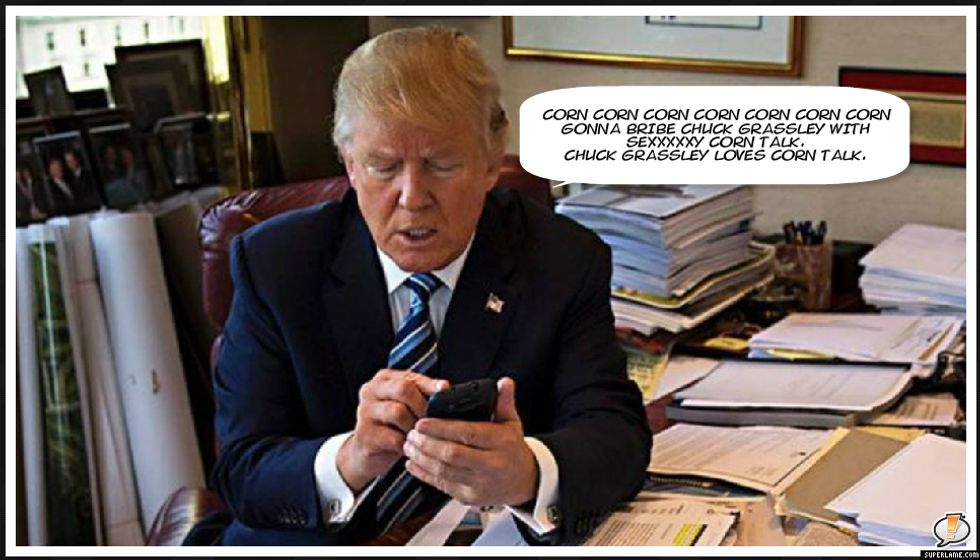 If you watched "The West Wing," you remember the minor controversy over the presidential candidates taking the "ethanol pledge." It's an Iowa thing, and candidates have to say, "Yeah whatever, your corn subsidies, blah blah blah." As Lawrence O'Donnell (who was involved in that show!) noted on his show Wednesday night, once the campaign is over, everybody proceeds to STFU about ethanol until the next campaign, and so on and so forth.

So it's funny that Donald Trump reportedly picked up the Obamaphone on his Oval Office desk on Wednesday and called dimwitted Iowa Senator Chuck Grassley, the chair of the Senate Judiciary Committee, totally out of the blue, just to sweet talk him about corn.

This conversation only happened because Donald Trump was having a routine #CornThoughts episode, and no way, no how does it have anything to do with how the Senate Judiciary Committee is about to interview Donald Trump Jr., the president's hilarious first failed attempt at procreating, about his role in the Trump-Russia conspiracy. Is corn not a good enough reason to pick up the phone? If you live in Iowa, it is!

Why does everybody think this is weird? And it's not just the fake news either. Even conservative mouthpieces like the Daily Caller noticed the connection, IN THEIR HEADLINES.

Grassley's spokesperson says the only things they talked about in their two-minute call were corn, the hurricane and Terry Branstad, the former Iowa governor who is now ambassador to China. AND THAT'S IT. Trump didn't try to obstruct justice in the Senate's investigation by saying, "Hey, go easy on my boy, OK?" He just called him out of the blue to bribe him with hot hard #CornTalk ... which could in and of itself be obstruction of justice, considering where Grassley's G-spots are.

TRUMP: Money to Iowa for corn and ethanol stuff!

TRUMP: There's definitely not anything else I want to talk to you about, especially anything that might interfere in the Russia investigation in your committee, where my son will be testifying in a very short period of time.

GRASSLEY: Did you say something? I am having MULTIPLE CORN-GASMS!

GRASSLEY: Iowa is full of the most cows!

TRUMP: I tried to grab the Iowa State Fair Butter Cow by the pussy during the campaign, but I couldn't get there.

GRASSLEY: Did you at least take her furniture shopping first?

TRUMP: No, she was married. And I knew that. But I did it anyway. Anyway, that hurricane had the biggest water in it ever. A lot of people don't know hurricanes are full of water.

GRASSLEY: Water is good to the corn! Hey, how about that Terry Branstad?

TRUMP: He is my ambassador to GIIIIIINA. Good man. Anyway bye.

TRUMP: Me too! OK hanging up for real now.

GRASSLEY: No I'm hanging up.

And that was the end of the only conversation Donald Trump will have about ethanol for the rest of his presidency, which had NOTHING to do with dumbass Junior's impending testimony before Grassley's committee.

Anyway, Chuck Grassley probably should recuse himself from the Russia investigation now. We're sure Dianne Feinstein can run it on her own.

Wonkette salaries are fully funded by lovely souls like you! If you love us, click below to fund us!