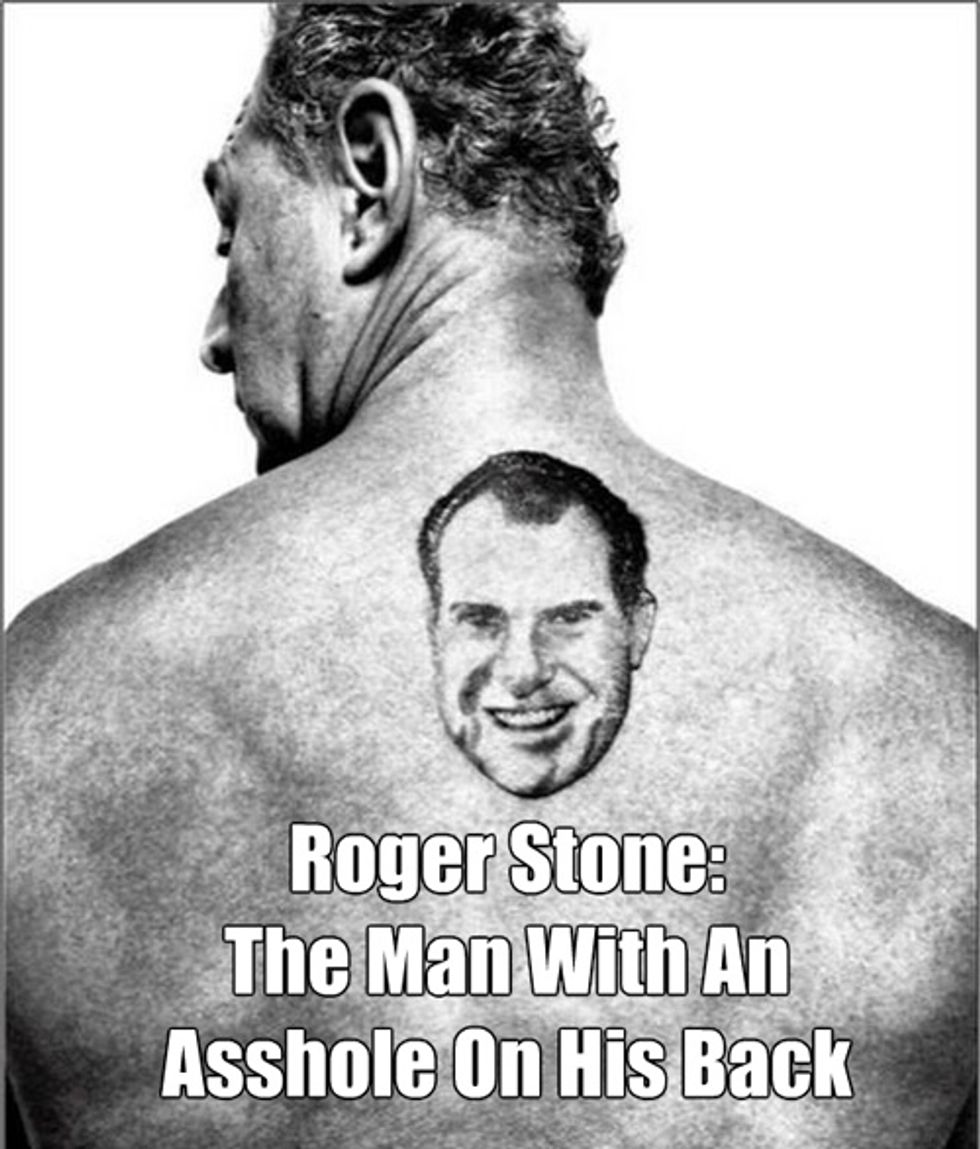 Poor man has a schmuck between his shoulders.

[wonkbar]a href="http://wonkette.com/600611/perfectly-sane-researcher-just-asking-if-ted-cruzs-jerk-daddy-killed-kennedy-yes"[/wonkbar]It must be Stupid Conspiracy Theory Week on Yr Wonkette, because hot on the heels of Wednesday's revelation that Ted Cruz's dry-drunk evangelist dad might have killed JFK (although the True Science Fact is that Woody Harrelson's dad and George H.W. Bush did it), we also learned that former Donald Trump campaign advisor Roger Stone is writing a book explaining that Bill and Hillary Clinton murdered JFK Jr. in 1999. Stone, a flamboyant practitioner of the dark political arts who was either fired from or quit the Trump campaign last summer (and is mostly infamous for the Nixon tattoo on his back), casually mentioned his writing project on an internet radio show last month.

[wonkbar]a href="http://wonkette.com/600397/trump-pal-roger-stone-promises-anti-trump-rnc-delegates-room-service-with-fists"[/wonkbar]In an interview with catch-all conspiracy fan James Fetzer, who believes that the Holocaust, 9/11, and the Sandy Hook shootings were all faked by shadowy groups bent on world domination, Stone praised Fetzer's work, telling Fetzer "there's really nobody in the researcher community that I respect more than you." Quite a compliment coming from the clearly starstruck Stone, an expert political ratfucker whose own plots are a bit more mundane, like threatening to send Trump supporters to the hotel rooms of any Republican Convention delegates who switch their votes from Trump. At least Stone's own tawdry little escapades, like taking part in dirty tricks against Democrats in the 1972 elections, actually happened.

Stone listened raptly to Fetzer explain 9/11, which "was brought to us by the CIA, the neocons in the Department of Defense, most of whom...were dual U.S.-Israeli citizens, and the Mossad." So, you know, he's a smart guy. To impress Fetzer with his own mad research skillz, Stone explained he's got two books in the works: one exposing New Jersey Sen. Cory Booker as a fraud who never actually accomplished anything, and then his really explosive work:

I have coming up next year a book which I make the case that John F. Kennedy Jr. was murdered. And he was murdered by the Clintons because he was in the way. Now I have extraordinary new evidence that nobody else has seen.

Mere sheeple in the reality-based community may believe the findings of the National Transportation Safety Board investigation of the crash, which killed Kennedy, his wife Caroline Bessette Kennedy, and her sister, Lauren Bessette, as Kennedy piloted the plane on approach to Martha's Vineyard, Massachusetts. According to the NTSB, the probable cause of the accident was the "pilot's failure to maintain control of the airplane during a descent over water at night, which was a result of spatial disorientation. Factors in the accident were haze and the dark night." But that's an awfully boring way for a Kennedy to die, so of course it had to be a political assassination. Last fall, Stone tweeted that he planned a book on Kennedy's "murder" and also explained the motive: Hillary had him bumped off because she wanted to be elected to the Senate seat previously held by Daniel Moynihan, and since Kennedy was thinking of running for it too, he had to die:

This only makes sense, as the recent ax murders of Bernie Sanders and Martin O'Malley proved.

Stone even previewed some of his astonishing evidence (which to the untrained ear may sound like "pure speculation") on another internet conspiracy show in March, explaining that "almost everything you’ve been told about his plane crash and death is false or embellished or cooked."

The truth is, John Kennedy was preparing to run for the United States Senate; he was going to use it as a springboard to run for the presidency. And he wanted to be president to uncover who had murdered his father, something that had burdened him his entire life [...]

He had confided to a number of New York Democrats who I interviewed that he was gearing up to run. And he was therefore in the way. When Hillary went out among Democratic chieftans to begin testing the water, a number of upstate bosses told her they were already committed to John Kennedy, Jr, to which she scoffed, "Don't worry about that. That will take care of itself."

Shortly after Kennedy's death the New York Daily News reported he'd considered a Senate run, but dropped the idea when Clinton announced her candidacy. Or maybe not, since as Stone explains, he was murdered:

Now, we know that John Kennedy's plane did not descend as if it lost an engine and crashed; it blew up in midair. There are at least two witnesses to that.

Needless to say, those liars at the NTSB, who examined the recovered wreckage of Kennedy's single-engine Piper Saratoga II, must have been lying when they wrote:

Examination of the wreckage by NTSB investigators has revealed no evidence of an in-flight break-up or fire, and no indication of pre-impact failure to the airframe [...]

Visual examination of the propeller at the hangar indicated the presence of rotational damage ... No evidence was found during the examinations of conditions that would have prevented either the engine or the propeller from operating.

In other words, the engine was running and the propeller turning when the plane hit the water. Or so the NTSB would have us believe. In the online interview, Stone didn't explain how Hillary Clinton managed to get the NTSB report fudged, but given that the Clintons have murdered almost 50 people who got in their way, Bill probably just dictated the results of the inquiry to the NTSB.

Stone goes on to explain that Kennedy was a highly experienced pilot with "a greater number of hours as a pilot than you have been told," and that the weather was perfectly clear, so there's no way he possibly could have become disoriented and crashed (mere reality: accident rates increase at night, even among experienced pilots, even in clear weather). If you believe the liars at Wikipedia, Kennedy didn't have his instrument rating as a pilot, although conditions were still legal for visual flight only. However, he was flying at night over open water, with few visual cues to the horizon or his altitude.

Stone also claims "Immediately upon this plane going down, for the first time in U.S. history, the investigation is shifted from the FAA to the U.S. Air Force. Why?" In an admittedly cursory online search, we couldn't actually find anything of the sort; perhaps Stone is referring to the use of Navy ships in searching for the wreckage -- controversial at the time, since such assets wouldn't normally be used for a missing private plane -- or the fact that once it was recovered, the plane's wreckage was stored in a Coast Guard hangar at Otis Air Force Base -- where the investigation was carried out by the NTSB, which investigates all civilian plane crashes. That's what the government-controlled media tell us, at least.

Oh, yes, and in Stone's telling, when Sen. Edward Kennedy called the White House at "three in the morning" the night of the crash to demand a search be started, Bill Clinton dismissively said, "Yeah, we'll get right on it." That rat bastard.

So, yeah, that's one hell of a conspiracy theory. All you need are these unnamed witnesses who saw the plane explode and never told the NTSB (or maybe they were threatened or even murdered by the Clintons), an NTSB investigation that had to have been faked, and of course, the relentless political ambitions of Hillary Clinton, who murders people at the drop of a hat in the ring. We can hardly wait for the eventual book, assuming Hillary even allows it to be published. Strangely, Roger Stone isn't in hiding.

You'll never guess the surprise twist: the actual henchmen who hid the explosives in Kennedy's plane will turn out to be Woody Harrelson's son and Jenna Bush.