Trump Building Walls In Ireland Too 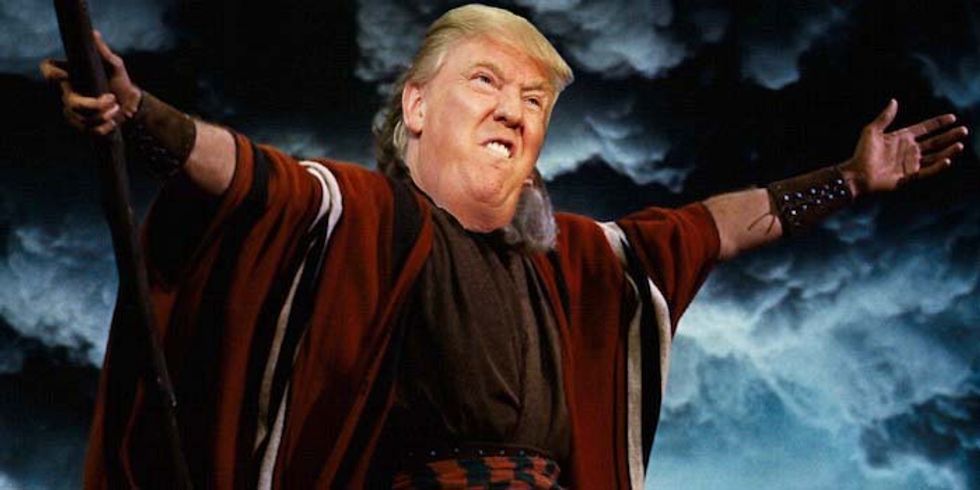 Hey, Planet Earth! If you're looking out from your shithole of a country at our GLORIOUS U.S. election and thinking, "Damn it! I want a pathological liar leading my racist and socially repressive movement too," you're in luck! After he builds his wall to keep out those darn, dirty Mexi-Cants, Donald Trump is hopping on over to the birthplace of whiskey to dropkick Mother Nature's fickle ass, and knock out climate change once and for all! All aboard the Trump Train, next stop, Pound Town!

According to Politico, Trump's Irish golf resort -- no, not the Scottish one where everyone hates him, the Irish one where everyone hates him -- is on the the verge of being slowly swallowed by the sea because of rising ocean levels (otherwise known as climate change), which Trump has previously called, "pseudoscience," "a total hoax" and "bullshit."

When bullshit freezes it's much easier to pick up.

And yet, according to Politico, the Trump International Golf Links Ireland resort has applied for a permit to build a 200,000 ton, 13-foot rock wall along two miles of beachfront, specifically citing soil erosion and extreme weather forecasts in its proposal. The application was denied by the Irish national government, presumably because some drunk potato farmer in a Truck Fump shirt was all, "Screw you!" but however they say it in Irish. Trump's resort has since re-submitted the plans to the Irish Clare County Council for consideration because he's a winner, and winners don't to take shit from rainbow-riding leprechauns.

Ever contradicting the candidate's own words, the permit plans acknowledge a report by the Irish Department of Geography and the Coastal and Marine Resources Centre that states as much as 30 percent of Irish coastline could erode within the coming decades, but TGIL says that the study does not acknowledge the effects of climate change. The resort has been trying to win the hearts and minds of locals through pamphlets that recognize the mean sciencey stuff those eco-nerds talk about.

“If the predictions of an increase in sea level rise as a result of global warming prove correct, however, it is likely that there will be a corresponding increase in coastal erosion rates not just in Doughmore Bay but around much of the coastline of Ireland. In our view, it could reasonably be expected that the rate of sea level rise might become twice of that presently occurring. … As a result, we would expect the rate of dune recession to increase.”

Earlier this year, Trump tapped science hater and congress-weasel Rep. Keven Cramer of North Dakota as a key energy policy adviser. Cramer famously wrote Trump a four-page homework assignment that came to the earth-shattering conclusion that America is good, and energy is good, so American energy must be the best energy. Trump, however, hates any energy policy that makes his resorts look icky.

Trump has already threatened to close the resort if Ireland doesn't let him build his damn wall, claiming that a failure to act could result in the loss of million of euros. Since buying the resort in 2014, it is shaping up to be just another failure in a string of failures.