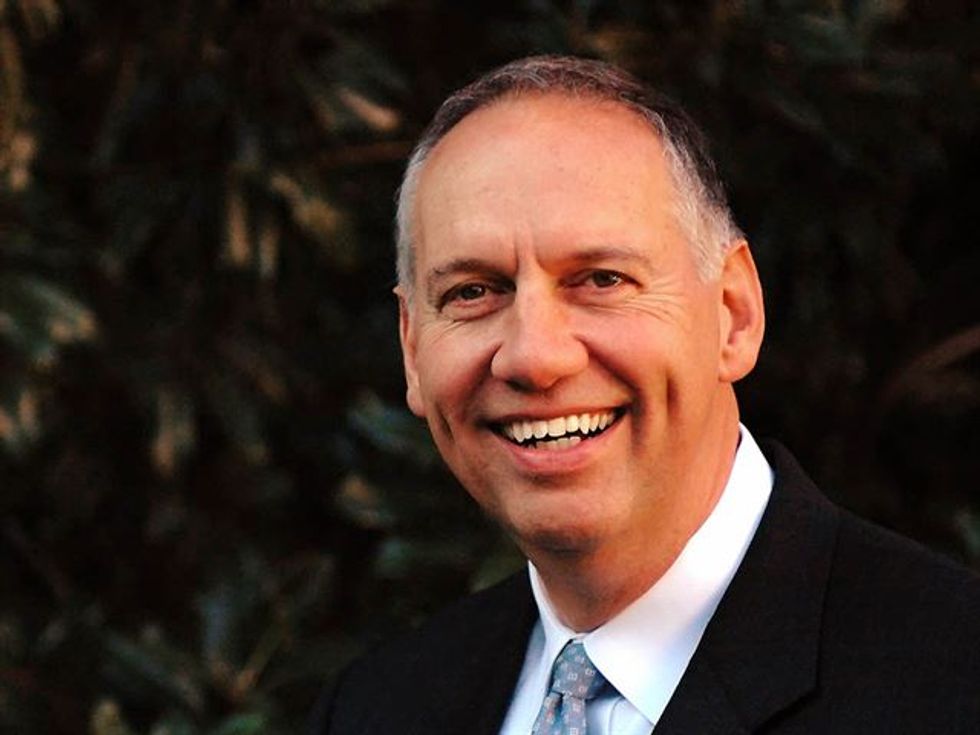 Every Wednesday, in an undisclosed location, Mike Pence, Betsy DeVos, Mike Pompeo, Rick Perry, and Jeff Sessions gather together to eat milk and cookies and study their Bibles with Ralph Drollinger, a guy who played six games of professional basketball 40 years ago and is now a pastor. A BBC profile of Drollinger, published this weekend, gets into some of the wisdom he is dropping to Trump cabinet members.

Drollinger and his wife run a thing called Capitol Ministries, the entire purpose of which is to dispatch pastors to state capitols in order to have them lead Bible studies with politicians. There are no female pastors in this program, because -- according to Drollinger -- Jesus is not cool with ladies leading Bible studies.

Wow! That sure is convenient for men! "See, honey? Jesus says I get the remote. It doesn't mean you're of lesser importance, it just means I get to be in charge of everything. You are important in that, without you, there would be no one to unquestioningly do what I say! And what fun would that be?"

Drollinger, who claims he is not a Christian Nationalist, has some other interesting beliefs as well, like how God feels really adamantly that same-sex marriage is a bad thing and mentioned it like a thousand times in the Bible even though that wasn't even an issue at that time, and also how God invented free market capitalism.

On same-sex marriage, he writes: "Homosexuality and same-sex ceremonies are illegitimate in God's eyes. His word is repetitive, perspicuous [clearly expressed], and staid on the subject."

On capitalism, he writes: "The right to personal property, also known as free enterprise or capitalism, is the governmental economic system supported by scripture. Scripture does not support communism."

Now, I may be just a simple country atheist with a Catholic extended family and a deep knowledge of the collected works of Andrew Lloyd Weber, but aren't nuns communists? Like, literal communists who live in communes, collectively share their wealth, and reject the trappings of capitalism? Is Drollinger suggesting that god hates NUNS? Also, if God loves capitalism so much, why didn't Jesus sell all the fishes and wine instead of just handing them out to people -- like a commie? Also, also -- if God hates communism, why are people always praying to him for stuff?

I don't know about you, but this scene from Jesus Christ Superstar leads me to believe that Jesus was not actually all that into capitalism as a religious tenet.

Of course, when asked if we should put gay people to death, Drollinger explains that there is not a need to support things in the Old Testament that don't poll so well these days.

So if politicians should learn from the Bible, should - for example - gay people be put to death? No, says Drollinger - some civil laws from the Old Testament should not apply.

"I think that was for [ancient] Israel, but it's not for the church," he says, adding he doesn't import "the whole kit and caboodle of Old Testament law" like "the clumsy theonomist would".

But does Trump attend these meetings? He does not! He does, however, get printouts of the materials, after which he sends Drollinger exceedingly vague but encouraging notes.

President Trump is not a member of Drollinger's group - but he is a Christian, and does get Drollinger's eight-page print-outs most weeks.

"He writes me back notes on my bible studies," says Drollinger.

"He's got this leaky Sharpie felt-tip pen that he writes all capital letters with. 'Way to go Ralph, really like this study, keep it up.' Stuff like that."

Surely he's reading all of those eight-page printouts of Bible study meetings. That's definitely happening. Given the content of what he's teaching, however, perhaps Ralph ought to consider simply sending Trump a one-page printout that says "Congratulations on God thinking you are right about everything! Way to go, Donald!"