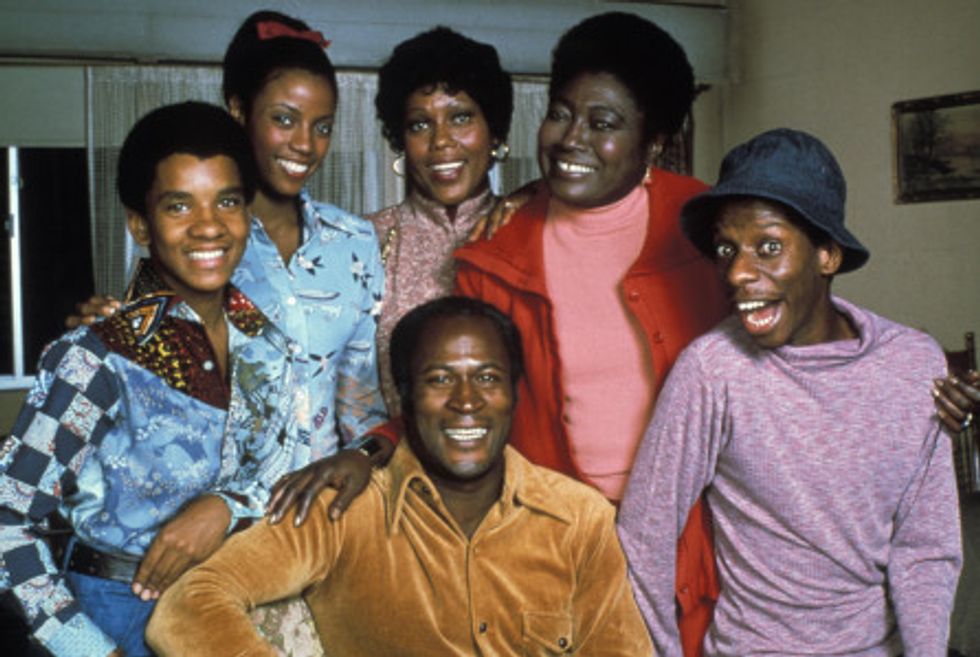 As you may have noticed, the last week or so has featured a lot of talk from Donald Trump about what he will do to help "the African-American Community," which he always pronounces very carefully as if reading off a foreign language card. He wants the African...American...Community...to know that Hillary Clinton and the Democrats only see black voters as tools to remain in power, while Donald Trump cares very deeply about his African-American, and all the other ones, lately.

Problem is, he's been making these appeals before the usual Trump audiences, which tend to be primarily pinkish in hue, if not politics. As pretty much everyone has pointed out, Trump isn't actually trying to appeal to actual African-Americans; he's pretending to care about blacks because maybe he'll make a few white Republicans -- who have by and large figured out racism is bad -- start thinking maybe he's not the nasty racist the unfair media and his own relentless dogwhistles make him out to be. (A small digression: Jonah Goldberg at the National Review doesn't think that's necessarily a bad thing, since even cynical motives can have nice outcomes.) But if Donald Trump were really interested in black voters (which everyone knows he isn't but he has to make the pitch because candidate wrangler and campaign manager Kellyanne Conway is forcing him to), why hasn't he taken it directly to black voters? You'd think they'd just be wild about his pitch, which is so very persuasive:

We bet a lot of African-Americans would just love Donald Trump to come to the ghettos where they all live and rap with them about that, since they're just sitting around on the couch being unemployed, drinking malt liquor, and dodging bullets anyway. Some might even let him touch their funny hair!

Donald Trump Risks His Life To Yell At Messicans

In any case, "former" Trump staffer Corey Lewandowski explained to his new coworkers at CNN why Donald Trump has been talking about The Blacks to mostly white audiences, at rallies in white suburbs, instead of actually going to talk to The Blacks: It's because blacktowns are way too dangerous for Donald Trump to visit! Sure, maybe he was willing to take his life into his hands and go to The Border, where he was in extreme danger of being kidnapped or shot or raped by all the Mexicans, but he's no fool. As part of a CNN panel hosted by Anderson Cooper Monday, Lewandowski explained Donald Trump knows exactly what happens when a nice white boy tries to go to N-Town:

You know what’s amazing to me is that no one remembers Donald Trump went to go have a rally in Chicago at the university. And do you remember what happened? It was so chaotic and it was so out-of-control that the Secret Service and the Chicago Police Department told him you could not get in and out of the facility safely. And that rally was cancelled. And you've shown the footage many times of the individuals that attended that rally.

We're going to be all fact-checky here and note a couple things: First off, the footage inside the cancelled rally mostly showed Trump supporters whaling on protesters. And no, the Chicago Police Department explicitly said they hadn't been consulted on whether to continue or cancel the rally. Not that more outright lies from Corey Lewandowski matter all that much.

The other panelists asked just what that had to do with "communicating with the black community," but Lewandowski was having none of it: You hold a Trump rally in a black neighborhood, there's gonna be trouble!

Look! That is a black community. He went to the heart of Chicago to go and give a speech to the University of Chicago in a campus which is predominately African-American to make that argument. And you know what happened? The campus was overrun and it was not a safe environment. That's what happened!

Again, he left out a few things, like Trump's having pined (again) earlier that very day about the good old days when it was perfectly OK to beat up on protesters. And no, the arena was not "overrun" by dusky hordes of Hottentots out for the blood of the white man, although there were more than the usual number of protesters on the floor. Also, the protesters were not all black, although in retrospect, they clearly have become so.

Panelist Angela Rye tried to inject the possibility that there are in fact other places besides Chicago where black people live: "Would you acknowledge that not all black communities all over the country are still not monolithic. So if he tried the same thing in Cleveland, it wouldn't necessarily happen?" We think she's missing the point, which is that it might be very difficult to round up any sizeable number of black Trump supporters for a rally. You might fill a high school gym if you flew every black Trump supporter in from all over the country.

Who Would Donald Trump Like To Punch In The Face Today?

Lewandowski had a narrative to stick to, and he stuck to it: We tried it in Chicago, we were overrun by scary black people, and Trump will never make that mistake again: "So whose fault is that that that particular event in Chicago was completely destroyed?" Ooh, let's say maybe it had something to do with packing a bunch of amped up Trump supporters into an arena after a week or two of wishing you could punch protesters in the face and having them carried out on stretchers, and then sending a guy to the mic to say only that the rally was cancelled, and adding "Go in peace" as if Mass had just ended? And then there's the detail that, unlike most Trump rallies, security allowed in large groups of protesters, leading some to speculate that Trump never intended to attend the rally at all, but to set up a contentious situation and watch it play out. We aren't sure he's bright enough to do anything involving that much forethought.

Donald Trump's $100K Mar-A-Lago Memberships Open To Everyone, Even Blacks And Jews

The CNN panel then descended into a shouting match about how Trump let blacks and Jews into Mar-a-Lago, and Corey Lewandowski just barely escaped being torn to pieces by the two black women on the panel. Those people are scary.