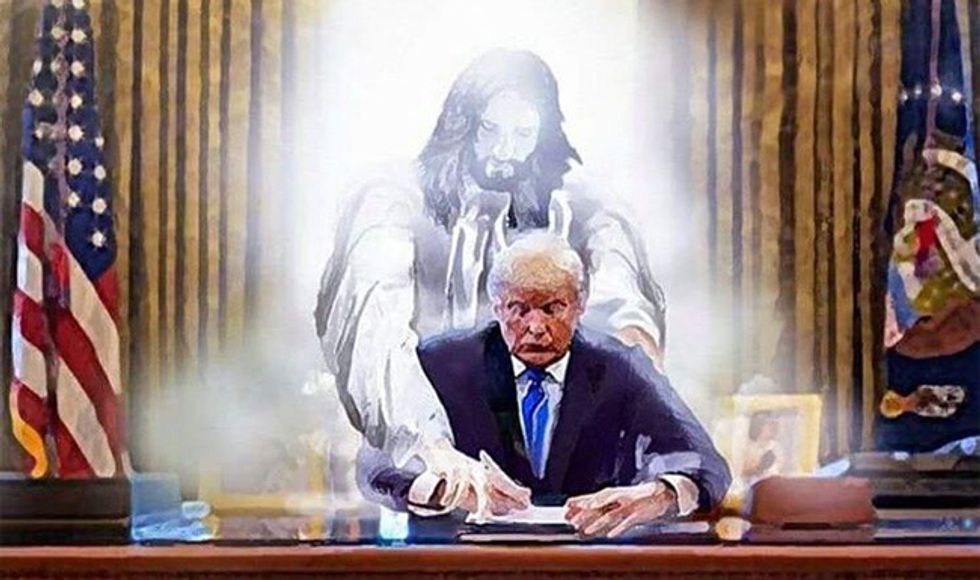 'Dang, Donald, it's really hard to get a good hold on your tiny little hand!' 'Shut up, Jesus.'

If you want to celebrate the National Day of Patriotic Devotion officially proclaimed by Mad President Snapcase, you'll need a time machine: The proclamation applied to Friday, the day of Donald Trump's inauguration, but was only published in the Federal Register, making it official, on Monday. That's OK, if you joined us here at Wonkette for the inauguration livebloog, you probably observed the National Day of Patriotic Devotion with heavy day-drinking, the same as you celebrate every holiday. But let's take a close look at what we were all drunkenly celebrating, even if we didn't know it!

The proclamation was probably written by Steve Bannon and Stephen Miller, who also reputedly perpetrated Trump's "self-written" inaugural speech, because there's no way in the world Donald Trump would pull off sentences with even this level of complexity:

A new national pride stirs the American soul and inspires the American heart. We are one people, united by a common destiny and a shared purpose.

Freedom is the birthright of all Americans, and to preserve that freedom we must maintain faith in our sacred values and heritage.

There are no greater people than the American citizenry, and as long as we believe in ourselves, and our country, there is nothing we cannot accomplish.

NOW, THEREFORE, I, DONALD J. TRUMP, President of the United States of America, by virtue of the authority vested in me by the Constitution and the laws of the United States, do hereby proclaim January 20, 2017, as National Day of Patriotic Devotion, in order to strengthen our bonds to each other and to our country -- and to renew the duties of Government to the people.

We especially like the line about how peace is impossible without prayer. Must explain why all those Scandinavian socialist countries that are full of atheists are constantly at war with each other, while the most religiously devoted spots in the Middle East and Africa are such oases of faith and peace. Or will be, once the unbelievers are put to the sword.

As the Atlantic points out, that stuff about American community doesn't sound like Trump, who usually focuses on himself and what he can do to make America great again, because he makes the best deals. All that patriotic devotion boilerplate sounds like pure Bannon jingoism, with the sacred values and heritage and purity of essence. Or you might prefer The Guardian's take, which compares the rhetoric to that of North Korea, and reminds us Trump really wanted tanks and missile launchers in his inaugural parade. Trump is the state and the state is Trump. You have a problem with that? Why do you hate America?

Now, if Trump had written the thing himself, it would have been dictated, and would sound like this:

America! It's the best, am I right? And what makes us the best? Our people! Except for the dishonest media. There's nobody more dishonest than our media. I can't believe the lies they get away with.

And freedom! I love freedom! America's the only place you can really be free. If you don't believe that, you can get the hell out.

Can you believe what a great Constitution we have? It's the best! I love the Constitution, big-league. Other countries wish they had a Constitution like ours, but ours is the best. I have a copy of it given to me by a great American, Mad Dog Mattis, the best general since Patton. Now George Patton, there was a guy who loved his country. But you know who doesn't love America? The failing New York Times. How they're even still in business I don't even know. It's because they lie, and a lot of people believe their lies. Not any more. On Day One, that ends.

And we're gonna build a beautiful wall to keep America for Americans. And Mexico's gonna pay for it. Don't get me wrong, I love the Mexican people, but they're killing us. We don't win anymore. With Trump, you're going to win again.

NOW, THEREFORE, I, DONALD J. TRUMP, I still love the sound of that, don't you? "Donald J. Trump, President of the United States of America." They said we couldn't do it, but we showed them. [fifteen minute recap of Republican primary and election night redacted] Anyway, I proclaim this day, January 20, 2017, a National Day of Patriotic Devotion. Even for the Crooked media, but they better watch themselves.

And then we'll take their oil. We should have kept the oil.