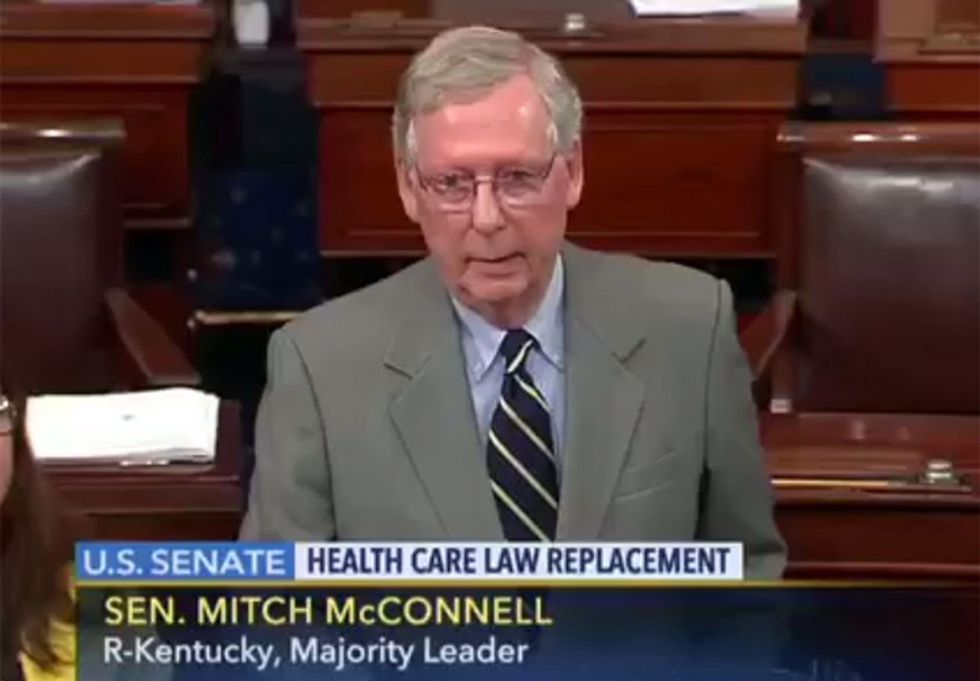 Yup. Gonna have to start all over. Or pull something evil. I'm good at evil. Yup.

Not only is the Better Care Reconciliation Act dead; as of this afternoon, with three Republican women saying a very definite "up yours," so is Mitch McConnell's purely-for-appearances "plan" to repeal the Affordable Care Act and then write a replacement when Republicans get around to it. We wouldn't say the ACA is safe by any means, since now Donald Trump is once again talking about "letting ObamaCare fail," which means he'll push it out the closest Overton Window if he possibly can. But let's take a few minutes to enjoy some of the better reactions out there, starting with Trump his ownself. Here are some thoughts he twote this morning:

Yep, those darn unhelpful Democrats kept Republicans from passing a bill with majorities in the House and Senate. That's because we're magic, you see. And the way to fix losing a simple majority when you hold the majority? Get rid of the filibuster, which was never in play, and convince Americans to elect MORE Republicans who'll do them the favor of ending their health insurance. This man is smart!

Of course, Donald Trump also has a Twitter history, so credit to MSNBC producer Kyle Griffin for discovering today's episode of Donald Trump From The Past Contradicts Donald Trump Today, with this gem from September 26, 2012, with replies all from today:

A little later in the day, Trump explained that if you use special Trump Math, the majority actually won the day:

Trump on Senate GOP: “The vote would have been pretty close to, if you look at it, 48 to 4. That's a pretty impressive vote by any standard" pic.twitter.com/Deuy2g1gvf
— Bradd Jaffy (@BraddJaffy) July 18, 2017

Considering Democrats' absolute opposition to that bill, Trump said he was still pleased with how close the legislation had come to passage. “Essentially the vote would have been pretty close too, if you look at it: 48 to 4," said Trump, referring to the Republican side only. “That's a pretty impressive vote by any standard."
“You need more ― that's pretty tough," he added.

Once you delete the Democrats and assume no other Rs would have flipped, it was an OVERWHELMING 48 to 4 victory. What we want to know is, are his moving goal posts Made In America?

In yet another no-cameras press briefing, Sarah Huckabee-Sanders had an insight about the death of the Senate bill:

The Denial is strong with this one.

Buzzfeed writer and editor David Mack was just one of several folks having fun with this Fox News chyron:

To which U of Miami political science prof Gregory Koger had a perfect reply:

Oh, and then there's Mitch McConnell, who had some thoughts about the big picture:

Oh, but the True Believers have just about had it with these clowns in Congress -- what a bunch of clowns!

And finally, there's this, which we think we are in love with:

Why, Senator Murkowski, we had no idea you had such a flair for metaphor. We may have to subscribe to your newsletter.

Yr Wonkette is supported by reader donations. Please click the "Donate" linky and help us keep all our frogs in the wheelbarrow.