Trump Definitely Not Racist This Time 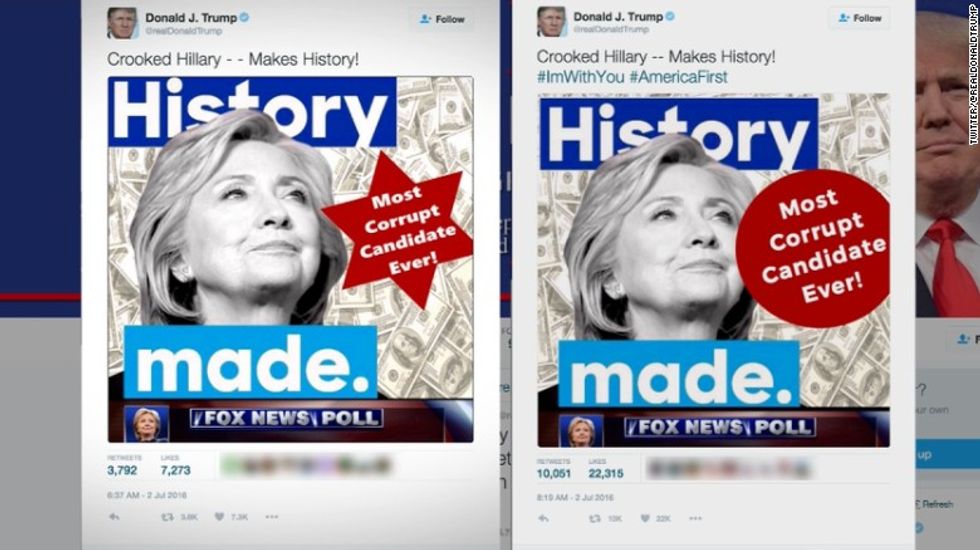 Did you leave the house this weekend for funtimes and splodey things? Did you not turn on your infernal computing machine even once, except for pr0n? Did you manage to wake up this morning without having heard about Mister Donald J. Trump Esq., MD, Ed.D, and how he is definitely not racist this time, just because his former caddie and current social media maven accidentally tweeted out a picture of Hillary drowning in piles of cash and Jew Stars? What a wonderful weekend that must have been. Congratulations, sir or madam, you are living your best life.

But now it is Tuesday, and there are no more sparklers or prOns, and you get to hear allllll about it. Congratulations, sir or madam, despite your best intentions, you are still living on Earth in the year of our lord 2016.

Above is the definitely not racist tweet in question. The Trump campaign has had more explanations for it than Jeb Bush had positions on the Iraq War.

Then they said "MICROSOFT SHAPES! NOT JOOO! SHERIFF!"

Then in the very same statement Trump's caddie, Dan Scavino (no, really, his caddie), either claimed authorship of the image ("The sheriff's badge -- which is available under Microsoft's "shapes" -- fit with the theme of corruption, which is why I selected it") or is very bad at making words, which is acceptable in a caddie but not so much in a social media director.

Then Corey Lewandowski -- the former Trump campaign manager who opines on the Trump campaign for CNN despite reportedly being contractually barred from criticizing the Trump campaign -- said AH HA! Mister Donald Trump cannot be anti-semitic, he has a Jew lawyer! (Not to mention the "short guys in yarmulkes counting [his] money.)

And then Mister Donald J. Trump, MA Literature and Poetry, had to spend all of the Fourth of July tweeting mad things about NUH UH HILLARY CLINTON IS CORRUPT AND ALSO MY DAUGHTER IS JOOO instead of going and being gross in the vicinity of some potato salad and his weird family. They probably said some more stuff by now but I don't care. Sad.
Rebecca Schoenkopf