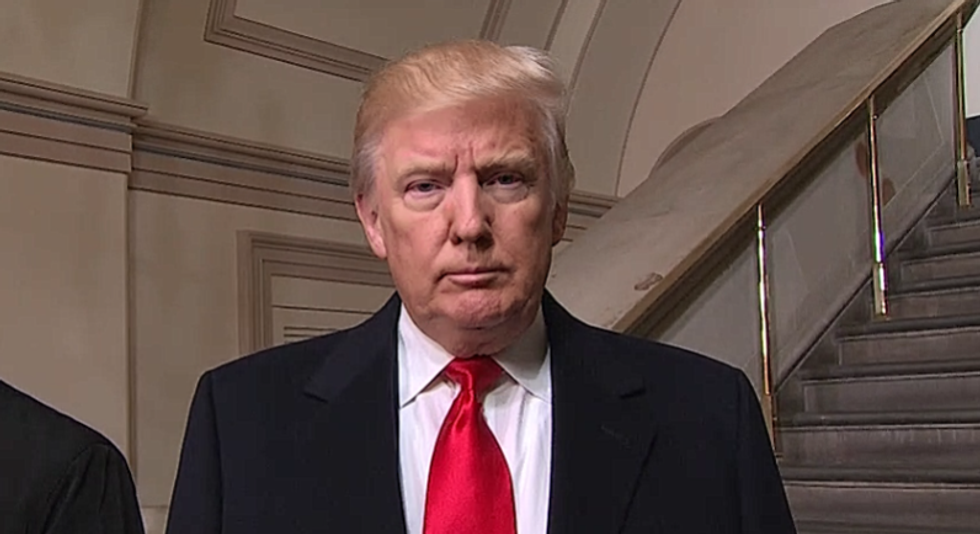 Donald Trump had a press conference with Israeli Prime Minister Bibi Netanyahu today, and because the press has found its balls all of a sudden someone actually asked Donald Trump about the rise of (public) anti-Semitism, and how his campaign and administration have played footsie with all those "alt-right" (Nazi) racist frogs. Whaaaaat? We KNOW!

Since your election campaign and even after your victory, we've seen a sharp rise in anti-Semitic, anti-Semitic incidents across the United States. And I wonder what do you say to those in the Jewish community in the States and in Israel and maybe around the world who believe and feel that maybe your administration is playing with xenophobia and maybe racist tones?

Nonetheless, Donald Trump, the president of the United States, searched inside himself for an answer.

"I have seen what you are talking about," he said soberly. "During the campaign, a number of young people took it upon themselves to unleash anti-Semitic hatred on reporters, using Nazi tropes and memes wishing people into ovens. And since my own beloved daughter converted to Judaism, I've been faced with the fact that there are dark corners of the Internet dedicated to wiping out people like her and my beautiful grandchildren. This is not only a shame, it is a shanda. I categorically reject anyone who says they're on our side -- like David Duke, and Stephen Bannon -- who would use that hatred for political gain."

Haha, Wonkette just did Fake News at you, like a common Wonkette! (You could tell because the sentences' clauses were all complete.) Here is what Donald Trump, the president of the United States, actually said:

Well, I just want to say that we are, you know, very honored by the victory that we had. 306 electoral college votes. We were not supposed to 220. You know that, right? There was no way to 221, but then they said there’s no way to 270. An there’s tremendous enthusiasm out there.

I will say that we are going to have peace in this country. We are going to stop crime in this country. We are going to do everything within our power to stop long-simmering racism and every other thing that’s going on, because a lot of bad things have been taking place over a long period of time. I think one of the reasons I won the election is we have a very, very divided nation. Very divided. And hopefully I’ll be able to do something about that. It was something that was very important to me.

It's all about the love! For the beautiful grandchildren, and the short men in yarmulkes counting his money, for the people who bore the vast brunt of the Holocaust ... well, maybe not them so much.

In other Trump-Netanyahu press conference news, Donald Trump had thoughts on the Two-State Solution.

"I'm looking at two states and one state, and I like the one both parties like," Trump told a joint news conference with Netanyahu. "I can live with either one."

Donald Trump knows as much about the Two-State Solution as he knows about the life and works of Frederick Douglass. Mr. President, you're doing just a tremendous job!