Trump Golf Course Only 'Storing' Ugly Trump Painting For Charity, As One Does 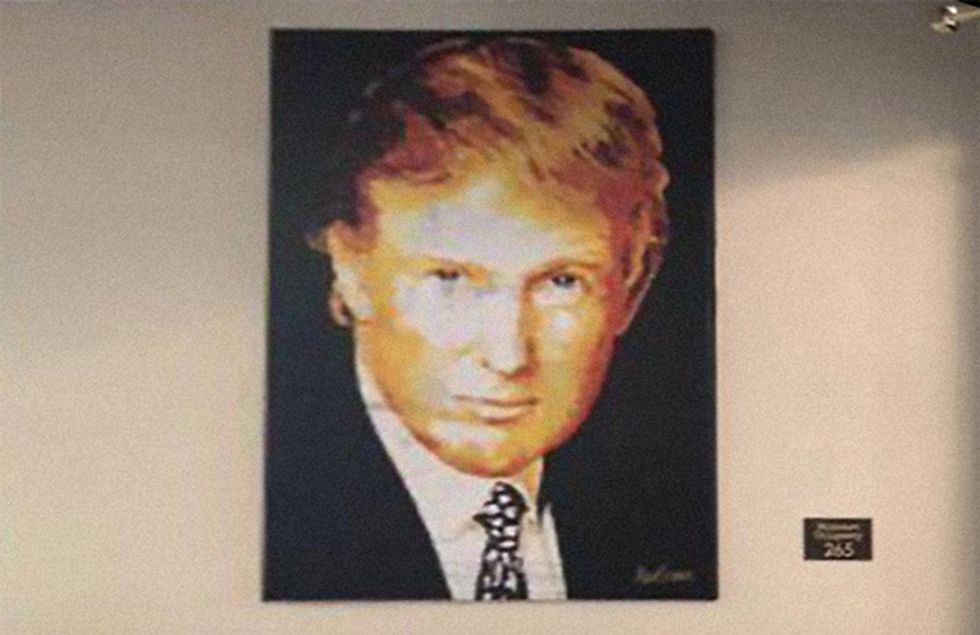 The eyes seem to follow your lawyer around the room

We got a whole new version of the fun goings-on at the Trump Foundation Tuesday, as Trump campaign senior advisor Boris Epshteyn went on MSNBC to thoroughly refute all this reporting David Fahrenthold has been doing about the legally dodgy stuff Donald J. Trump has been using the Donald J. Trump Foundation for, like paying off Trump's legal settlements or buying ugly crap in charity auctions.

See, the IRS takes a dim view of using funds from your charity to benefit the people who run the charity -- it's called "self-dealing," and it isn't legal. Which might create a bit of a problem for the Donald J. Trump Foundation, which bought an autographed Tim Tebow helmet and jersey and two paintings of Donald Trump at charity auctions, and paid for them with money from the foundation. Probably not kosher under IRS rules, even if the money went to another charity, because the items purchased needed to be used for charity, too. Instead, one of the paintings is on display at Trump's Doral National golf course in Florida, while the exact locations of the other painting and the Tebow helmet are uncertain. (It is certain neither is being used to send poor kids to summer camp.) Poppydash and baldercock! said Mr. Epshteyn in an interview with MSNBC's The Place For Politics. And there's nothing funny going on when Donald Trump's appearance fees end up going to his foundation, either, no not at all. This Fahrenthold is naught but a mug, a chump, a two-bit grifter, that's all he'll ever be:

Boris Epshteyn: David Fahrenthold's a joke. He's been working on this for six months, and he has absolutely no facts to back anything up.

Hallie Jackson: But you, yourself, I think acknowledged this Comedy Central, for example, the donation that was made to the Trump Foundation --

Epshteyn: There was no issue there. There was no -- Comedy Central paid Trump Productions. Trump Productions paid income tax, and then Trump Productions donated the money to the foundation. Here's the key. We are talking about here money that's gone into Mr. Trump's foundation, and the money that's gone to great causes, causes like the Police Athletic League, Susan G. Komen Foundation -- by the way, the helmet he's talking about -- by the way, I've been to Donald Trump's office. He's got helmets from here to Timbuktu. He doesn't need to buy Tim Tebow's helmet. That was at a charity auction. So Mr. Trump went to a charity auction, the money went from a foundation to a charity.

Oh, well that's new at least. The Tebow helmet is in Trump's office? Donald Jr. said he thought they'd given it to a kid, all charitable-like.

Jackson kept pressing because simple answers like "You're wrong" and "That's full of inaccuracies" don't seem to satisfy these media jackals, who keep wanting to know what exactly was wrong or inaccurate, as if they deserved an answer.

Epshteyn: What's inaccurate is that he's reaching. He just said, "it could be improper." That's like me saying, "Hallie, I know you didn't commit murder, but if you did somehow, it'd be a problem." Mr. Fahrenthold doesn’t have one example of any issue.

Jackson: That's not a similar analogy though.

Or IS IT? How do we KNOW Hallie Jackson isn't really the Zodiac Killer, and has just been blaming Ted Cruz all along? Despite Epshteyn's zinger, we should note that Fahrenthold has a bunch of tax records from the Trump Foundation, which are definitely more than "nothing." We also like how Epshteyn twists Fahrenthold's very careful libel-avoiding "may have" into a reason to suggest the whole story is made up. Careful reporting? Pfahh -- more like lies and innuendo!

Then Epshteyn rolled out his brand new explanation for why it's OK for Trump-owned businesses to be displaying items bought with foundation money: It's not self-dealing if the Trump businesses are merely storing those items for the Foundation, which, after all, doesn't have its own office anywhere:

Epshteyn: Let me finish. On the helmet, on the painting, there are IRS rules which specifically state that when a foundation has an item, an individual can store those items on behalf of the foundation in order to help it with storage costs.

Jackson: So is he storing the items? Is that what he's been saying?

Epshteyn: They're storage costs, and that's absolutely proper. Again, everything Mr. Trump has done is within all applicable rules and regulations, in accordance with his business, and in relation to the foundation. And Mr. Fahrenthold, again, had not one example of any issue. And he said it "could be an issue."

Jackson: Let me just clarify one point though, Boris, before we move on. So the portrait that is hanging of him at his golf club in Southern Florida, you're telling me that that is storage for Mr. Trump?

Epshteyn: Right. Of course, he's doing a good thing for his foundation --

Jackson: He's not displaying it?

Jackson: I would push back on that allegation. Mr. Fahrenthold is a reporter, as you are aware.

Epshteyn: Well, he's not really a reporter, he's pretty much a Clinton surrogate at this point because he has no facts. He alleges things in his writings, but they're always debunked.

Funny thing, though: David Fahrenthold just refuses to learn his lesson, and even questions the idea that hanging a $10,000 painting paid for by charity funds really counts as "storage," since it's, like, on display and stuff. Fahrenthold ran Epshteyn's theory past a tax lawyer, to see if it was a good one:

"It's hard to make an IRS auditor laugh," Brett Kappel, a lawyer who advises nonprofit groups at the Akerman firm, said in an email. "But this would do it."

Experts said that the Internal Revenue Service had actually ruled on a similar issue in 1974, in a case where a major donor to a private foundation took paintings belonging to that foundation and hung them in his home. (The rules against "self-dealing" apply to both major donors and to foundation officers, like Trump.) The IRS determined that this was, indeed, self-dealing — because the homeowner was using the foundation's assets to benefit himself.

In this case: "If [the portrait] were gathering dust in a closet​, and neither Trump nor the businesses were charging for the storage, that would probably be fine," Lloyd Mayer, a professor of tax law at the University of Notre Dame, said in an email.

"The same reasoning [as in the 1974 case] would apply to displaying a private foundation's paintings in a business owned by a foundation insider," Mayer wrote. "So definitely still self-dealing."

So at least Epshteyn's theory brought a smile to the face of a tax attorney, and god knows they don't usually manage to get past the occasional predatory grin.

I'm sorry to bother you, but there's just one thing that doesn't add up...

But darned if the "storage" explanation didn't simply raise more questions for Fahrenthold, who keeps digging into this stuff so doggedly that we may have to buy him an old raincoat and a beat-up old Peugeot convertible. There's just one more thing that bothers Fahrenthold: "If Trump is only storing the $10,000 portrait now, what charitable use does he have in mind for it, eventually?" And, you know, same for the other $20,000 painting, and the $23,0000 Tim Tebow helmet? What's their eventual charitable use? Maybe it's nothing, but he has to ask, you know? And then there's the matter of settling those lawsuits...

David Fahrenthold fans can get another dose of the best reporter digging into TrumpWorld finances Wednesday on NPR's Fresh Air -- check local listings; we'll add a link once the stream's online