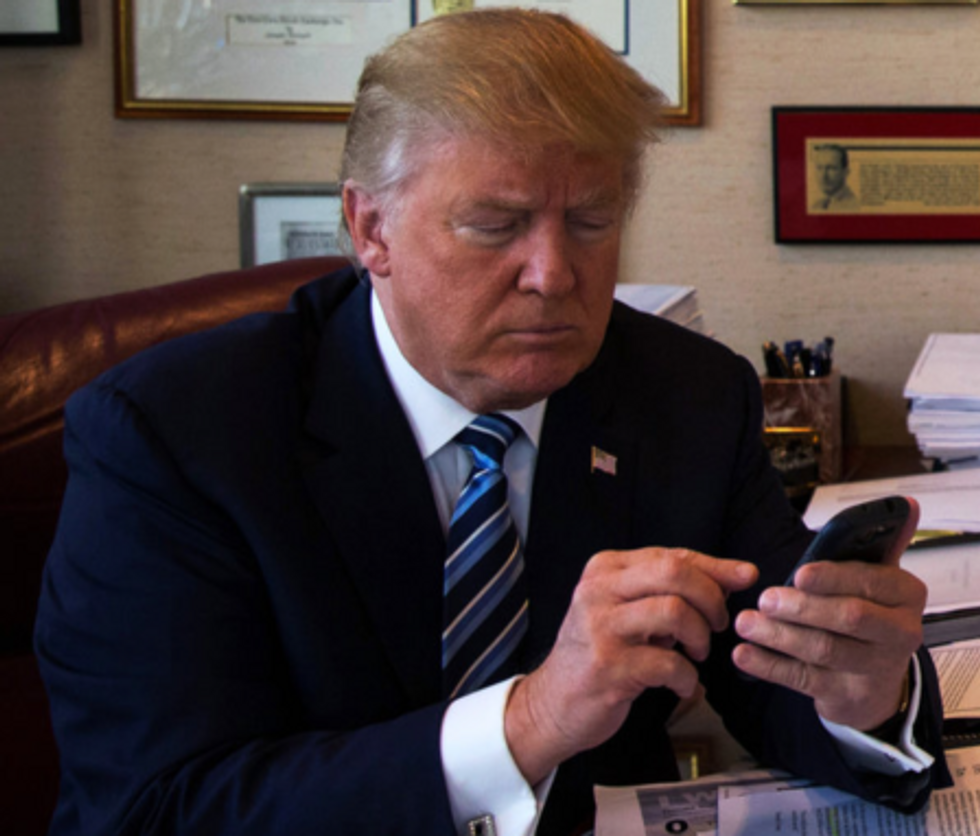 Donald Trump has finally weighed in on that one dickhead in the White House who thinks it's so funny that John McCain is gonna die soon:

The so-called leaks coming out of the White House are a massive over exaggeration put out by the Fake News Media in order to make us look as bad as possible. With that being said, leakers are traitors and cowards, and we will find out who they are!

Haha, just kidding, he is upset about something else ENTIRELY. (And for the record, the White House has not apologized either, because they think apologizing makes them weak, even though the Senate just gets more and more pissed about this.)

Let's see if we can follow the president's bouncing brain here, and figure out how the following things are all true (spoiler they aren't):

1) The Fake News Media makes up leaks to make Trump look bad. There are no leakers.

2) Despite that eternal truth, the leakers are bad. They are BAD, NAUGHTY, FAKE LEAKERS. Also, they, who are part of the Trump White House, are traitors and cowards, like probably even worse than a common Hillary. For "traitor," we are using the definition, "person who reveals something about Trump that makes him look like the idiot he is."

3) He's gonna find those fake leakers, who are the bane of his existence, yet do not exist.

So um, first of all, PRESIDENT JOHN BARRON, are you not the one who does much of the leaking? And when the leakers are not you, aren't they Kellyanne Conway and Sarah Huckabee Sanders, especially considering the way the Beltway media lost its shit very protectively, like they were shielding a source, over Michelle Wolf talking about Smoky Eyes, Full O' Lies, at the White House Correspondents Dinner? AND ALSO, when the leakers say things like "seriously, the only thing he was supposed to do was DO NOT CONGRATULATE VLADIMIR PUTIN, but he did it anyway," can we not surmise that these leakers are the OPPOSITE of traitors and cowards, people who have somehow maintained some sense of love for their country, to the point they want to let the public know just how out of fucking control the president is? We are just curious.

Speaking of Sarah Huckabee Sanders, we wanted to flag this thing from Axios from over the weekend if you missed it, because it made us LOL in public. It is about Sanders throwing a White House meeting to tell the White House how mad she is that the White House leaked that thing about how somebody in there thinks it's pretty LOL that John McCain is gonna die soon.

At yesterday’s meeting of the White House communications team — in the wake of a leak from the prior meeting of a callous remark about John McCain’s brain cancer — a visibly upset and furious Press Secretary Sarah Sanders told the group: “I am sure this conversation is going to leak, too. And that’s just disgusting,” according to a source in the room.

Sanders' prediction came true. What follows below is a leak from that very intense meeting yesterday, according to five sources in the room. The broad outlines of this meeting were first reported by ABC News.

FIVE SOURCES! LOLOLOL! Is that not the most beautiful thing ever?

Keep on leakin', Trump White House! It is literally the only thing you are good at.