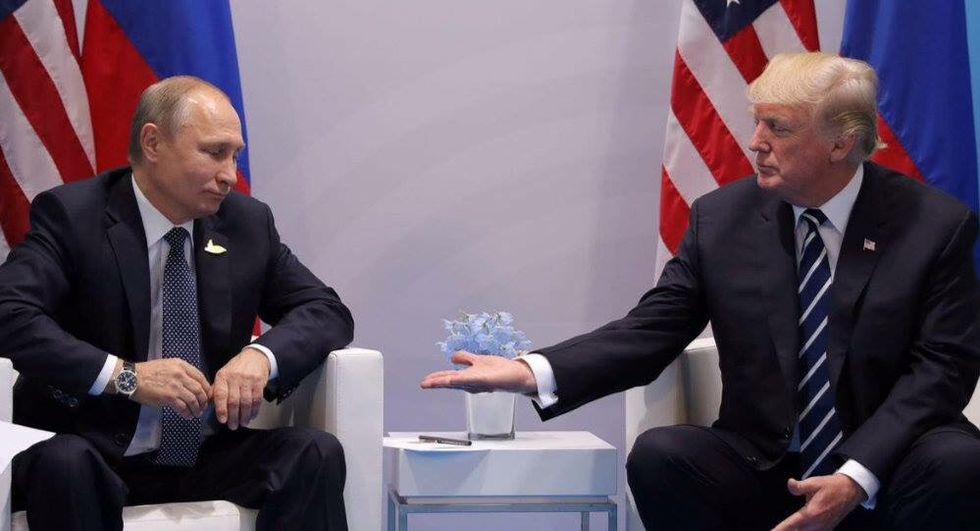 It was embarrassing for all patriotic Americans when Donald Trump went in for his planned half hour meeting with enemy Russian leader Vladimir Putin at the G20 and stayed in there TWO HOURS AND SIXTEEN MINUTES. That must have been exciting for Trump, to be in the same room that long with somebody he thinks likes him. During that meeting Trump pressed Putin "really hard" on whether he meddled in the 2016 election, and when Putin was like "nah," Trump was like "OK," because he is a stupid, stupid man.

But now news has broken that there was a second, undisclosed meeting between the two men that lasted "as long as an hour." It was just Trump, Putin, and a Kremlin translator, but not an American translator, because apparently the available American translator didn't speak Russian. (According to the Washington Post, Trump had been seated next to the wife of Japanese Prime Minister Shinzo Abe, so he had a Japanese-English translator with him. Also, HOW RUDE that Trump just left her hanging so he could go talk to his boyfriend.)

Of course, no translators were necessary, because Putin speaks English. So maybe the Kremlin translator wasn't just a translator, just like the translator at Trump Jr.'s Russian conspiracy meeting may not have been just a translator. Maybe Putin simply wanted to speak Russian in the conversation so he could make fun of Trump to his face, in Russian, without Trump knowing. Maybe the "translator" did some "wire tapps" to Trump while he wasn't paying attention, perhaps because he was focused on concealing the erection he done sprung when Putin started talking.

Let's get Trump's sad rebuttals out of the way so we can focus on reality:

OK, so let's be clear here. They didn't take Putin's translator to the presidential suite at the Hamburg Howard Johnson's and make nookie. (Unless they did and that just hasn't leaked yet.) This happened during a big dinner with all the leaders present. Trump got up from his seat and went over to sit by Putin, so he could fawn all over him we guess. Nobody knows, because nobody could hear the conversation. Maybe Putin was giving him instructions. Maybe he was giving Putin the nuclear codes, or some super top secret classified intelligence from one of America's actual allies, like he did when he met in the Oval Office with Russian Ambassador Sergei Kislyak and Russian Foreign Minister Sergey Lavrov. We just don't know.

As to Trump's claim that the press knew, that's bullshit. As the New York Times notes, the press knew about the dinner, but weren't allowed to go in, and they weren't given a read-out on what happened. So unless the leaky lamestream media is keeping secrets about Trump (unlikely), then this was kept secret. The NYT reports another funny:

"Mr. Trump's traveling press contingent did note ... that his motorcade left the dinner four minutes after Mr. Putin's did."

"OK, OK, Mister Trump! You will leave four minutes after I do, so as not to raise enemy press suspicions! And wipe off your chin!"

Ian Bremmer, president of the Eurasia Group, a consulting firm, broke the news of the meeting, because other people at the dinner told him about it:

“Pretty much everyone at the dinner thought this was really weird, that here is the president of the United States, who clearly wants to display that he has a better relationship personally with President Putin than any of us, or simply doesn’t care,” said Ian Bremmer, president of the Eurasia Group, a New York-based research and consulting firm, who said he had heard directly from attendees. “They were flummoxed, they were confused and they were startled.”

Yeah, because it's kinda fuckin' weird! The NYT also quotes a Russia expert, Steven Pifer, who used to be ambassador to Ukraine, on why this is weird:

“We’re all going to be wondering what was said, and that’s where it’s unfortunate that there was no U.S. interpreter, because there is no independent American account of what happened,” said Steven Pifer, a former ambassador to Ukraine who also specializes in Russia and nuclear arms control. “If I was in the Kremlin, my recommendation to Putin would be, ‘See if you can get this guy alone,’ and that’s what it sounds like he was able to do,” added Mr. Pifer, a senior fellow at the Brookings Institution in Washington.

Sean Spicer has issued a statement about how this is totally normal. We will not reprint it because Sean Spicer is full of shit.

So what really happened in this after-dinner ménage à trois with Putin and his translator pal? WE DON'T KNOW! Again, that's the whole point! The Washington Post says there are three possibilities, which can be boiled down to 1) Trump was discussing evil, unspeakable things with Putin, 2) the meeting was aboveboard but Trump is dumb as fuck and didn't know this would go over poorly, or 3) he doesn't give a damn what you think. Wonkette suggests a fourth possibility, which is that Trump finally grew enough backbone to ask the hottest guy at G20 (in Trump's eyes) to senior prom, and that he promised during the conversation he would put out at least twice.

We'd have to agree. What were we just saying yesterday about how literally everything Trump has done since he was inaugurated looks exactly like he's doing Putin's bidding in exchange for Russia helping him steal the election? It all looks like that.

Wonkette salaries are paid by lovely people like you! If you love us, click below to pay our salaries!