Trump Has Managed To Piss Off *Republicans*, That's How Stupid His Judge Picks Are 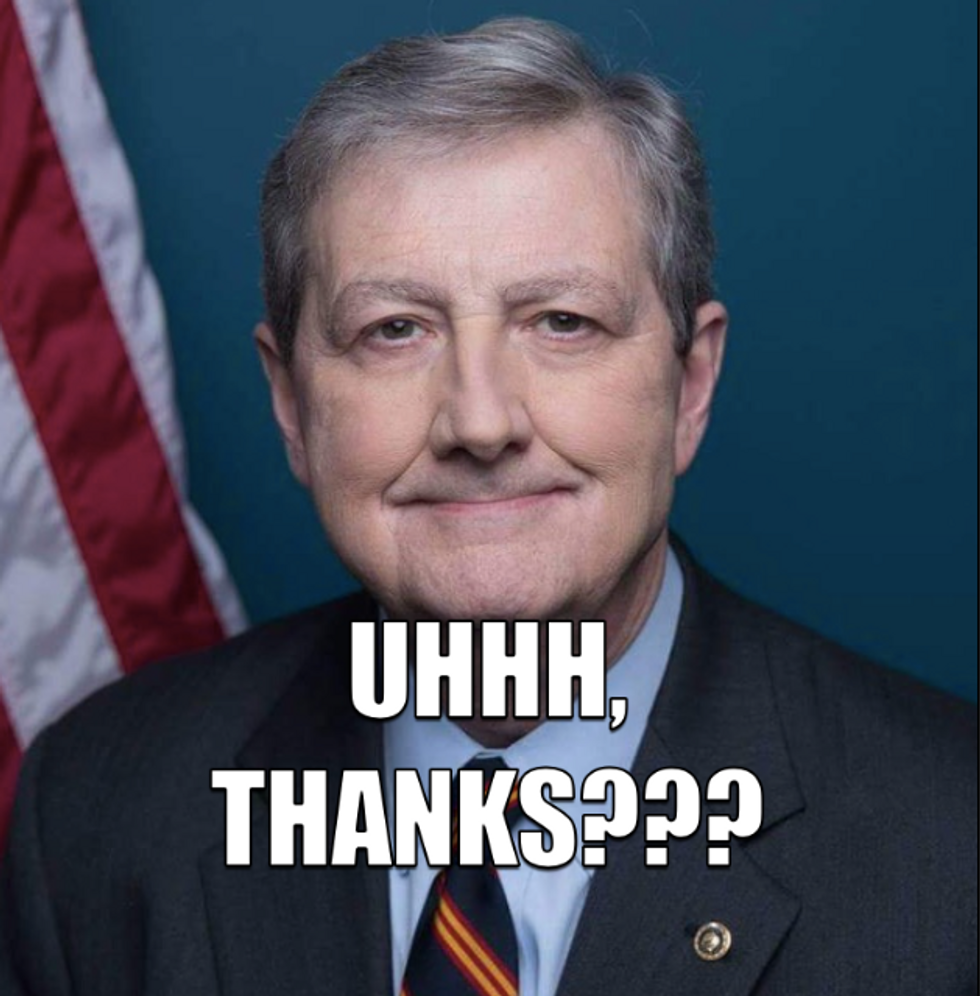 So, how 'bout that judge video, huh! If you have Twitter, you've already seen this.

MUST WATCH: Republican @SenJohnKennedy asks one of @realDonaldTrump’s US District Judge nominees basic questions of law & he can’t answer a single one. Hoo-boy. pic.twitter.com/fphQx2o1rc

Sure Twitter is a sewer, but at least we all got to OMG!!!LOLOLOLOL together last night. Let's paraphrase.

Have you tried a case? NO.

State or federal case? NO.

Ever taken a deposition? NO.

Argued a motion? NO.

Familiar with basic rules of evidence? NO.

What the hell is going on here? Senator John Kennedy, a crazyass conservative Republican from Louisiana who is not usually very smart, just yanked down that poor idiot's pants and SPANKED him in front of the entire country. Along with Rhode Island Democrat Sheldon Whitehouse, who tweeted the video which has now been viewed over 1 million times, Kennedy has ensured that Matthew Spencer Petersen, Trump's nominee for the DC District Court, is unconfirmable. This comes two days after Chairman of the Judiciary Committee Chuck Grassley forced the White House to withdraw the nominations of Brett "Ghost Hunter" Talley and Jeff "Don't Look at My Browser History" Mateer. This is not normal.

By way of explanation, we offer you two words.

We have mentioned once or twice that we think the White House Counsel is not beaten with the brilliant stick. And in the mode of all Trump strumpets, he gives no shits about girly stuff like competence or DC norms. Traditionally, senators play a big role in selecting judges from their own states. McGahn managed to get crosswise with Senator Kennedy last month when he called him up and informed him that Louisiana native Kevin Duncan would be the new nominee to the 5th Circuit Court of Appeals. Louisiana's The Advocate reports,

“I first learned about Mr. Duncan’s nomination when I received a phone call — actually a series of phone calls — from Mr. Don McGahn,” Kennedy said. “Mr. McGahn was very firm that Mr. Duncan would be the nominee — to the point that he was on the scarce side, in one conversation, of being polite.”

McGahn later apologized for being rude, Kennedy said, but didn’t relent on his insistence that Duncan — considered a rising legal star among many on the religious right — would fill the seat.

Kennedy had no problem with putting a wingnut on the bench -- he's not some loon who wants to get rid of the patronage system, heaven forbid! He just wants it to be HIS wingnut, not some guy who spent most of his career in DC. Via The Advocate,

"'So how come you’re picking a Washington lawyer — what am I, chopped liver?'" Kennedy said Louisianans have asked him. "And I’ve got to be able to answer that from those people."

Whatever his motives, Kennedy is clearly pissed off at the White House. He vowed he'd vote against Talley, "in a heartbeat — and twice if I could." The Senator was incensed that McGahn put forward a guy whose only qualification is that he's married to McGahn's chief of staff Ann Donaldson. Talley failing to disclose it on his conflict forms was just the icing on the cake.

Sure it's a patronage system, but McGahn has abused the privilege.

Chuck Grassley is trying to pack the courts with anti-choice loons on the down low. He and that sanctimonious prick Ben Sasse have been whining that the liberal ABA is sliming Trump's nominees, who are white men of surpassing integrity and intellect. FOR SHAME! Then McGahn goes and nominates his old FEC buddy to be a trial judge, despite the guy having zero trial experience. On top of which, he tells a senator on the Judiciary Committee to get fucked.

Kennedy said he'd tried to raise these concerns with McGahn, the White House counsel, whose office handles potential nominees for the federal bench. But the senator said those conversations haven't been productive.

Have we mentioned that Don McGahn is stunningly, hilariously incompetent?

Meanwhile, Democrats like Sheldon Whitehouse are using social media to summon the #RESISTANCE (that's YOU, Wonkers) to scream bloody murder about these shitty nominees. And just like you sank Obamacare repeal and the Alabama kid-toucher, you're making it much harder for them to push these terrible judges through.

So, well done Wonkers! It is NICETIMES. Stay woke!

Please click here to fund us! The Tweeter machine is promising to Friday News Dump us, and we need to stock up on Cheetos and No-Doz!