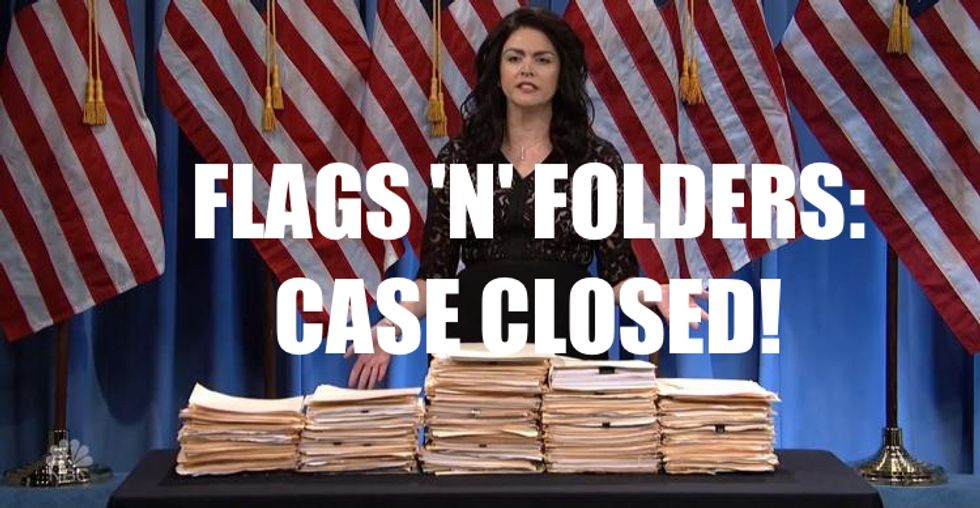 Remember when Donald Trump screamed for a hundred consecutive months about how corrupt the Clintons were for getting the Saudis to donate bed nets to kids dying of malaria in Africa? Wasn't 2016 THE BEST!

But then Donald Trump grabbed the electoral college by the pussy, and people noticed that the Trump Organization was not a global chain of homeless shelters and free clinics. It's actually a bunch of trash palaces where rich people go to put money into Donald Trump's pocket! Weird!

Democrats started screaming bloody murder about payments from foreign governments violating the Foreign Emoluments Clause of the Constitution. CREW filed a lawsuit. And even the Republicans were like, "Mr. President Sir, if you don't mind, maybe you can make some token gesture toward ethical propriety when Hannity cuts to commercial next time?"

So Trump scheduled a press conference on January 11 with everyone's favorite lawyer Sheri Dillon. They stood in front of a giant stack of manila folders and arglebargled some lies about Trump being an ethical paragon who was doing so much more than the law requires to get rid of his conflicts of interest.

Emoluments comes from the Constitution. The Constitution says “officials may not accept gifts, titles of nobility, or emoluments from foreign governments with respect to their office, and that no benefit should be derived by holding in office.”

The so-called Emoluments Clause has never been interpreted, however, to apply to fair value exchanges that have absolutely nothing to do with an office holder.

Neat trick, there, Sheri! No president has ever accepted millions of dollars a year from foreign governments, so EUREKA! no one has ever called it a violation of the Emoluments Clause! A+ lawyering!

Then she made some more lies about how it would be totally unethical for Trump to divest from his business, how DJ and Eric were going to hold all daddy's money and never talk to him about it no more, and how they were going to name a compliance officer at the business to make sure everything was above-board. (They gave longtime Trump executive George Sorial a nifty new title as Chief Compliance Officer, so promise kept!)

Plus, Poppy Trump was so superduper committed to doing the right thing, he was going to fall on his sword and donate his profits from Not Americans to the United States Government. #MAGA!

President-elect Trump has decided, and we are announcing today, that he is going to voluntarily donate all profits from foreign government payments made to his hotel to the United States Treasury. This way, it is the American people who will profit.

Everyone's favorite bureaucrat Walter Shaub was NOT FUCKING HAVING IT. That same day he held a press conference to point out that Rex Tillerson had managed to divest himself without violating all the ethics laws, so Sheri Dillon should maybe STFU right now please.

I was especially troubled by the statement that the incoming administration is going to demand that OGE approve a diversified portfolio of assets. No one has ever talked to us about that idea, and there’s no legal mechanism to do that. Instead, Congress set up OGE’s blind trust program under the Ethics in Government Act. Under that law anyone who wants a blind trust has to work with OGE from the start, but OGE has been left out of this process. We would have told them that this arrangement fails to meet the statutory requirements.

The President-elect’s attorney justified the decision not to use a blind trust by saying that you can’t put operating businesses in a blind trust. She’s right about that. That’s why the decision to set up this strange new kind of trust is so perplexing. The attorney also said she feared the public might question the legitimacy of the sale price if he divested his assets. I wish she had spoken with those of us in the government who do this for a living. We would have reassured her that Presidential nominees in every administration agree to sell illiquid assets all the time.

But that was January, and this is Planet Earth. No money has been turned over to the Treasury yet. But after Jason Chaffetz leaned on them, the Trump Organization did produce a glossy brochure for Congress.

Case closed! This brochure is in color. They probably sent it via certified mail.

To fully and completely identify all patronage at our Properties by customer type is impractical in the service industry and putting forth a policy that requires all guests to identify themselves would impede upon personal privacy and diminish the guest experience of our brand. [...]

To attempt to individually track and distinctly attribute certain business-related costs as specifically identifiable to a certain customer group is not practical, nor would it even be possible without an inordinate amount of time, resources and specialists, which would still be subject to some measure of estimation and cost allocation methodology.

Then Elijah Cummings had a rage stroke.

Unfortunately, your meager response does not include the vast majority of documents we requested in our letter. Instead, you provided only a single document -- a glossy, eight-page pamphlet that contains a total of 40 sentences -- and an email forwarding this pamphlet to various Trump organization entities. This pamphlet raises grave concerns about the President's refusal to comply with the Constitution merely because he believes it is "impractical" and could "diminish the guest experience of our brand."

Complying with the United States Constitution is not an optional exercise, but a requirement for serving as our nation's President. If President Trump believes that identifying all of the prohibited foreign emoluments he is receiving would be too challenging or would harm his business ventures, then his options are to divest his ownership or submit a proposal to Congress to ask for our consent.

He also pointed out that maybe all those Eastern European gangsters Trump likes to hang out with are smart enough not to call up Trump hotels and say, "Hello, this is Mr. Autocrat. Please charge this stay to Kleptocristan's account."

So, what now? Jason Chaffetz's letter to Sheri Dillon was very GRRRR, WE MEAN BUSINESS.

The Committee on Business and Government Reform is the principal oversight committee of the House of Representatives and may at "any time" investigate "any matter" as set forth in House Rule X.

Wonkette takes all the foreign moneys, but only from READERS LIKE YOU! Give it please!