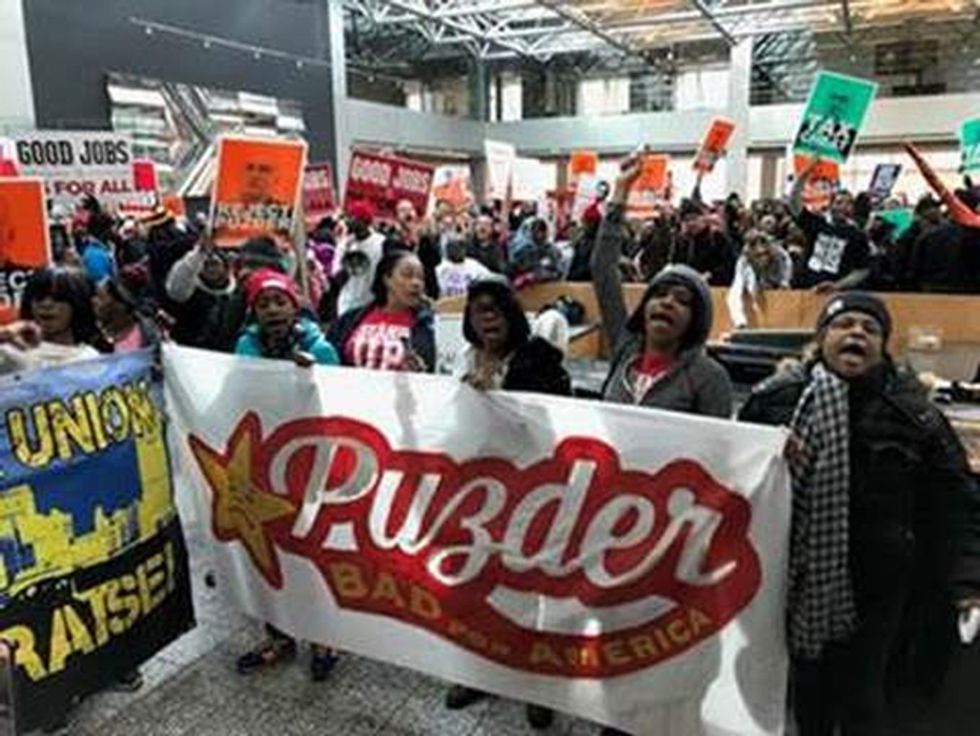 Looks like Donald Trump's awful nominee for Labor secretary, Carl's Junior/Hardee's CEO Andrew Puzder, just might turn out to be too awful even for Republicans to confirm. CNN reported Tuesday that four Republican senators -- Susan Collins of Maine, Lisa Murkowski of Alaska, Tim Scott of South Carolina and Johnny Isakson of Georgia -- have told Senate Majority Leader Mitch McConnell they aren't able to support Puzder, thanks to the sort of things that would normally have already forced other cabinet nominees to withdraw -- not just his former wife's allegations, during their divorce, of spousal abuse (which she has since retracted), but also Puzder's own admission that he had employed an undocumented immigrant as a housekeeper, and not paid payroll taxes for her, either. Now, after multiple delays, the Labor Secretary Nobody Liked is up for hearings set for Thursday.

So now Mitch McConnell is lobbying the troublemaking senators to get back in line, hoping that at least two will come back to the Republican nickel-and-dime so Vice President Mike Pence can make history -- again! -- by being the only veep whose vote was necessary to confirm a second cabinet member, after he was historically summoned to break the tie on horrible Betsy DeVos for Secretary of Education. CNN notes that Murkowski and Collins were also the only two Republicans to vote against DeVos, and that they're considered less likely to be forced to start singing on-key from the GOP hymnal than Scott and Isakson.

McConnell doesn't want to be the guy who tells Donald Trump the nomination needs to be withdrawn due to lack of support, so he's expected to go all MitchNuts on the wayward senators:

But the sources involved in the urgent lobbying effort, speaking to CNN on condition of anonymity, said the leader viewed this as a test of party unity and his leadership, and was determined to round up the necessary votes.

To that, several business organizations with political clout have joined the effort, including the Chamber of Commerce, which sent lawmakers a letter supporting the Puzder nomination last week and has been working in concert with Senate GOP leadership to sway the senators who have reported their opposition or likely opposition to Puzder.

If you're a Wonker in Maine, Alaska, South Carolina, or Georgia, first off, you have our deepest sympathies, and second, you need to get on the phone and tell those senators this would be a great chance for them to demonstrate their independence and political courage and stuff. Hell, regardless of where you live, get on the phone and call your senators' local offices and let them know Puzder's unacceptable. The Democrats need our support and the Republicans need to know we're out here.

Also worth mentioning: Puzder's perfectly horrible record on labor rights, which has been the focus of labor groups like the pro-minimum wage increase organization Fight for $15, which coordinated protests Monday against Puzder at the headquarters of parent company CKE in Anaheim and of Hardee's in Saint Louis, as well as at other Carl's/Hardee's locations around the country. Carl's and Hardee's employees have accused the chain's management of tolerating sexual harassment, and of violating any number of labor rules, like withholding overtime pay, forcing them to take unpaid breaks, and cutting hours of workers who they suspected of involvement in union organizing:

A Los Angeles worker, Ivan Nava, said that when his manager "found out that I had started organizing for the Fight for $15, she cut my hours from six to eight hours a day down to as little as four hours a day, and started scheduling my shifts when she knew I had college classes." He filed a claim accusing the franchise of "implicitly threatening Ivan Nava with retaliation for engaging in union activity."

They seem nice! Puzder's defenders insist these are problems only with the franchise owners, and should not be considered a problem for him, not that Republicans do; the opposition seems to have more to do with that undocumented housekeeper than with Puzder's crappy workplaces. Nonetheless, Fight for $15 notes that

Puzder’s restaurants have a long and troubled history of worker abuse. In 60 percent of Department of Labor investigations since 2009, CKE restaurants and franchises were found to have violated wage and hour laws. Since Puzder became CEO of CKE in 2000, the Occupational Safety and Health Administration, which falls under the DOL, has found 98 safety violations at Carl’s Jr. and Hardee’s locations, with 36 of them capable of causing death or grave physical harm. Capital & Main reported that, under Puzder’s tenure as CEO, Carl’s Jr. and Hardee’s have been hit with more federal employment discrimination lawsuits than any other major U.S. hamburger chain.

Just so you know, even if his nomination is ultimately stopped by the untaxed undocumented employee -- this guy's bad news, and we'll be glad to see him gone. CNN Congressional reporter Manu Raju reports the effort to get two of the renegade Republicans to change their minds appears to have failed, and there may even have been more defections:

Top Senate Republicans have urged the White House to withdraw the Andrew Puzder nomination for labor secretary, a senior GOP source said, adding there are four firm Republican no votes and possibly up to 12.

Here's hoping that opposition holds up -- get to your phones, kids. Not that anyone Trump appoints to Labor would be a friend of workers, but it seems difficult to imagine too many candidates who'd be worse.

UPDATE: It's official: Puzder has withdrawn from consideration as Labor Secretary, and will now have to be content with making the lives of fast-food workers a living hell. But not everyone else with a job. One Republican senator said that 12 Republicans "at a minimum" were withholding their support for Puzder. It's unclear who Trump's next pick for the post will be; it's not yet clear whether anyone has informed the president that the awful boss in Office Space is a fictional character.

Didja notice Wonkette is ad-free now? We bet you did! We pay a living wage at this little mommyblog, so please help us with that!