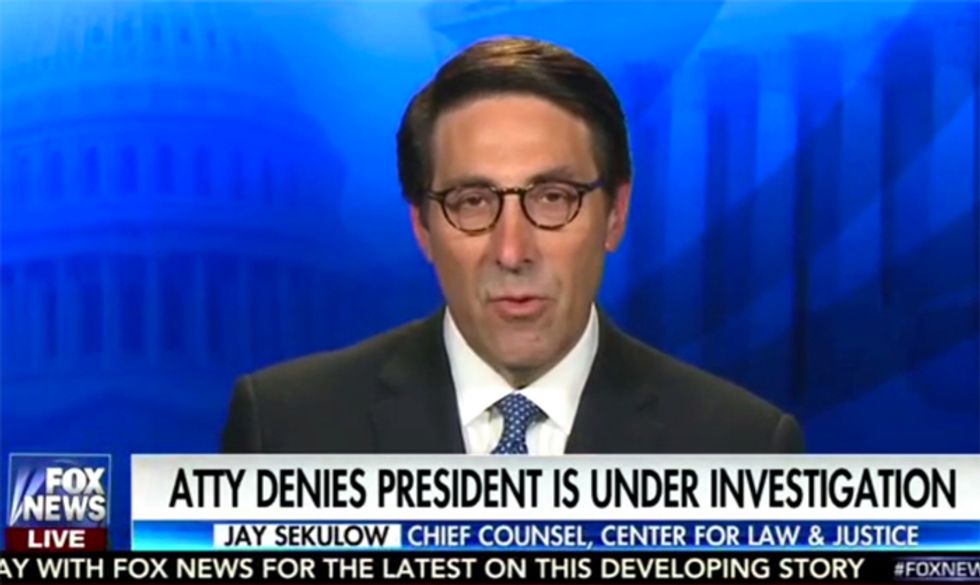 He just wants to be kind to the Sekulows. He's a Sekulow Humanist.

When Donald Trump hired rightwing Christianist lawyer Jay Sekulow to be part of the legal team attempting to defend him in the Russia-and-everything-else investigation, heads were scratched and eyebrows were raised: Bad enough that Trump already had one idiot lawyer who knew nothing about doing law in Washington DC, but why would he add another idiot lawyer, Jay Sekulow, whose usual schtick involves going to court in culture-war issues, like a school not saying the Pledge of Allegiance right, or a town not being allowed to fly the Christian Flag (yes, there is one) at the police station. Well! Maybe President Grifty simply recognized a kindred soul, since, as the Guardian demonstrates in an investigative piece by Jon Swaine, Jay Sekulow has been awfully good at making sure money from the nonprofits he runs makes it into the bank accounts of members of the Sekulow family, to the tune of some $40 million over the years.

Sekulow runs a couple of nonprofits, the American Center for Law and Justice, which positions itself as a sort of anti-ACLU, defending the rights of oppressed Christians in America (which is all of them) against the nasty forces of secularism, and "Christian Advocates Serving Evangelism" (CASE) which also raises money to protect Christians from sharia law and Barack Obama taking their guns and also from Barack Obama instituting sharia law. The whole arrangement looks sketchy as anything, and the details are loads of fun, like how Sekulow, his wife, his brother, and his kids all get paid millions of dollars for the important work they do for CASE and the ACLJ. And just like Donald Trump, Sekulow is an expert at keeping money in the family business -- money from the charities is used to buy services from Sekulow's law firm, from the production company that puts his radio show together, and so on. And the great thing, says Sekulow in his pitches, is that he provides all that free legal service to good Christians being oppressed:

Sekulow has assured supporters that his organization “does not charge” for its services. “We are dependent on God and the resources He provides through the gifts of people who share our vision,” he wrote in a letter sent to contributors.

He can probably afford the "free" legal work, since his nonprofits send all sorts of money his family's way:

Sekulow’s brother, Gary, the chief operating officer of the nonprofits, has been paid $9.2m in salary and benefits by them since 2000. Gary Sekulow has stated in Internal Revenue Service (IRS) filings that he works 40 hours per week – the equivalent of a full-time job – for each of the nonprofits [...]

[A] company run by Gary’s wife, Kim Sekulow, has received $6.2m since 2000 in fees for media production services and for the lease of a private jet, which it owned jointly with Jay Sekulow’s company Regency Productions. The jet was made available for the use of Jay and Pam Sekulow, according to corporate filings.

And then there's the high-pressure fundraising script, circa 2009 and the Great Recession, that the Guardian obtained, in which the caller is walked through the options for dealing with people who say they're too broke or unemployed to help Jesus buy the jet He needs for Jay Sekulow to travel in comfort:

Yes, the anti-Christian forces are rallying, and the ACLJ needs your "sacrificial gift" of just $20 to help buy that jet, and if you don't sacrifice, then Obamacare might force your child's middle school to refer little girls to abortion clinics (yes, that was in a real script from 2013).

Now, there are IRS regulations that are supposed to prevent nonprofits from paying their organizers “excess benefit” that exceeds the fair market value of their services, and several experts on nonprofit funding and law said Sekulow's groups sure looked fishy to them. But let's be fair, and note that a spokesperson for Sekulow contacted the Guardian to say that the groups have been routinely audited and found to be on the up and up, and the IRS has also "previously conducted audits of the ACLJ and Case and found them to be in full compliance of all applicable tax laws," so everything's fine.

Which sort of makes you wonder, if the groups are so clean, why Guardian reporter Jon Swaine would have learned this tidbit after his story was published:

Will you look at that -- the fake media is even getting law enforcement to do its bidding in these witch hunts. We bet Sekulow's nonprofits have an emergency fundraiser in the works already.

Yr Wonkette is supported by reader donations. Please click the "Donate" linky, and we promise not to buy a jet. Not even a prop plane!