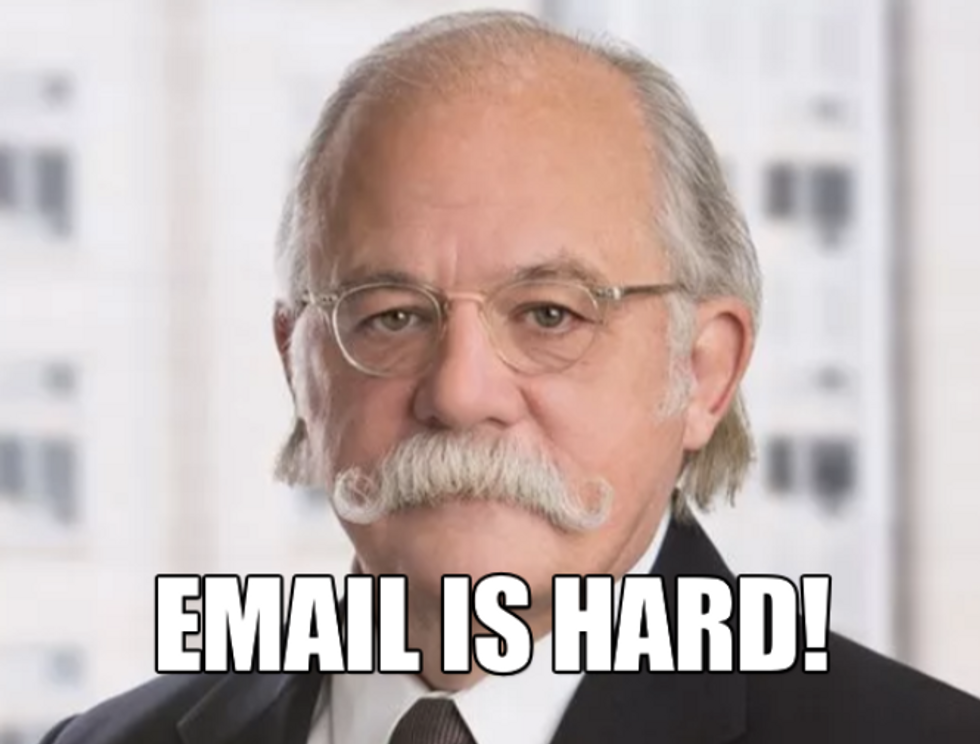 Here's a #HOTTAKE, Wonkers! When a stranger sends you an email that says,

DO NOT ANSWER. No, not even if he baits you with,

Nothing good will come of engaging with randos online. And that goes doubly if you happen to be employed at the White House as the president's lawyer.

What is it about representing Donald Trump that causes attorneys to lose their damn minds? Trump's attorney Ty Cobb was a respected partner at Hogan Lovells for years. Before that, he was a federal prosecutor. After only six weeks at the White House, the guy is emailing a reporter at 1:30 in the morning to ask, "Are you on drugs?"

(To be clear, Business Insider's Natasha Bertrand wasn't asking about Trump's balls. She'd simply reported on the White House decision to fire James Comey in a way that pissed Ty Cobb off.)

In which the president's lawyer writes me at 1:30 am on a Saturday and asks me if I'm on drugs. pic.twitter.com/SPGTkMylM5

After Business Insider published the email, Cobb twirled his mustache for an hour and announced, "Henceforth, I will refrain from dashing off confrontational emails in the middle of the night when I am in my cups! I will exercise good judgment to represent my client's best interests and bring no further shame on the legal profession."

How are you sleeping at night? You’re a monster.

And instead of hitting the delete button, he responded,

In fancy lawtalk, we might jokingly call that an invitation to make an offer. Because Cobb's interlocutor, Jeff Jetton, was just looking for an in. He probably assumed that an actual officer of the court would know better than to respond. But once Cobb opened the door, Jetton was off to the races.

Like a human baby or a baby monster? I envy you, with your ability to catch a good night’s zzzs. Despite all of the havoc you and your ilk are causing.

Then it descended into a discussion of Donald Trump's saggy, orange junk.

At what point will you stop fondling the Don's balls and say no, out of curiosity?

Right about then is when most lawyers would stop answering, for the love of God! But Ty Cobb is a maverick, we guess? He decided instead to delve into the details of his own personal finances. Because why the hell not?

Dude U have no idea! I walked away from $4 million annually to do this, had to sell my entire retirement account for major capital losses and lost a shitload to try to protect the third pillar of democracy. Your hate I will never understand as an American. Hope you get help!

But then a weird thing happened. The men actually had a civil, substantive conversation about why Cobb agreed to represent Trump.

Can say assertively the more adults in the room will be better. Me and Kelly among others. Over and out

As a lawyer, this was actually worse than talking about Trump's balls. Because lawyers are not supposed to describe their clients as if they're unstable children who have to be managed for the good of the country. Even if it's true!

But Jetton saw his shot, and he took it.

We at Wonkette have been wondering the same thing! If only we'd known that we could find out just by spamming the White House lawyers with messages about Donald Trump's nasties! Cobb replied,

Three pillars of govt. All deserve a defense. Particularly with phony allegations and fake news. I am on't be here for long but will be I my piece against bullshit Russian bullshit that hurts us now and is totally political limiting Russian cooperation against NK. This shit is real and real time. Got to go: Best, Ty

IDEA: Maybe get rid of the open bar at the White House and bring back spellcheck as the default email setting? It's just a thought.

Business Insider broke the story after Jetton turned the emails over to reporter Natasha Bertrand, who is not on drugs. He also gave copies to Slate and Mother Jones, which published Cobb's response.

I was trying to turn someone who appeared angry into a friend. And privately. My bad. This was what I believed to be a private conversation. There are many pros and talented people in the White House. I am proud to be there. It was not for public consumption but it appears I was catfished.

Okay, fella. We're gonna let you slide on the meaning of catfishing, just as a senior citizen discount. But you are a goddamn lawyer! You thought you were having a confidential exchange with some nutjob you met online? And now you're "disappointed" that people are reporting on it?

Just as Mr. Cobb feels obligated by some warped sense of duty to the three pillars of government to add rocket fuel to Tump’s bastardized version of democracy, it’s our duty as citizen to speak up and voice our displeasure at every chance we get. I have done nothing wrong. Make no bones about it, if you are standing besides these monsters you are one of them. I do not care if you donated money to charity or registered as a Democrat, if you throw your principals away to board the train, you’re one of them…I do not feel sorry for Cobb and the capital losses on his retirement accounts. He’s made his bed and he can sleep it. And he seems to do so quite comfortably.

Wonkette will never send you spam emails about Donald Trump's testicles. If you give us money, we promise to send a nice thank you note with no icky swears. Unless that's your thing, in which case, CAN DO!