Trump Letting Mystery Businessmen Tell Him How To Run America, Like God Intended 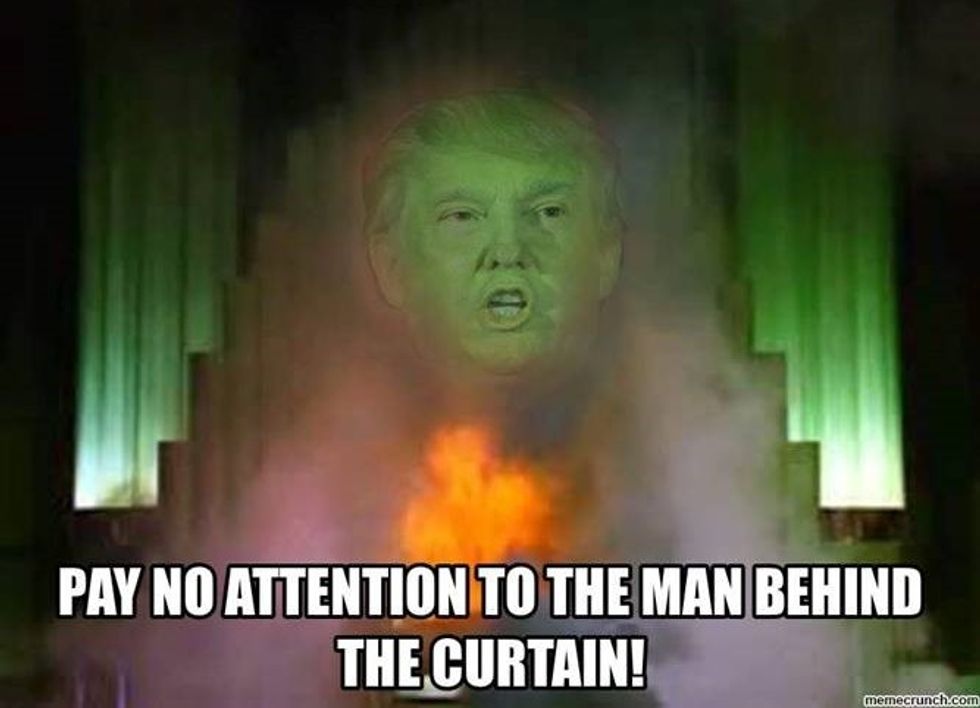 Oh, Kris Kobach is here? I guess we ARE in Kansas, Toto!

The outsourcing of American policy to industry groups isn't really anything new. Since Ronald Reagan, Republicans have been happy to let lobbyists help write legislation, because they've obviously got the good of the nation in mind. But the Trump administration is taking things to a whole new level: Not only is it asking for help from business interests to shape policy, because Donald Trump has no actual ideas of his own, but the advisory groups telling Trump what policies he should adopt are refusing to abide by federal disclosure and open meetings laws, according to an a report by McClatchy. Really, is it any of your damn business who's making policy, as long as it's great policy that's making America great again?

In a growing number of cases, the administration has been accused of violating a federal requirement that these advisory groups – working on everything from jobs training to environmental policy – open their meetings, release their documents and announce their members’ names. Three lawsuits have been filed in recent weeks accusing the administration of failing to disclose information about groups charged with investigating voter fraud and devising a plan to upgrade the nation’s crumbling roads and bridges.

Look, openness and good government are liberal obsessions that might get in the way of a really good deal, and Donald Trump promised us excellent deals, just like he promised an Obamacare replacement that would cost less and cover more Americans. Now that that's out of the way, shouldn't we just trust Trump and his corporate pals to come up with policy that's great for America?

McClatchy acknowledges that presidents of both parties have "deployed advisory groups to help develop policy," and have even faced lawsuits over who was on the commissions. But Trump has turned the secrecy dial to eleven, because he's tired of how things have previously worked in Washington, and also because you peons will find out what his policies are when he's good and ready and he feels like tweeting them. Federal law is more of a suggestion to these guys, and if they'd rather not follow it, that's fine, because too much regulation is killing the economy, just like following "laws" is optional for Team Trump:

Trump aides ...state that they do not need to abide by the Federal Advisory Committee Act or that the law doesn’t require as much information to be disclosed as has been in the past. In at least one instance, they said they were following the law — but that they didn’t have to.

“To be sure, the commission has agreed voluntarily to abide by the provisions of FACA,” Department of Justice attorneys wrote July 13 in the administration’s response to a pair of lawsuits filed against Trump about his Presidential Advisory Commission on Election Integrity.

Lucky you, they decided to follow some of the laws. Be glad they're following them at all, will you? We have to admit we admired the progression of ideas in this summary by McClatchy reporter Anita Kumar:

Trump hasn’t made keeping Americans informed a top priority: He won’t reveal who is visiting the White House, he won’t release his tax returns, and he won’t release who he is meeting with or what he’s doing for hours at a time.

The White House also did not respond to requests for comment on this story.

Well of course they wouldn't!

A bunch of stupid "good government" nags like Common Cause and Citizens for Responsibility and Ethics in Washington (CREW) seem to think the government has some kind of obligation to disclose who's giving it advice, which seems really uncivil of them -- why don't they trust the president to put America First? Such busybody groups sound like real elitist butt-inskies, the kind of regulation lovers that are the Reason Trump Got Elected, with all their nosiness:

Critics worry the advisory groups’ secrecy is leaving Americans in the dark about what the federal government is doing and if the people crafting policy will benefit from the proposals. They hope agency inspectors general will launch investigations.

Look, if you don't have a farm that sprays pesticides, and you don't make pesticides, then why should you have any right to ask about the effects of those pesticides on a bunch of farm workers, anyway?

Besides, at least one (1) of the groups advising Trump has fully complied with federal regulations, namely New Jersey Gov. Chris Christie's "advisory group to combat drug addiction and the opioid crisis." That makes it OK for other Trump advisory groups to hide their memberships, not publish the times of their meetings or exclude people (especially enemy journalists) from them. Besides, the law governing such groups is really old, from 1972, and places all sorts of tedious regulations on them:

They are mandated to list meetings in the Federal Register, open meetings to the public, release records, including meeting minutes and information considered by members, even though some argue they can be time-consuming tasks. In addition, their membership is supposed to be balanced.

Hell, if they have to do all that, they may as well not even bother making policy that helps out their industries. So sometimes, they just don't do the disclosure stuff. But darned if the Deep State doesn't keep trying to thwart their efficiency:

Jeff Ruch, executive director of Public Employees for Environmental Responsibility, wants to find out who the EPA appointed to the Superfund task force. Some names have been released by EPA but his group has submitted a public records request for all the names and hopes to hear back by Aug. 24. It plans to file a lawsuit -- which is already written -- if it does not get answers. “Our concern is that agencies of EPA-regulated industry are allowed to write their own rules,” he said.

But if people learn names of corporate leaders who want to make American government more efficient by allowing more pollution, that's just an invitation to Violent Leftists to threaten them. Shouldn't a chemical company CEO be able to call for dumping toxic waste without ending up on some radical environmental hit list?

Similarly, the ACLU has sued to make the president's "Electoral Integrity" commission comply with transparency law, as if that mattered to voters, or at least to the kind of voters Team Trump wants voting. In one decision, a judge ordered the commission to post its documents online, and so the commission did -- just not all of them. In a second decision, the judge held the commission had done plenty already. The two meetings the commission has held have been closed to the public, although the second one was supposed to be livestreamed. Is it Kris Kobach's fault the equipment broke and the livestream failed?

A group called Food & Water Watch has sued the administration for not revealing the membership of the Infrastructure Council, which is full of builders who stand to make a mint from all the contracts that'll be awarded. The lawsuit makes all sorts of ridiculous claims, like saying Donald Trump's advisory commissions are "largely populated by President Trump’s business associates and friends," as if that could possibly be bad:

This practice, in effect outsourcing policy making to private individuals who are unfettered by conflict-of-interest rules and other public accountability standards, raises a host of ethical and transparency concerns.

See? Just more Deep State troublemakers, getting in the way of progress and profits. How is anyone supposed to make a buck with all these busybodies interfering with the smooth transfer of funds from taxpayers to corporations, huh?

Yr Wonkette relies on donations from You, the Reader. Please click the "Donate" linky! We can't guarantee big donors won't be able to influence our editorial policy, though. Name a price and we'll see.