Trump Lied About Calling The Families Of Fallen Troops, And Sarah Huckabee Sanders Blames ... THE TROOPS! 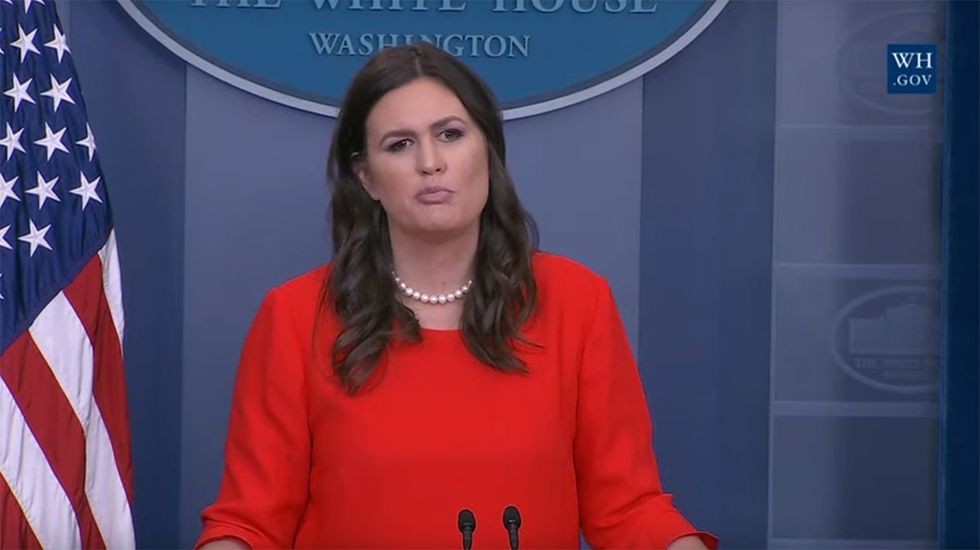 Donald Trump! So maverick! Such outside the box! Other presidents said things that were actually true, because they were low-IQ wusses. But Donald Trump is a REAL MAN. He speaks and then makes it true with his giant, sexy manhands!

On October 17, Donald Trump went on the radiobox with Brian "Rapey Eyes" Kilmeade and said that he'd personally spoken on the phone to the families of every soldier killed in action during his presidency.

[T]o the best of my knowledge, I think I've called every family of somebody that's died and it's the hardest call to make. [...]

Now, sometimes if you had a tragic event with - it's very difficult to be able to do that. But I have called, I believe everybody but certainly I'll use the word virtually everybody where during the last nine months something's happened to us all. I've called virtually everybody.

At which point, the entire White House Press Office shit their pants at once. AGAIN. Because they knew damn well that Trump hadn't even called half the Gold Star families. They'd just spent all of Monday cleaning up after President Logorrhea got realtime fact checked at the podium for claiming Barack Obama never called families of soldiers killed in action. And now they'd have to Make It So, Number Two, while sitting in a puddle of flop sweat and ... number two.

Roll Call broke the story of the scramble in Trumpworld to get a list of soldiers in front of the president so he could shout SORRY FOR YOUR LOSS, KTHXBYE during Hannity's commercial breaks.

Not only had the president not contacted virtually all the families of military personnel killed this year, the White House did not even have an up-to-date list of those who had been killed.

The exchange between the White House and the Defense secretary’s office occurred about 5 p.m. on Oct. 17. The White House asked the Pentagon for information about surviving family members of all servicemembers killed after Trump’s inauguration so that the president could be sure to contact all of them.

And that's how Donald Trump wound up telling the pregnant widow of U.S. Army Sgt. La David Johnson, "he knew what he signed up for … but when it happens, it hurts anyway." Because when you're racing to catch up nine-months-worth of condolence calls, sometimes you just accidentally act like a raging dick. Totally understandable.

And then came the feud with Rep. Frederica Wilson, John Kelly shredding the remainder of his credibility, and the subplot about Trump promising the family of that veteran $25,000 and "forgetting" to send it.All over a period of seventy-two-hours! JFC, we are tired.

And we know that SARAH HUCKABEE SANDERS LYING ABOUT A THING is not actually a real story. News would be Sanders saying, "We apologize for misspeaking," instead of, "How dare you call us out for lying!" But Roll Call reminds us again why this woman pisses us off so much.

On Oct. 18, the day after the president’s aides had sought and received the Gold Star family data from the Pentagon, a reporter at a White House press conference asked Press Secretary Sarah Huckabee Sanders whether Trump had in fact contacted all the families.

Why stop at telling an obvious lie when you can throw some poor bureaucrat under the bus, too? Huckabee Sanders who got her B.A. from a tinyass Baptist College in Arkansas and went on to manage a presidential campaign, which is a thing that only happens when your dad is Mike Huckabee(!!!), is perfectly happy to lie about enlisted guys who have no such nepotistic advantage. It wasn't that Trump was busy golfing and tweeting shit at black football players -- it was those goodfornothing military slackers who couldn't be bothered to follow protocol! Obviously the Commander in Chief isn't allowed to show respect for fallen soldiers unless he gets a memo from some lieutenant in the White House Military Office.

Because when your boss gets caught lying, BLAME THE TROOPS! And then lecture us all on the propriety of calling out a retired general when he tells a blatant lie about a black woman. Have we said FUCK YOU, SARAH lately? Because really, FUCK YOU, SARAH! FUCK YOU!