Trump 'Made In America' Event Uncontaminated By Trump-Branded Crap 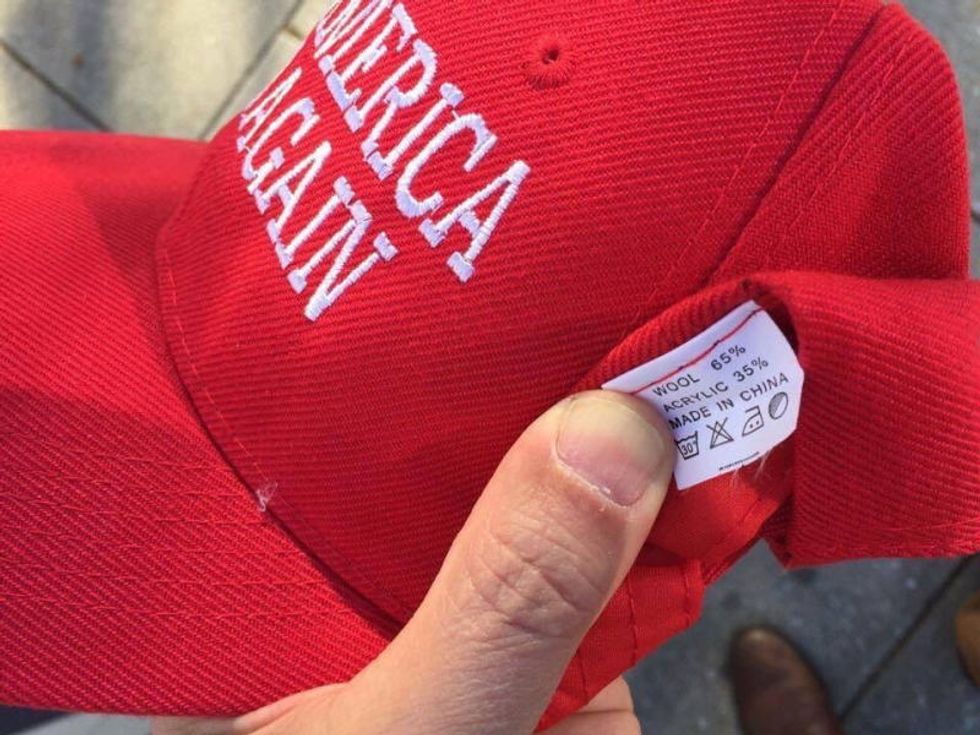 Donald Trump held a fabulous "Made In America" showcase at the White House Monday, with an American Made product from each of the 50 states. The president sat in an American-made fire truck (and probably made siren noises), looked at models of American-made helicopters, played with American-made putters, and pretended he was an American-made Robert DeNiro in The Untouchables:

There were also some American-made assless chaps (as are all chaps) -- ordered at the last minute -- but thank Crom, Trump didn't try them on.

And then there was the speech, which involved Donald Trump getting a big kiss in the name of beef and also telling a bunch of lies:

Say, where was the beef?

[The] gentleman who was in charge of Omaha Beef -- they do beef -- he hugged me, he wanted to kiss me so badly. (Laughter.) Because he said, our business is a whole different business now because you got China approved; the other administrations couldn’t even come close. And I told him, you know how long it took? One sentence. I said, President Xi, we’d love to sell beef back in China again. He said, you can do that. That was the end of that. Right?

The gentleman in charge of Trump Steaks was unavailable for comment, since that venture failed after two months in 2007. As for the China beef capitulation, that was a preliminary agreement, not a one-sentence done deal (because international agreements don't work that way), but for Trump, it was almost truthy!

So of course, Trump had to fix that by telling a lie, then compound it by grumbling that mean fact-checkers fail to believe his lies:

We’ve signed more bills -- and I’m talking about through the legislature -- than any President ever. For a while, Harry Truman had us, and now I think we have everybody, Mike. I better say "think," otherwise they’ll give me a Pinocchio -- (laughter) -- and I don’t like those -- I don’t like Pinocchios.

The Washington Post's fact checker column explained, patiently, as one would to a small petulant child, that Trump wasn't being factual there. He was returning to a claim made when he reached his first 100 days in office, when staffers said Trump had signed more bills in 100 days than any president since Truman. Trump had signed 28, Truman 55. Franklin D. Roosevelt had signed 76. Oh, and "All but one president between 1901 and 1949 had beaten Trump as well."

As the WaPo put it, graciously, we think, "Trump apparently is under the mistaken impression that he’s now ahead of Truman." He isn't. He hasn't even caught up with Truman's 55 bills in 100 days. His record isn't all that great compared to other presidents in six months, either:

Trump has signed 42 bills so far in his first term. According to data compiled by GovTrack, as of July 17, Jimmy Carter had signed 70 bills, George H.W. Bush had signed 55, and Bill Clinton had signed 50. So now Trump is behind three recent presidents, not to mention FDR, Truman and other earlier presidents.

[wonkbar]<a href="http://www.wonkette.com/611247/mmmm-this-coal-water-tastes-like-freedom"></a>[/wonkbar]But Trump has signed three more than Obama's 39 bills in the same time, so he WINS, unless maybe you're talking about the significance of the bills. Has Trump signed anything remotely equal to the very first bill Obama signed, the Lilly Ledbetter Fair Pay Act? Hard to say -- maybe allowing mining companies to pollute streamsis a similar achievement. A whopping 60% of the bills Trump has signed so far have been one page long. Still, that one courthouse named after Fred Thompson was a big achievement.

Trump still had time for another big ol' lie, too, this time about coal mining jobs:

Damn, that's impressive, especially since the Bureau of Labor Statistics (BLS) says there are a total of just under 51,000 coal mining jobs in all of U.S. America, of which 800 have come into existence under Trump. To add insult to fact-checking, NBC News notes that in the last six months of the Obama presidency and its supposed war on coal, the industry added 1,300 jobs.

Trump may have been thinking of a different statistic from the BLS, which says the economy added 41,500 new "mining and logging jobs" between January and June, but while trees are definitely carbon-based, and coal is formed from prehistoric plant matter, you really can't call logging jobs mining jobs. Politifact just won't let you.

Ah, but Trump didn't even mention his greatest achievement when it comes to Made In America: He has to be the first president to aggressively tout the glories of making shit in America while he and his daughter simultaneously make a bundle selling crap with their names on it that's made in other countries. Just about the only Trump paraphernalia actually made in the USA are the official campaign "MAGA" hats, and those are mostly made by people Trump wants to deport. MSNBC simply made the point with a chyron during his speech:

[wonkbar]<a href="http://www.wonkette.com/612383/fashion-icon-kellyanne-conway-cant-stop-pimping-ivanka-trumps-ugly-ass-clothes"></a>[/wonkbar]Asked later about the apparent contradiction of the president celebrating making stuff in America while almost all of his family's branded products are not, and whether the Trump and Ivanka brands would stop making products overseas, White House spokeslump Sean Spicer said, "It's not appropriate for me to stand up here and comment on a business." Oh, yes, heaven forbid a White House spokesperson would ever comment on a Trump brand, unless of course they're pushing it.

Also, too, the Badly Made In America attempt to repeal Obamacare burned to the ground yesterday. Not that Trump playing with trucks (again) had anything to do with that. OR DID IT? (True fact: Some Republicans thought so!)

Yes, the POTUS really did say "Where's the fire? I'll put it out!" as he climbed aboard, according to the White House press pool. Sometimes, the man really is generous, and wants to give everyone the chance to add their own punchlines. And children's books.

Please click the "Donate" linky to support Yr Wonkette, which is made in America (some jokes recycled from Monty Python bits).