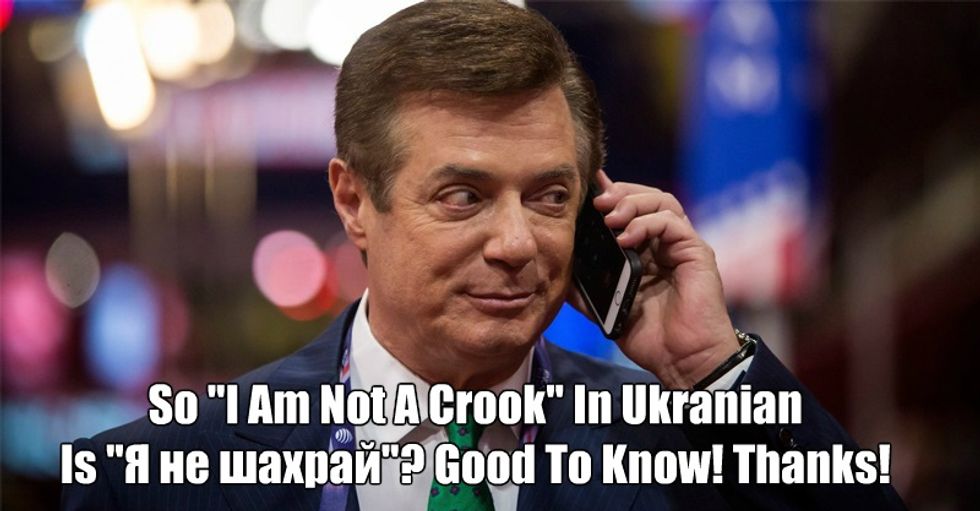 NOTHING TO SEE HERE FOLKS! Just the Ukrainian Parliament killing its own investigation of Paul Manafort so as not to piss off the Trump administration. And ceasing cooperation with the Mueller investigation. And allowing key witnesses to disappear into the arms of mother Russia.

But in an amazing coincidence, Ukraine just got some shiny, new anti-tank missiles from the United States government! So it's all good.

Remember how Paul Manafort ran the 2011 ratfucking campaign for Viktor Yanukovych, Russia's preferred candidate in the Ukrainian elections? After Manafort (and Putin) shoved him over the finish line, Yanukovych threw his opponent Yuliya Timoshenko in jail and denied her medical treatment. And once again, Manafort was there to dummy up a report saying that jailing your political rivals is totes normal, and Ukraine should still be allowed to sit at the cool kids table.

Wait, didn't someone already go to jail over that stupid report?

Oh, hai Alexander van der Zwaan! NOT FAKE NEWS: Even a handsome lawyer with an oligarch father-in-law will wind up in the pokey if he lies to Bob Mueller.

So after van der Zwaan's lawfirm (Skadden, Arps) took $5 million from Manafort to give the Ukrainian government a clean bill of health, Yanukovych proceeded to loot the state coffers. And when he was overthrown in 2014, the new government set about tracking down some of that money. Including some $12-20 million which somehow wound up in Paul Manafort's various accounts.

Robert Mueller is also very interested in those funds, since Manafort and Rick Gates appear to have committed approximately one million money laundering crimes getting them into and out of US banks. However, Donald Trump is not at all interested in anything that would give Mueller greater leverage to flip Paul Manafort and get him to sing like a canary about all the NO COLLUSION that went on during the 2016 campaign.

Did Trump whisper to Ukrainian President Petro Poroshenko that Paul Manafort is a good guy and he hopes the Ukrainians can just let this whole thing go? WE DO NOT KNOW. Perhaps the Ukrainians are just really good at reading body language! Per NYT,

Volodymyr Ariev, a member of Parliament who is an ally of President Petro O. Poroshenko, readily acknowledged that the intention in Kiev was to put investigations into Mr. Manafort’s activities “in the long-term box.”

“In every possible way, we will avoid irritating the top American officials,” Mr. Ariev said in an interview. “We shouldn’t spoil relations with the administration.”

Or maybe when lobbyists for Ukraine Ed Rogers and Haley Barbour stopped by to pick up their checks they said something along the lines of, "Hey, a little birdie named Jeff Sessions mentioned that you might want to ixnay on the vestigationay if you want those tanks, Petro." Haley Barbour is an old-timey swamp Gipper, having served as Mississsippi governor and chair of the RNC. And we're going to let NYMag's Jonathan Chait tell you who Ed Rogers is, since he is getting his Wonkette on today!

In addition to his inability either to present a coherent argument or to write passable prose, Rogers, who somehow has a perch at the Washington Post op-ed page, is also a working lobbyist who brings massive, undisclosed conflicts of interest to virtually every topic he attempts to cover. Rogers has repeatedly argued (or, to put it more accurately, asserted) that Trump has not colluded with the Russian government. I don’t recall any of his columns mentioning the fact that he was lobbying on behalf of the Ukrainian government.

Did Haley and Ed discuss Paul Manafort's business partner in Ukraine, literal actual Russian agent Konstantin Kilimnik, who happened to be under investigation in Ukraine for espionage? Dunno! But now he's gone back to Russia, where he's unavailable to help in the Mueller investigation. Which is a damn shame, since the special counsel had some questions.

Luckily, we all know about those questions, since Trump's amazing legal team leaked them to half of DC. Perhaps Kilimnik could have helped explain how the RNC platform got changed in July of 2016, right after Manafort and Kilimnik had a meeting. Who disappeared the part about arming the Ukrainians to stop Russia from hacking off another chunk of their territory?

And perhaps Kilimnik, who functioned as Manafort's connection to Russian oligarch Oleg Deripaska, might have been able to shed some light on this odd question from Jay Sekulow's leaked list.

What knowledge did you have of any outreach by members or former members of your campaign to Russia offering potential assistance to the campaign? NOTE: specifically mentioned Manafort.

Does Kilimnik know if anything ever came of Manafort's offer to give Deripaska private briefings on the campaign? DUNNO! But if he does, we're never going to find out!

David Sakvarelidze, a former deputy prosecutor general who is now in the political opposition, said he did not believe that the general prosecutor had coordinated with anybody in the United States on the decision to suspend the investigations in Ukraine, or that there had been a quid pro quo for the missile sale.

Ukrainian politicians, he said, concluded on their own that any help prosecuting Mr. Manafort could bring down Mr. Trump’s wrath.

“Can you imagine,” Mr. Sakvarelidze said, “that Trump writes on Twitter, ‘The United States isn’t going to support any corrupt post-Soviet leaders, including in Ukraine.’ That would be the end of him.”

Can you imagine that we'd fall so far, so fast? Other countries are so worried about pissing off our mafioso president that they corrupt their own criminal justice systems to please him. Makes ya proud to be an American, don't it?

Nice Wonkette you got there. Shame if anything were to happen to it! Please click to make sure we live to Wonk another day!