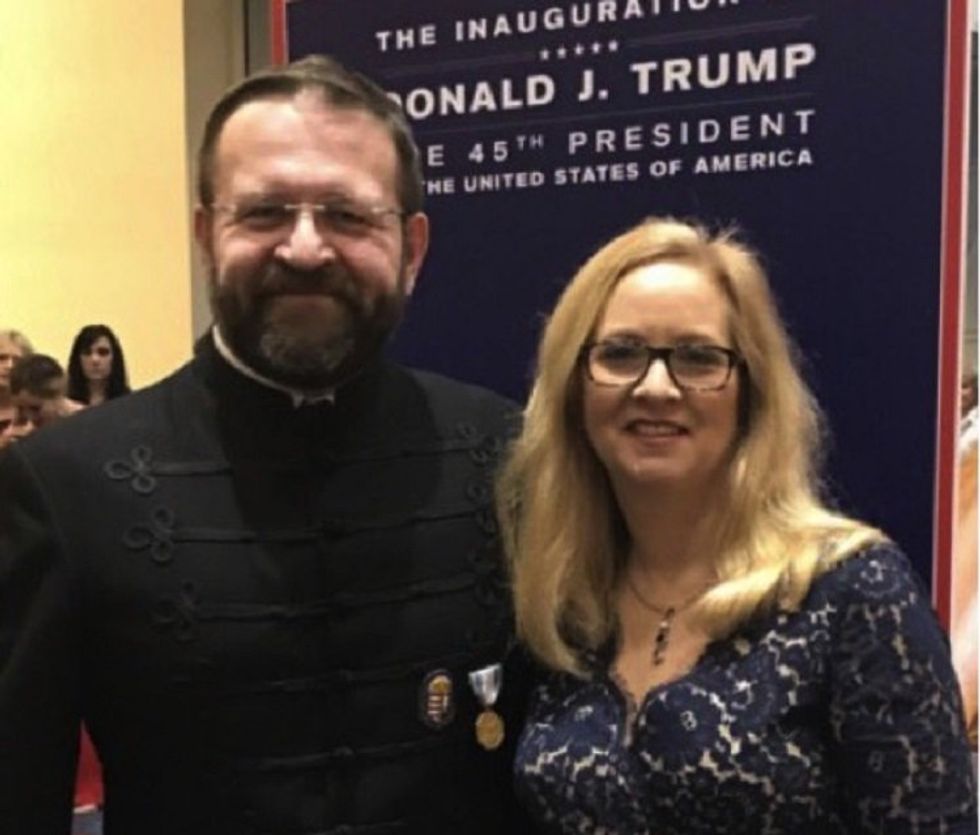 They both seem nice.

Did you know it's possible for you to abandon your godless, sinful Nazi lifestyle? IT'S TRUE! You might not feel like you chose to be this way. After all, you always felt different from the other non-Nazi boys. While they were off romping and rough-housing in the backyard, you were locked in your room reading the copy of Mein Kampf an older Nazi man slipped you when your parents weren't looking, and before you knew it you just couldn't stop spontaneously hating every Jew you saw, and now you've been fired from the Big Lots because your boss saw you carrying a tiki torch in Charlottesville. Is there hope for somebody like you?

Yes! There is literally an ex-Nazi organization called Life After Hate, and it helps neo-Nazis afflicted with irrational hatred see the light and start living as God intended. Now, this might sound a bit like those charlatan "ex-gay" programs, but the one big difference is that YOU WERE NOT FUCKING BORN A NAZI, therefore you definitely can and should change, YOU DICK.

Also? Gays are cool, unlike Nazis, who all need to fuck off.

Would it knock you right off your chair to learn that the Trump administration got rid of all kinds of pesky funding for Life After Hate earlier this summer, and that the effort was led by none other than Katharine Gorka, wife of Trump Nazi adviser Sebastian Gorka?

Weeks before a violent white supremacist rally in Charlottesville, Virginia, led to three deaths and 19 injuries, the Trump administration revoked a grant to Life After Hate, a group that works to de-radicalize neo-Nazis.

The Department of Homeland Security had awarded the group $400,000 as part of its Countering Violent Extremism program in January, just days before former President Barack Obama left office. It was the only group selected for a grant that focused exclusively on fighting white supremacy. But the grant money was not immediately disbursed.

As HuffPost explains, Katharine Gorka was working on killing this funding as far back as the Trump transition. She met the guy at Homeland who ran the Countering Violent Extremism program, George Selim (who has now resigned for some reason), and explained that the only real kind of extremism is the Radical 'Slamic kind, therefore why fund something silly like a program to make Nazis human again? (By the way, right-wing extremists of all sorts are a greater threat to Americans, BY FAR, than ISIS.)

Katharine Gorka is a lot like her husband, who calls her "Katie." They both wrote at Breitbart, home of the "alt-right" neo-Nazi white supremacist movement, and they're both connected to the Hungarian Nazi Vitezi Rend organization. Also too, HuffPost notes that, though they both think they are big important experts on foreign policy stuff, "mainstream national security experts are either unfamiliar with or critical of their work." One difference between them, though, is that we can't find any evidence of Katie Gorka getting a fake PhD from an online Hungarian clown college like her husband Doctor Gorka (do not ever call him that) did.

But they really enjoy hating Muslims together. It is their date night couple thing! You think we're fucking around, but Gorka actually said this in a talk at the David Horowitz Freedom Center just after the 2016 election:

I eat, drink and sleep this stuff. My wife, Katie, is an expert on Jihad as well. Our pillow talk is the Islamic State and  Al-Qaeda.

"Ven an Alpha Male loves a voman very very much, zey take off zeir clothes! And he vhispers sveet nothings in her mouth about radical Islamic terrorism, and zen after zat, he makes intercourse to her, because zee era of zee pajama boy is over, IN HIS PANTS!"

Jesus Christ, these fuckers are weird.

We know we're always shaking you down for donations for Wonkette, but this time, we're going to shake you down for Life After Hate. There's a campaign to recover that $400K in lost funding, because fuck Donald Trump and fuck these Gorka motherfuckers and fuck Nazis. As of this writing, they've raised almost 60K, so go help 'em out. Here's a bit more on what they do, to get you extry motivated:

Life After Hate provides direct service to individuals who want to leave behind their lives of racism and violent extremism. The organization trains and supports former hate group members as mentors and educators who de-radicalize and disengage potential violent extremists. In recent months, the organization has experienced a remarkable increase in phone calls and emails concerning the intensification and spread of hate speech and hate crimes stemming from the alt-right movement in the United States. [...]

Sammy Rangel, executive director of Life After Hate explained, “The funding is for the crisis intervention initiatives that help pull violent extremists out of their lifestyles across the United States. This direct service assists people in resisting violent urges, and provides resources to anyone questioning racist ideologies. Our actions are saving lives.”

We can't imagine how an organization like that might help prevent the next Charlottesville, oh wait yes the fuck we can.

If you need EVEN MORE extry motivation to help out, watch this video of Sebastian Gorka declaring the era of the pajama boy to be over, and when you're done laughing, open your wallet.

Wonkette salaries are fully funded by lovely souls like you! If you love us, click below to pay us those salaries!