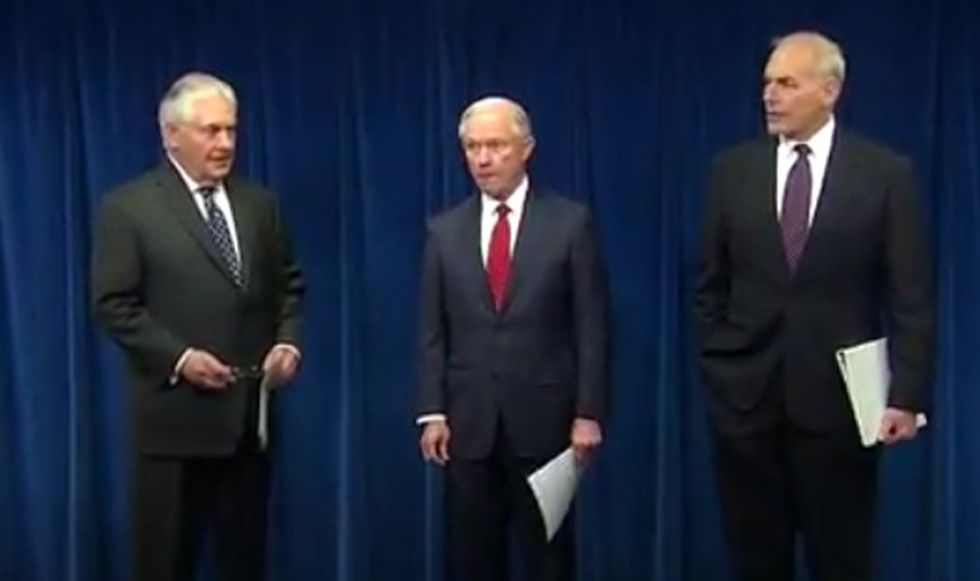 A bit more than a month ago, the Trump Gang proudly unveiled the first version of Trump's definitely-not-a-Muslim ban, which put travel on hold for everyone from seven majority-Muslim countries that lack Trump hotels and also paused all refugee resettlement, with an indefinite stop to refugees from Syria, too. Today, after courts kept saying Travel Ban 1.0 was unconstitutional, Trump sent Secretary of State Rex Tillerson, Attorney General Jeff Sessions, and Homeland Security director John Kelly out to announce Trump has signed Travel Ban 2.0, a new and improved fig leaf the administration hopes will satisfy Trump's Muslim-ban-desiring supporters (it probably will) and stop terrorist threats to the USA (probably won't, any more than it prevents rogue dodo attacks), all without being laughed out of court (Who knows?).

So, what's different in this new, much improved travel ban? It's dropped one country, Iraq, from the list of countries from which travel will be put on hold for 90 days while the Trump administration puts its exciting new "extreme vetting" plan in place. It will also only affect applicants for new visas -- anyone with a green card or a visa granted before the new ban is still eligible to enter the U.S.

As for refugees, the original 120-day pause on all entry of refugees is gone, substituting instead a 120-day pause on Syrian refugees only. The new executive order also scrapped a preference for Christian refugees from Muslim countries, which may help it pass First Amendment muster. And like the first version, this order will reduce the number of refugees allowed into the U.S.from all countries of origin, to 50,000 a year, down from 100,000 a year during the Obama administration. But there's still plenty of anti-Muslim stuff in the new order, like a section calling for keeping tabs on "the number of foreign nationals in the United States who have been radicalized after entry into the United States," and information regarding the number and types of acts of gender-based violence against women, including so-called "honor killings," in the United States by foreign nationals. Violence against women by American citizens is still bad, we assume, but will not get any new attention.

Trump Just Deporting The Fuck Out Of Everyone Now

Home Of The Scared

To prevent a complete fuck-tussle at airports like what occurred when the first order was tossed out on a Friday afternoon with no advance notice, the new order will go into effect in 10 days. This should give Immigration and Customs Enforcement and Customs and Border Patrol time to prepare for enforcing the new rules, or at least to make up matching stories for when they get caught profiling people named Muhammad Ali. The new order also formally revokes the previous version and un-cancelled visas that had been revoked by the State Department under the first try.

Notably, when Trump sent out Tillerson, Sessions, and Kelly to announce Travel Ban 2.0, the president himself didn't put in an appearance like he did the first time, where he signed the thing at the Pentagon in front of replicas of medals for valor, an odd place when you consider the travel ban is based in irrational fear. This time around, Trump signed the order in a Quiet Room, with no press present, possibly because he's busy pouting.

You might think this document weakens the case for the travel ban. But it was a weak case to start with, so why should another report hurt?

So, now everyone's satisfied and this thing's going to keep us all safe, right? You know, apart from how two different leaked Department of Homeland Security reports indicate a travel ban is a dumb idea, because country of origin is a crappy predictor of terrorism, and most foreign-born people in the U.S. who've attempted or committed terrorism became radicalized years after coming here, so "extreme vetting" is likely to be useless.

Then there are the groups who sued the first time around. The ACLU's Immigrant Rights Project plans to sue immediately, according to director Omar Jadwat:

This is a retreat, but let’s be clear — it’s just another run at a Muslim ban [...] At its core, the second order looks very similar to the first, and I expect it will run into the same problems from the courts and the public that the first one did. They can’t un-ring the bell.

Senate Democratic leader Chuck Schumer called the new order a "watered-down ban" that was "mean-spirited and un-American," and the executive director of Amnesty International USA, Margaret Huang, issued a statement saying the new executive order would "cause extreme fear and uncertainty for thousands of families by, once again, putting anti-Muslim hatred into policy." So it's looking like Travel Ban 2.0 may still get tossed, since there's no way to make Rudy Giuliani un-say that stuff about finding a "legal" way to implement a Muslim ban.

Ever the terrible source of fake news, the Failing New York Times points out that in a recent analysis by University of North Carolina professor Charles Kurzman,

Since 2001, 18 of the 36 Muslim extremists who have engaged in attacks inside the United States were born in the United States, while 14 migrated here as children and would not have been stopped by the new vetting process [...]

None came from the banned nations; Muslim extremists have accounted for 16 out of 240,000 murders in the United States since the terrorist attacks of Sept. 11, 2001.

Now that's simply not fair, to compare terrorist attacks by Radical Islamic Terrorists to plain old all-American murders, because terrorism is uniquely awful and makes people a lot deader than being stabbed or shot by a fellow American. Shame on you, Failing New York Times!

Yr Wonkette is brought to you by contributions from ordinary readers just like you, who are getting tired of carrying your freeloading ass. Make a donation, even a small one, to assuage your crippling guilt!