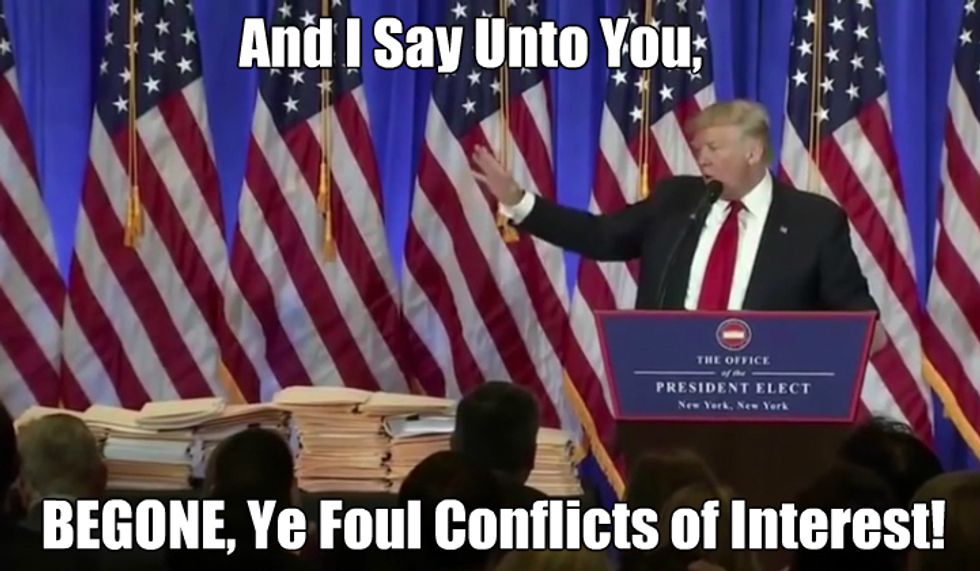 Totally real files. Our top men have looked at them. Top. Men.

At his big news conference Wednesday, Donald Trump explained -- with the help of an attorney, a pile of file folders that may have been completely blank, and the magic of interpretive dance -- exactly how he'll avoid conflicts of interest between his business holdings and his actions as president of the United States of America: Trust him, his sons will run everything and never ever talk to him about business. This was a hugely more detailed plan than his previously announced plan, which was simply "Trust him." Okay, and there were a few other details to make his businesses no longer a problem anymore:

The steps Mr. Trump outlined include turning over to the United States Treasury any profits received at his hotels from foreign government clients. An ethics officer and, separately, a chief compliance counsel will be appointed at the Trump Organization to watch its operations and ensure that it is not receiving special terms, payment or favors as a result of its ties to Mr. Trump, even as the organization is managed by a trust controlled by his two oldest sons and a longtime legal associate.

Well, then, we'd say that's about as insulated from conflict as it's humanly possible to be, except for the steps he didn't want to take because they'd be really inconvenient and cost him money, as Trump Organization lawyer Sheri A. Dillon explained during the part of the presser when we all nodded off and wondered if Trump himself would come back to the lectern. Stuff like selling off his assets or putting them in a truly blind trust run by an independent trustee simply wouldn't work, she explained, because Mr. Trump didn't wanna:

“President Trump can’t unknow he owns Trump Tower, and the press will make sure that any new developments at the Trump Organization are well publicized.”

In addition, she said, the price of a sale of assets would draw scrutiny, and Mr. Trump would still be owed royalties.

Mr. Trump’s representatives also would not release the names of people who stand to benefit from any profits the trust generates, or say whether Mr. Trump would be able to reverse the transaction. On Wednesday, Mr. Trump rebuffed a renewed call to release his tax returns, which presidents have done for decades and which would show how much profit he makes from his business endeavors, including golf courses, marketing deals and commercial office space.

So other than that, Mrs. Lincoln, how did you enjoy the ethics briefing?

Exactly one hero has emerged from the smoking dungheap that is the Trump plan, and that's Walter Shaub, the director of the US Office of Government Ethics, who followed up Trump's bogus press conference with a speech at the Brookings Institution explaining why Trump's plan is no plan at all. We like Mr. Shaub one hell of a lot -- how can you not love a guy who starts off his speech with a line like, "You don’t hear about ethics when things are going well. You’ve been hearing a lot about ethics lately."

Of the "trust" Trump set up with his sons, Shaub said,

I think Politico called this a “half-blind” trust, but it’s not even halfway blind. The only thing this has in common with a blind trust is the label, “trust.” His sons are still running the businesses, and, of course, he knows what he owns. His own attorney said today that he can’t “un-know” that he owns Trump Tower. The same is true of his other holdings. The idea of limiting direct communication about the business is wholly inadequate. That’s not how a blind trust works. There’s not supposed to be any information at all.

Hell, it's barely even a trust that's taken off its reading glasses and has to squint to see the menu. How inadequate is Trump's plan to insulate himself from his business interests while he's president? Let this sink in: Shaub praised the arrangement his office helped hammer out for Trump's nominee for secretary of State, ExxonMobil CEO Rex Tillerson, by contrast, noting that Tillerson was giving up literally millions of dollars in bonuses to set up what Shaub called a "sterling model" of an ethics agreement before entering government. Shaub didn't quite say it, but it was implied: If the CEO of Freaking ExxonMobil can dispose of his financial interests in a way that avoids conflicts of interest, then so can Trump. But Trump doesn't wanna.

Instead, Shaub said, President-elect Trump's "plan" simply "does not comport with the tradition of our Presidents over the past 40 years." Shaub had little sympathy for Dillon's fretting that true divestiture from his business would be asking Trump to sacrifice too much, since every other president in the modern era has "taken the strong medicine of divestiture." As for sacrifice, Shaub had a thought or two on that matter as well:

It’s important to understand that the President is now entering the world of public service. He’s going to be asking his own appointees to make sacrifices. He’s going to be asking our men and women in uniform to risk their lives in conflicts around the world. So, no, I don’t think divestiture is too high a price to pay to be the President of the United States of America.

We'd like to congratulate Mr. Shaub for actually knowing a thing or two about ethics, and for ending his speech by once more offering to help the president-elect to work on a divestiture plan that truly would meet the standards we've expected of every other president since Nixon.

As a reward for his heartfelt defense of ethics in government, Mr. Shaub is now being threatened with an investigation by Utah congressdingo Jason Chaffetz, chair of the House Oversight Committee, who sent Shaub a nastygram Thursday warning him he'd better be careful to avoid "blurring the line between public relations and official ethics guidance." Chaffetz didn't mention Shaub's Brookings Institution speech the day before, but instead a series of tweets Shaub had sent in November urging Trump to divest his business interests. Chaffetz rather unsubtly mentioned that his committee has the authority to reorganize Shaub's nice little Ethics office right out of existence. Be a shame if anything was to happen to it if Shaub were to get too uppity about ethics and stuff. Shaub was instructed to meet with Oversight Committee staff within the month, presumably so they can straighten him out on what ethics mean in the Trump Era. They may or may not have truncheons handy.

That Checks and Balances thing is working out pretty beautifully these days, isn't it?

We'll look on the bright side: At least Chaffetz hasn't yet threatened to prosecute Shaub for Lèse-majesté.