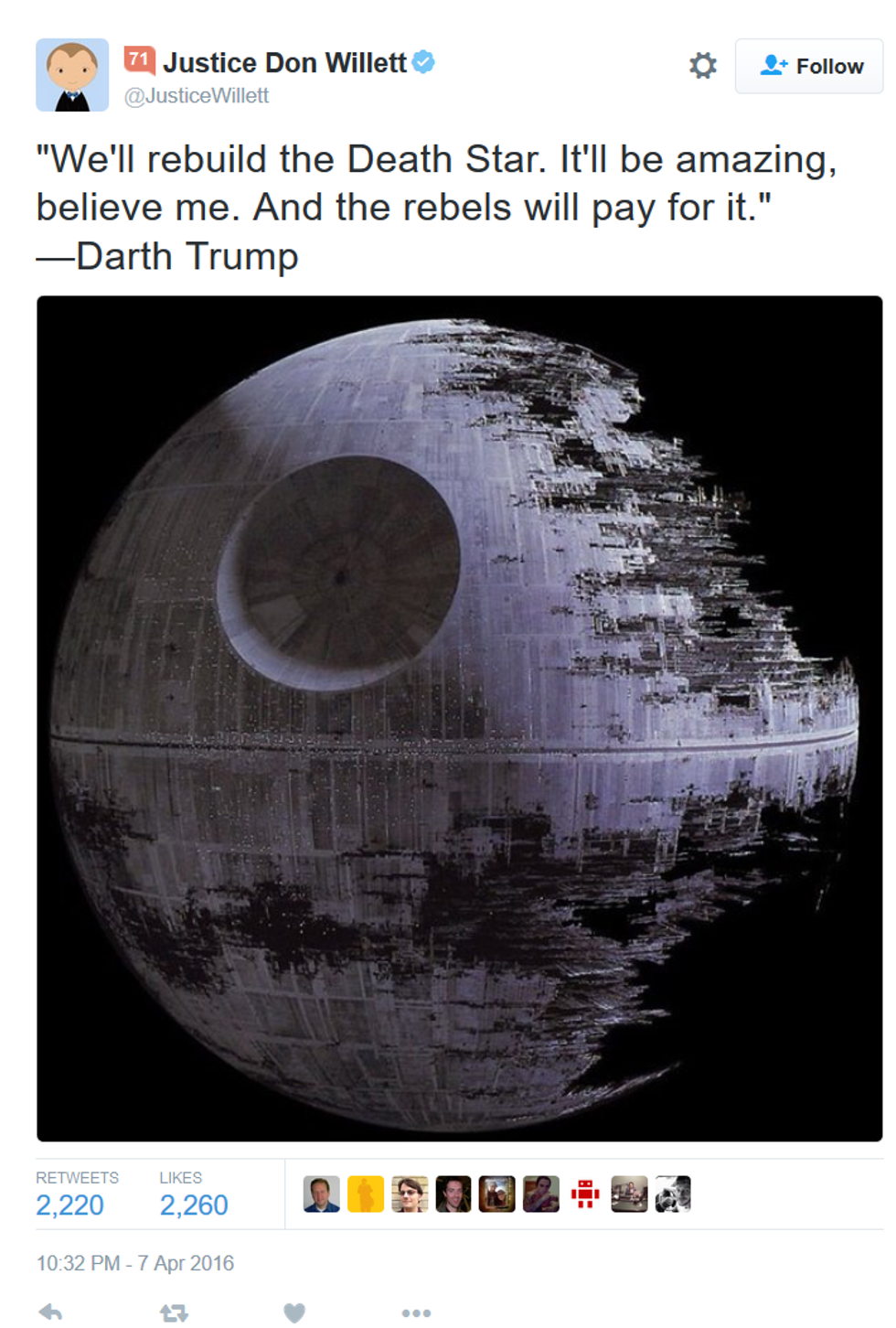 Presumptive GOP presidential nominee and Dark Lord of the Sith Donald Trump climbed atop his podium to announce his potential SCOTUS picks yesterday, and they were pretty much the same wingnuts and religious zealots the GOP's been ramming and cramming down our throats for years. Disregard the fact that Trump was never, ever, ever going to put his teeny little hands together, pray to the angry spirit of Ronald Reagan, and do the bidding of Reince Preibus, those were all just fancy-talkin' brain words! Suggestions of ideas he might potentially consider after maybe putting some serious speculative thought towards an actual policy platform.

"The following list of potential Supreme Court justices is representative of the kind of constitutional principles I value and, as President, I plan to use this list as a guide to nominate our next United States Supreme Court Justices.”

Out of the 11 names put forward to replace the fat, bloated corpse of Justice Antonin Scalia, ONLY eight were men, but don't fret, ya'll! The rest were the same, regular old white people endorsed by the batshit fringe groups, like the Federalist Society, who make sure that all 10 Commandments are prominently displayed in front of local courthouses. Of the nominated judges, six were appointed to federal appeals courts by The Decider, George W. Bush, and five were appointed by Republican Governors to state Supreme Courts. Naturally, Barry Bamz sicked Josh Ernst on an eager press gaggle to lay the smackdown on Donald's Judicial Legion of Doom. Earnest said he'd "be surprised if there are any Democrats who would describe any of those 11 individuals as a consensus nominee," pointing out that's exactly what Orrin Hatch had called Judge Merrick Garland in 2010. Then he reminded the Senate, once more, to do its damned job and give Garland a hearing.

Our personal favorite of the Trump Crop is fast-tweetin' Texas Supreme Court Justice Don Willett, because this guy's got some serious huevos:

Jesus, these Evangelicals sure seem to cry a lot!

"I've felt a great disturbance in The Force..."

Justice Willett has been firing off against Trump since last year, and he hasn't really stopped, which is Double-Plus Good considering he is now being eyeballed to tell us what we can and can't do with unborn babies, public sector unions, and immigrants. Now that some advisor has no doubt informed Trump of Willett's tweets, we'll assume he's not at the top of the list; the real question is whether the new "more presidential" Trump can refrain from starting a Twitter war with one of his own handpicked (cough!) potential nominees.