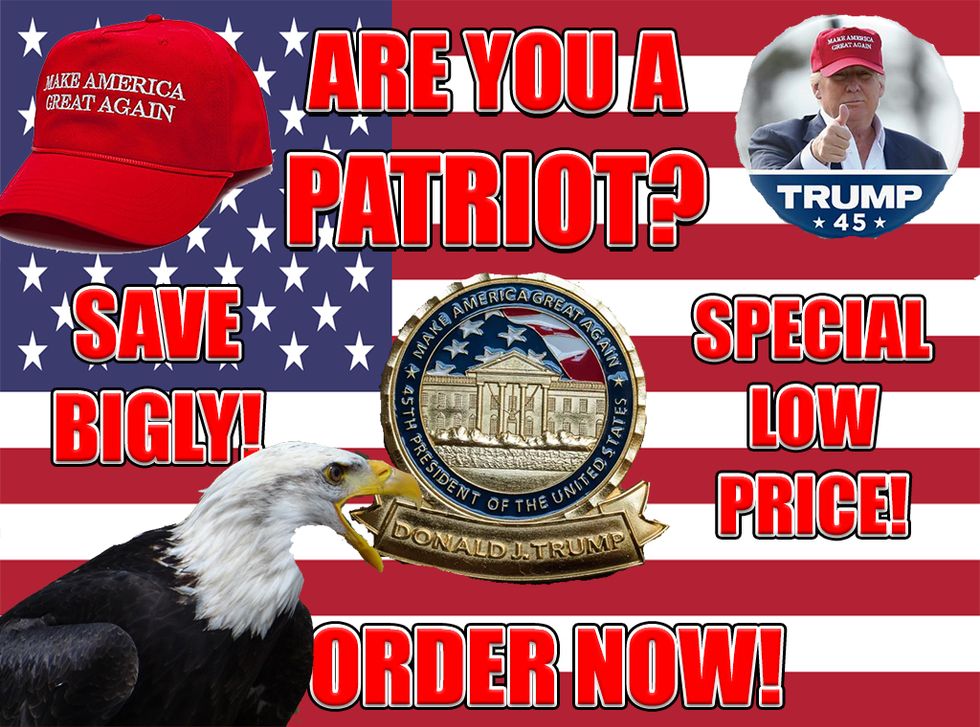 The new presidential challenge coin is a monument to Donald Trump. Trump's dedication to obliterating any semblance of decorum and tradition has now extended to one of the lesser known areas of American culture, one populated by old farts in VFW halls and noisy dickheads on Harleys. Once again, by the grace of American Jesus, Trump has bastardized an American tradition.

Challenge coins are typically given out for special achievements, and the Trump presidential coin is exactly what you'd expect from the greatest achiever of them all: a guy who went bankrupt on casinos. Rather than the standard presidential seal surrounded by a regal blue ring, Trump's coin is fat and gaudy. It looks like it would be sold on late night television with a tacky dinner plate and a Trumpy Bear. It's literally been designed to function as a free-standing trophy, somewhere between the $100 glass easter eggs and flag pins.

As a symbol of the President of the United States, Trump's name appears three different times, four if you count the chicken scratch signature. The coin replaces the national motto, "E pluribus unum," with "Make America Great Again. At least now it's in English.

Some are upset that the Trump-branded POTUS coin sends an inappropriate message since they're commonly given to members of the military. As literal tokens of gratitude given by the president, there's concern that the coin could be seen as an endorsement to partisanship as opposed to an award for people who sacrifice themselves to ensure that we can make dick jokes on the Internet. Former FEC lawyer Trevor Potter noted that,

“For the commander in chief to give a political token with a campaign slogan on it to military officers would violate the important principle of separating the military from politics, as well as diminishing the tradition of the coin.”

Like most American traditions, challenge coins have a fuzzy history. They started off as badges of membership among military units, and naturally spawned drinking games. Coins are often minted by officers and passed out to their subordinates to serve as reminders of a particular mission, like Desert Storm/Shield, or entrance into storied/elite units, like 1st Air Cavalry. They're kind of useless and dorky things to carry around, like a baseball card.

Depending on who you are, challenge coins aren't that big of a deal. I've been awarded several several challenge coins over the years, primarily for drinking heavily. After being knocked on my ass for running my mouth, I went shot for shot with some Naval cadets in Annapolis and got one. Another time I was at a dive bar in Bethesda and a broke vet traded me his Iraqi Freedom coin for a pitcher of beer and some cigarettes. However, I've also known old folks who've display their coins in elegant shadowboxes, just in case you had any doubts about their patriotism.

These days everyone has a challenge coin. Motorcycle clubs use them as membership tokens, fire and EMS workers dole them out, Interior Secretary and grifty bastard Ryan Zinke (naturally) has one, and there's even one for a Star Wars cosplay group.

It's not much of a surprise that Trump's coin is a hot, golden garbage, so I offer you my own challenge. If you ever see me in some dimly lit bar, and all you got is that fugly Trump challenge coin, slap down it on the bar; tell me how you got it and I'll buy you a beer. I'm not starting a collection, I just want to put those coins where they belong -- in the trash.