Trump Pretty Sure Jesus Wants Your Doctor To Discriminate Against You 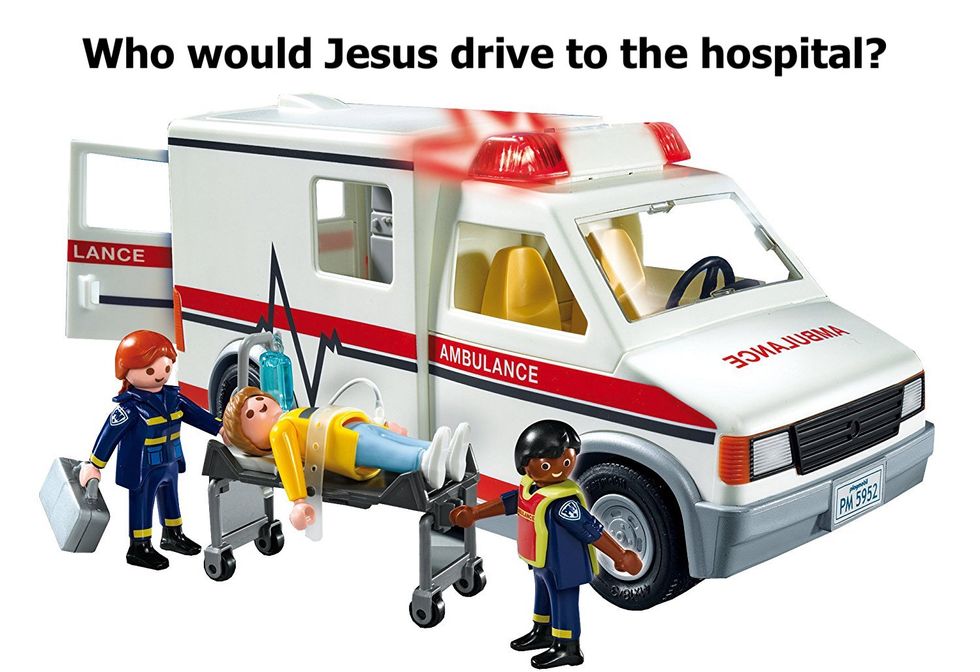 A new rule being proposed by the Trump administration will shield health care workers -- including doctors and EMTs -- from being fired for refusing to do their job when doing so would violate their religious beliefs. This could include a variety of appalling things, including refusing to treat gay or transgender patients, refusing to perform medically necessary abortions, refusing to treat patients with HIV or AIDS, refusing to provide artificial insemination to lesbian couples, and any number of other things people might object to on "moral" grounds.

The rule would establish a new division of the HHS civil rights office that would be focused entirely on making sure that health care providers are able to "opt out" of services and procedures that they object to on religious grounds.

Politico reports that this would likely mean we'd revert back to some Bush-era rules that often put patients at risk:

The Obama administration in 2011 rewrote a series of Bush-era protections designed to protect the moral and religious beliefs of health care workers. Opponents of the Bush rules argue that they were too broad and could have allowed workers to opt out of end-of-life care, providing birth control and treatment for HIV and AIDS. For instance, some workers cited their moral objections when denying fertility treatment to lesbian couples or not providing ambulance transportation to a pregnant woman seeking an abortion.

(Why would you take an ambulance to an abortion? If you are having an emergency abortion.)

Republicans are trying to present this as all very reasonable and fair -- using an example of someone being forced to perform an abortion against their will, even a lifesaving one -- or risk losing their job.

“To be forced under pain of losing one’s job is just outrageous,” Rep. Chris Smith (R-N.J.), co-chairman of the Bipartisan Congressional Pro-Life Caucus, said last week. President Trump is “now looking to remedy that through the HHS mechanism — hasn’t happened yet, but it will.”

Of course, in certain situations, it should absolutely be up to the hospital to provide reasonable accommodations for their worker's beliefs. If there's a nurse who does not want to assist with an abortion? Fine, don't put them in obstetrics. Assign them to neonatal or some other area. That is a reasonable accommodation. At the same time, if what is needed is someone who can provide these services, then there isn't much reason to keep someone on who won't. A hospital should not have to be in the position of turning down patients because of your beliefs. If you are hired for a job, you have to do that job. Especially when you refusing to do your job puts someone's life or well-being at risk.

It is also reasonable, however, to expect that people with certain religious beliefs not get jobs that they can't do without violating their religious beliefs. A Jehovah's Witness should probably avoid hematology. An Orthodox Jew should not apply to work at a business that requires working Saturdays. A Scientologist should not go into pharmacology. A Christian Scientist should probably avoid the medical profession altogether. If you religiously object to the existence of transgender people, perhaps a career in the field of gender affirmation surgery is not for you. As an atheist, I should not look to join a convent, regardless of how appealing that may seem on some days.

If you insist upon having a job you cannot do, then the place you work for ought to have the right to employ someone who will. What if it is their religious belief that all patients seeking treatment should get it? Should they be required to violate that?

Patients also ought to be able to have reasonable expectations of their own when it comes to health care providers. Someone calling 911 should not have to "reasonably" expect that they will not be transported to the hospital because the EMT or ambulance driver religiously objects to their existence or the type of help they require. They should not have to sit around and wait for another ambulance to come. That is dangerous.

There are also issues, certainly, in areas with few doctor's offices or hospitals. If you're a transgender person and every doctor or hospital near you refuses to provide you with medical care because you happen to be transgender... what are you supposed to do?

There is also the issue of money. Once upon a time, when I first moved to Chicago, I lived right down the street from a hospital. Figuring it was convenient, I made an appointment with a doctor there because I needed a GP and a birth control prescription. WHOOPS! I was told by the doctor that they were not allowed to prescribe birth control there because it was a Catholic hospital -- despite the fact that I had actually had a prescription since well before I was sexually active, because I got really bad cramps and it was the only thing that helped. I still had to pay for my appointment. Now, sure -- that was on me not knowing that Catholic hospitals don't give birth control prescriptions. But if there's no way to know ahead of time that you are not going to be given care, a patient runs the risk of spending money (and possibly time) they don't have trying to seek that care.

Also money-related? Despite the fact that we don't have universal health care in this country, a lot of hospitals still receive a lot of tax money. By enacting a law like this, you are asking people to help fund hospitals where they might not get the best care possible because of a health care worker's religious objection to providing that. There is also, quite frankly, the issue of an employer only paying someone to do only part of their job -- which does not seem fair to people who are being paid the same to do the whole entire job.

We don't allow people who own restaurants to refuse to serve black people -- even if their racism is somehow related to their religion. (Yet.) We don't have these laws to prevent people from being "bad" or "immoral," we have them because the people going to that restaurant have a right to public accommodation. The idea that this should not also be true for something as necessary as health care is appalling.