Donald Trump, Paul Ryan Is Not That Kind Of Girl! 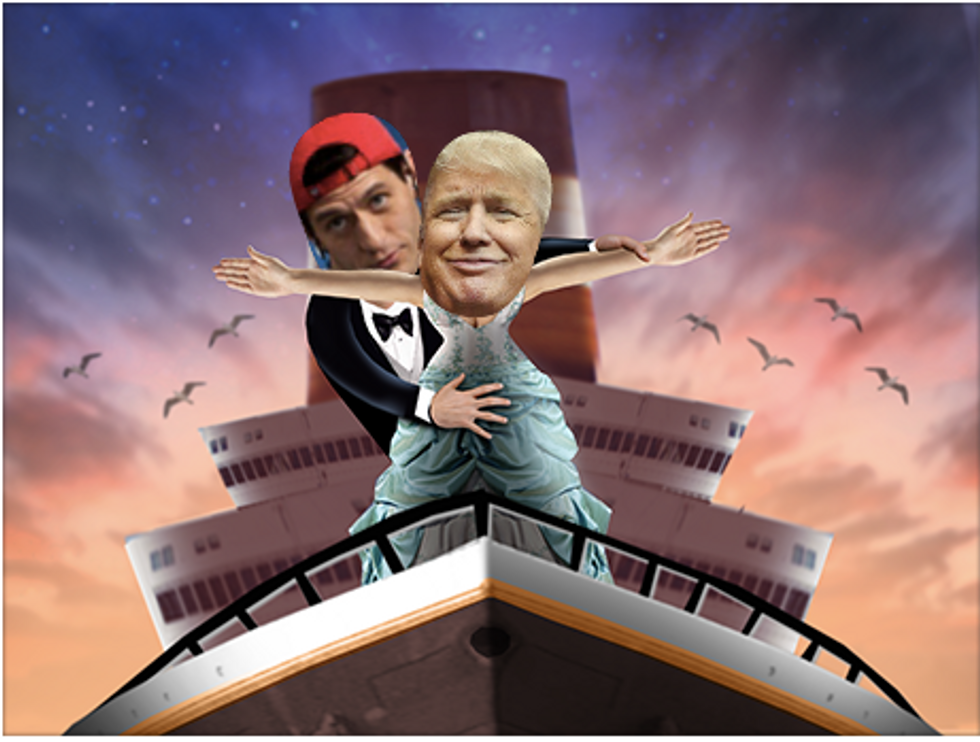 For weeks now, we have been promised a special meeting between presumptive GOP presidential nominee Donald Trump and Speaker of the House Paul Ryan, who people for some reason like to pretend is good at math and not a lunatic. THAT DAY HAS FINALLY COME.

Paul, who had previously refused to get on the Trump Train, met with the tie salesman/reality star on Capitol Hill this morning, and they had a nice chat about things that they agree on. Like the fact that Hillary Clinton is basically Satan. Did they have other things in common? Did Ryan give him workout tips? We are not sure. The joint statement they released appears to be pretty vague about everything other than definitely not liking that bitch whatsername.

“The United States cannot afford another four years of the Obama White House, which is what Hillary Clinton represents. That is why it’s critical that Republicans unite around our shared principles, advance a conservative agenda, and do all we can to win this fall. With that focus, we had a great conversation this morning. While we were honest about our few differences, we recognize that there are also many important areas of common ground. We will be having additional discussions, but remain confident there’s a great opportunity to unify our party and win this fall, and we are totally committed to working together to achieve that goal. We are extremely proud of the fact that many millions of new voters have entered the primary system, far more than ever before in the Republican Party’s history. This was our first meeting, but it was a very positive step toward unification.”

Yes, this seems very enthusiastic, and as though a great time was had by all. Paul Ryan is going to do a real good job of acting like Donald Trump is not an insane person and that all of this is going to go really well for them! They are being positive! They are directing their feet to the sunny side of the street that is four years of Donald Trump calling world leaders bimbos and crazies, and probably blowing up some places should those leaders say "not very nice things" about him. LIVIN' THE DREAM.

However, Ryan is still playing hard to get and saying that he is not yet ready to fully endorse Trump, as he doesn't believe in party unification on the first date. He's just not that kind of speaker.

OH, by the way? That last part about allllllllll the new voters Donald Trump is bringing in? That is not actually true! Mostly he is just bringing in registered Republican voters who do not usually vote in primaries. As much as he wants to pretend that his milkshake brings all the Independents to the yard, polls show that this is not the case at all, and the Democrats are in fact doing better with Independents. That poll I just linked to also says that no one likes Paul Ryan either, and that 45% of voters would be less likely to vote for a Senate hopeful who supports Donald Trump. Maybe this is a thing they can bond over during their next breakfast date!

But hey! Donald Trump also says that nobody respects women more than he does, and that he is very good with "the blacks" and "the Hispanics" and seems to be running on a "If you repeat it enough, maybe people will believe it is true" platform, so why start living in reality now!