Trump Shitcans Aides For Blasphemies Against The Dear Leader 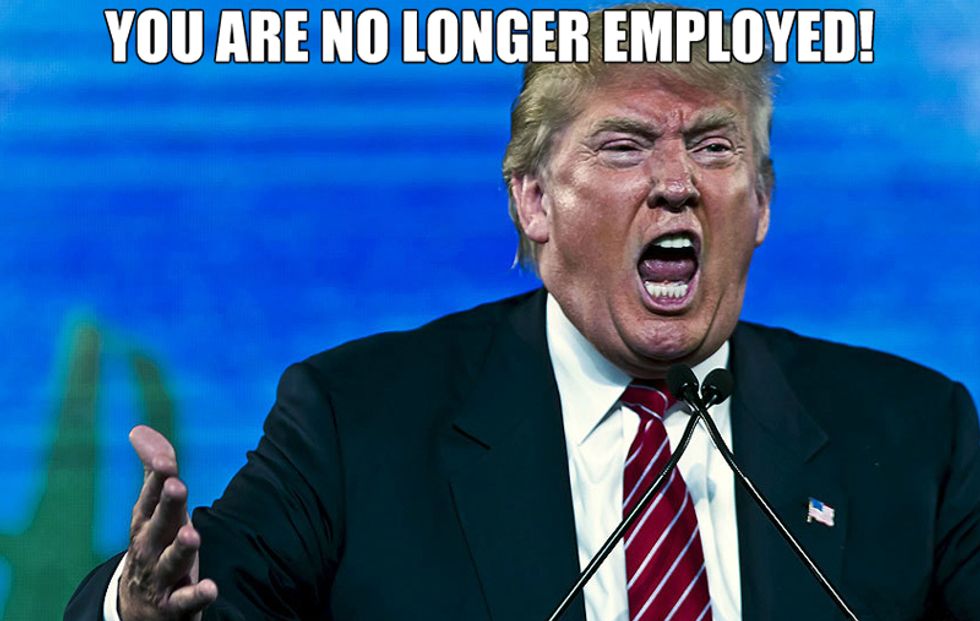 The White House has fired a couple of aides for disloyalty because they said bad things about the thin-skinned yam-creature in the Oval Office. First to go was Shermichael Singleton, a top aide to Ben Carson, Trump's nominee for Housing and Urban Development, in a move that's notable largely because the poor guy was fired before his boss has even been confirmed by the Senate. Singleton got the boot because it was discovered that he had criticized Trump during the campaign. Then on Friday the ax fell on Craig Deare, a senior National Security Council aide, after he reportedly criticized the President and the chaos in the White House, which as we all know they have not got, because it's a well-oiled machine.

Singleton had actually been working at HUD as a senior adviser since January 23, and was planning a cross-country trip for Carson, presumably complete with frequent caffeine injections or at least someone to poke him from time to time to keep his eyes open. Unfortunately, Singleton's background check was not yet completed, and administration officials found that he had written bad things about the Great Man. In an October piece for The Hill, Singleton said Trump focused too much on negative aspects of the African-American community, and that he "never mentions the many hardworking, good and honest people who are simply trying the best they can to achieve their share of the American dream." Which of course he never does, but you can't have such a dangerously truthful person working in the administration. Worse, Singleton wrote,

My party in particular has allowed itself to be taken over by someone who claims to be a Republican but doesn't represent any of our values, principles or traditions.

He also said, in a now-deleted Tweet, "There is no way I can bring myself to vote for Donald Trump in November" and said Trump's mockery of disabled reporter Serge Kovaleski had "taken us to a new moral low." So yeah, definitely not a team player, although the New York Times reports someone close to Singleton said he had "expressed remorse for the piece and support for Mr. Trump." Nonetheless, last Wednesday Singleton was given the heave-ho for failing to recognize that mocking disabled people is really very funny. Buzzfeed reported Carson was “baffled” and “speechless” to learn that Singleton was walked out of HUD by security. Buzzfeed attributed his reactions to a "source close to Carson" but did not specify how the source distinguished this from Carson's everyday state of bafflement and blank-eyed astonishment at our big, confusing world.

The firing of NSC senior director for Western Hemisphere Affairs Craig Deare came after a much more recent offense against the dignity of the presidency (luckily, Trump himself is exempt from firing for that reason). Deare unwisely aired the administration's dirty laundry at an event hosted last week at a Washington think tank, at a "private, off-the-record roundtable" for about two dozen scholars at the Woodrow Wilson Center. Deare's behavior was reportedly abominable:

Deare harshly criticized the president and his chief strategist Steve Bannon and railed against the dysfunction paralyzing the Trump White House, according to a source familiar with the situation.

He complained in particular that senior national security aides do not have access to the president — and gave a detailed and embarrassing readout of Trump's call with Mexican President Enrique Peña Nieto.

That monster! Should come sit BY US!

While Singleton will reportedly return to working for Carson's best pal Armstrong Williams, it's unclear what Deare's next move will be. A former dean of administration at the National Defense University, it's anyone's guess whether someone with outspoken views against the Trump administration can possibly find another job in academe. Godspeed, Mr. Deare!

It's unclear whether the Trump administration can afford to fire as many as two people a week, considering the rate at which it is so far failing to even nominate people for jobs requiring Senate confirmation:

In order to find appointees who uncritically support him, Trump may soon have to start nominating random followers of his Twitter feed, according to undersecretary of state @StopWhiteGenocide.

Wonkette is loyal ONLY TO YOU. Now give us money.