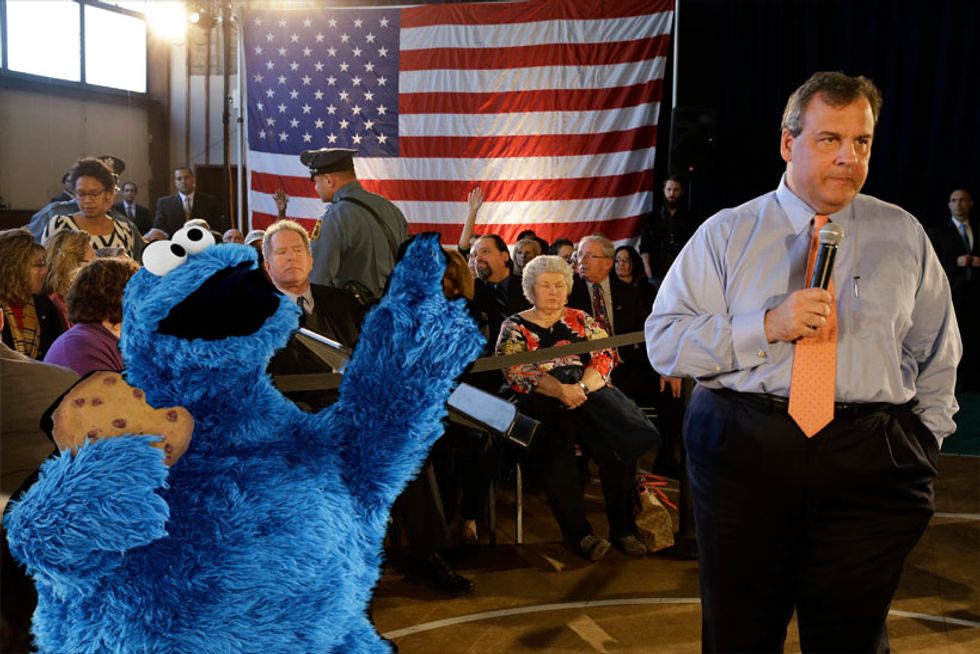 Donald Trump is now dictating the snacks Chris Christie can and can't eat, because he wants all his WASPy spokes-whores to look absolutely stunning and marvelous when they strut their silicone this summer. How can we make Make America Great Again without making it beautiful first?

At a fundraiser to help pay off Christie's $200,000 campaign debt Thursday night, Trump addressed a thrall of minions with cash to burn and promptly fat-shamed the shit out of Chris Christie to his face (because apparently the poor, boot-licking bastard hasn't been humiliated enough).

“You’re not eating Oreos anymore. No more Oreos. For either of us, Chris. Don’t feel bad."

Trump's comments came during his criticism of Nabisco, which announced last year that it would be shuttering its Chicago plant to outsource 600 jobs to Mexico -- where nobody has gluten allergies, HOW WEIRD! -- a cost-cutting maneuver aimed at saving the company millions. Only Donald Trump is allowed to outsource jobs!

Trump wants us all to know that the only two-piece you should be concerned about is how your biscuit looks in a bikini. He doesn't dig uggo girls, OK? It's just not enough to have some "No Fat Chicks" mudflaps and a pair of Truck Nutz on the president's limo! Just you wait, America, Trump is even going to put the Statue of Liberty on a diet (because she's French, and croissants are NOTHING but fatty carbs)!

[wonkbar]<a href="http://wonkette.com/585280/chris-christie-eated-all-the-snacks"></a>[/wonkbar]Besides, it's not a (HUGE) secret that Christie had lap-band surgery, and though he may deserve to be jerked about like a stubborn dog on a leash, mocking the man because of his weight is a bit of dick-move best left to the professionals at Wonkette.