Trump So Sad He Can't Be Tinpot Dictator Like They Have In North Korea :( 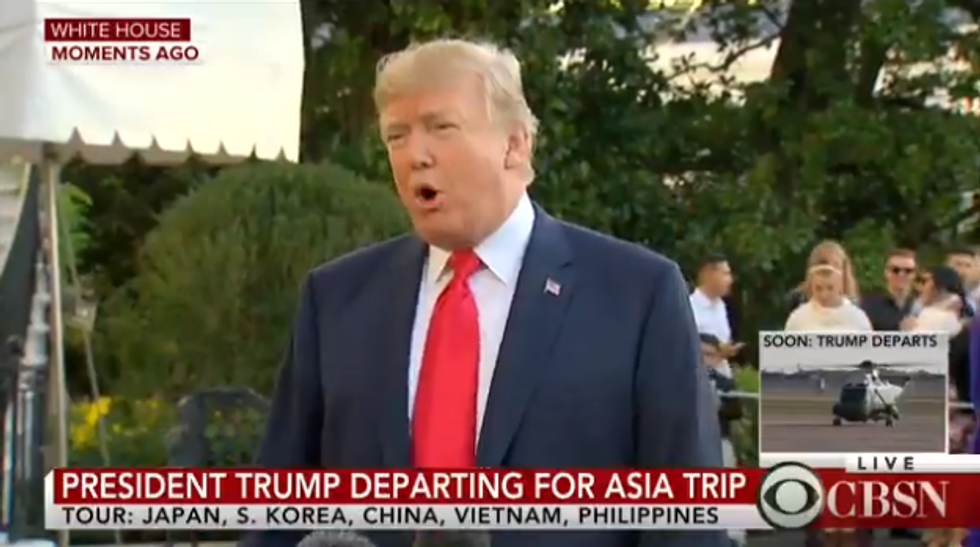 Donald Trump is having the sad type of meat sweat right now. He knows the Russia investigation is FAKE NEWS and that the REAL scandal is how Hillary Clinton and Robert Mueller and James Comey had a uranium slumber party in Russia. It would be so fun for him if he could just run the FBI and the Justice Department from his gold-plated toilet and force them to investigate that stuff, but he can't because "laws" (pfffffffft) and "Constitution" (PFFFFFFFFFT!) and gah you guys, being president of America sucks. Trump said this in an interview with a DC radio show on Thursday:

WHY WHY WHY WHY WHY! Sure, America has this "democracy" in place, but shouldn't that all go out the window to make President Thin-Skin feel better? It's NO FAIR. (As Eric Boehlert notes at ShareBlue, the Justice Department guidelines that tell presidents to GTFO of their face were established after Richard Nixon's criming reign. Handy that we have them now!)

Anyway, presidenting sucks and Donald Trump would like two scoops of ice cream and maybe some cherry pie to make him feel better.

America's greatest hero deactivated Trump's Twitter account on Thursday night, but it's up and running again. So it was that Trump rolled out of bed Friday morning and did his usual routine, which is pawing out mad words on Twitter while he waddles around the White House residence, stopping occasionally to squeeze out a Chewbacca fart so loud Hope Hicks can hear it all the way over in the West Wing. ("PEE-YEW, MISTER PRESIDENT!" is a thing Hope Hicks probably says a lot. Maybe it will be the title of her memoir.)

As you can see from his morning tweet storm, Trump might know on some level that he's not allowed to be dictator, but OMG HE STILL WANTS TO SO BAD! So he just figured he would play dictator and tell the Justice Department and FBI to investigate his political opponents, because YOLO!

Jesus Christ, what the fuck is wrong with him?

There is a lot of bullshit to unpack here, but we will give it a try:

But back to the person we are supposed to call "president"! Trump continued his Twitter stream of consciousness word salad with reporters at the White House Friday, saying blah blah blah "Hillary" blah blah blah "Donna B," and so forth:

Trump on the Russia probe: “It’s a disgrace, frankly, that they continue.” (via CBS) pic.twitter.com/3vwEvvOWnR