Trump Still Gets A '10' On Puerto Rico. If We Are Talking About The Number Of People With Both Water And Power. 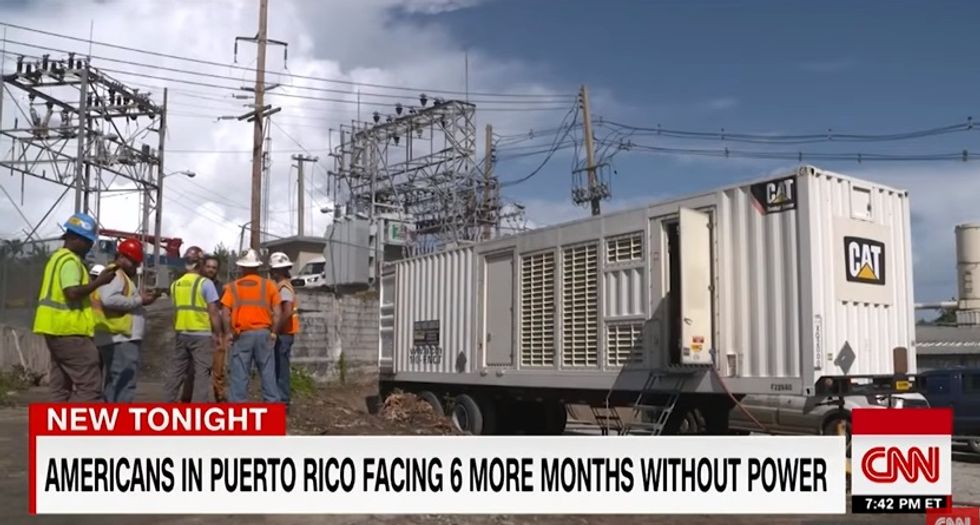 If Americans were in trouble, surely the government would do more...

It's been over 100 days since September 20, when Hurricane Maria knocked out Puerto Rico's power grid, and we have excellent news: About half of Puerto Rico's homes now have power. But wait, you may say to yourself, hasn't Puerto Rico had "about half" of its power restored for weeks now? That's what we kept hearing too! Turns out that was half of the grid's generation capacity, which CNN explains "does not reflect the number or percentage of Puerto Rico's population that has power." So now, as of Friday, says Governor Ricardo Rosselló, roughly 55 percent of the homes that are capable of getting electricity -- that is, not so damaged that a live line wouldn't do them any good -- are now actually getting power. The downside is that almost half the island's population -- over 1.5 million people -- are still going without power. Some parts of the island have been dark even longer, since Hurricane Irma on September 6, which knocked out 20 percent of the island's power to start with.

Rosello has requested up to 1,500 more workers to come to Puerto Rico to fix the grid.

In its statement on Friday, the authorities said power restoration has been slow because of the sheer scale and complexity of the damage. Much of the island’s 2,400 miles of transmission lines, 30,000 miles of distribution lines and 342 substations were damaged in the storm, they said. Carlos D. Torres, the system’s restoration coordinator, said workers were finding “unexpected damage” in some areas even as they make repairs in others.

José E. Sánchez, who heads the U.S. Army Corps of Engineers task force to restore power in Puerto Rico, said some homes were so damaged they are unable to receive electricity, though he did not know how many homes were in that situation.

That 55 percent figure includes five towns that haven't yet been hooked up to the "regular" grid, such as it is, but are getting power from diesel generators brought in by the Corps of Engineers.

Sánchez at least has the decency to agree that 55 percent of homes getting power isn't much to brag about:

He said the Corps has increased its number of crews working on the island, and many of the materials ordered in October are beginning to arrive. Some private companies that had committed to help Puerto Rico will begin to arrive in January.

Sadly, the two guys from Ryan Zinke's home town are not included; we bet they could have gotten this all fixed by now if only liberals hadn't run them off.

Residents of Puerto Rico seem to have noticed that the flood of workers and supplies that got stuff fixed quickly in Houston and Florida following Harvey and Irma somehow never made it out to the territory, and they don't seem terribly convinced that's solely because it's an island, sitting in the middle of an ocean, a very big ocean, which maybe they didn't know. One resident of Arecibo (yes, the place with the radiotelescope) was still disgruntled even though his city has electricity and he personally has the greatest first name in a news story this week:

“A lot of people are angry,” said Cannabis Nebot, 43, who lives in Arecibo, where power was largely restored. “They don’t believe what the government says about the power outage. You can see on Facebook a lot of people saying that they got no light. A lot of people in the countryside have no light. Or some towns have it, but it comes and goes.”

Communities on the eastern end of the island, where the hurricane hit first and hardest, still lack not only power but also clean running water in many areas. In the resort city of Humacao, NBC News reports, the grid wasn't just damaged, it was essentially obliterated. No tourists are coming, and a Bristol-Myers Squibb pharmaceutical factory that employs 300 people is still on generators only. The biggest shopping center in the community is still closed due to storm damage, and gas stations may or may not be open on any given day.

With all the insanity and chaos, there are also some encouraging steps -- the Army Corps is setting up microgrids for small areas to have power without waiting for the main grid to be rebuilt, and entrepreneurs are popping up with solar and wind power. NBC looks at a nonprofit in Humacao that has expanded from a pre-storm focus on social services to providing relief and, in one poor neighborhood, using a $20,000 grant to install a solar and wind powered water filtration system that can clean 5,000 to 6,000 gallons of water a day. It's more than that neighborhood needs, so they're bottling and selling the surplus; they hope to use the proceeds to build a local solar grid and rebuild the area's drainage system to reduce floods.

In mid-December, Caribbean Business reported that the island's utility, the Puerto Rico Electric Power Authority (PREPA), is desperately short of the supplies needed to get power back on, particularly since prior to the storm, the bankrupt utility had been in austerity mode and spent only minimally on inventory. Of the 52,480 wooden power poles needed to get power back to every neighborhood (or at least those still standing), PREPA so far had just over 6,000, with another 8,500 due to arrive by early this month. 17 million conductors are needed; by the middle of last month, the utility had 347,000, with another 4.5 million on the way. Crews from the mainland arrived ready to get to work, but the stuff they needed just wasn't there to install.

Getting supplies has also been complicated by the two other major hurricanes: Texas and Florida snapped up much of what suppliers already had in stock; the California wildfires have also taken out a lot of power lines, and while getting replacement equipment to those mainland rebuilding efforts is definitely easier, Puerto Rico is especially disadvantaged by a president who gave himself 10 out of 10 on Puerto Rico and considers that his final grade, never mind the actual state of things on the island.

The disaster in Puerto Rico is still happening, and the death toll, according to an estimate by the New York Times, is probably over 1,000, not the 64 of official reports.

Maybe Donald Trump could drop by the island and throw some more paper towels. Or he could go fuck himself, for all the good he's done for American citizens he's completely forgotten.

Yr Wonkette is supported by reader donations. Please click here to help us, and if you're in the mood to help that nonprofit group in Humacao, they have a donation link.