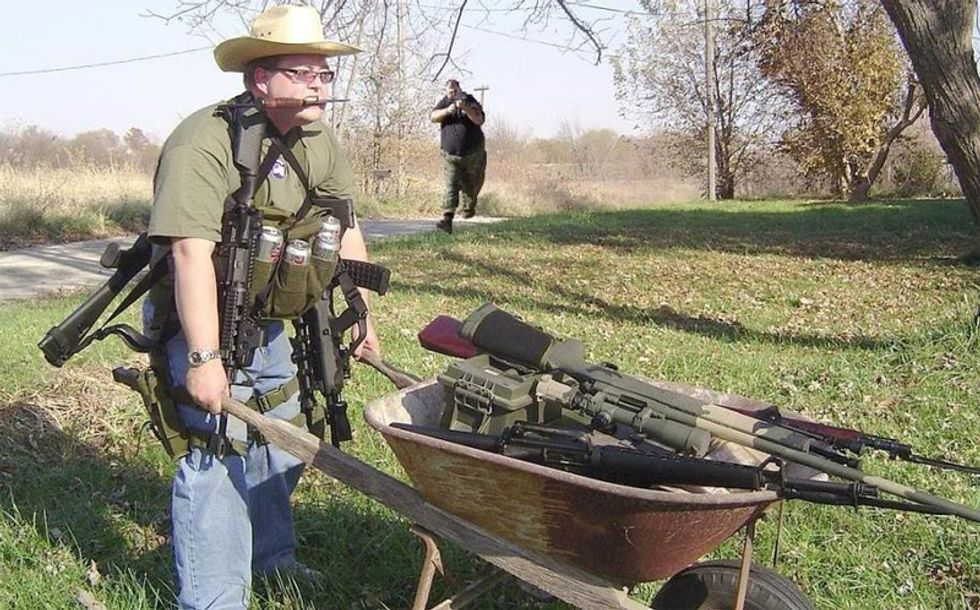 Oh sure, it LOOKS like a staged photo, but this is Amurka (still assuming staged)

Terrific news for gun-humping radical extremists all over America, or at least those who don't pray the wrong way: The Trump administration plans to change the focus of a program aimed at steering people away from all violent extremist groups, targeting its efforts only at "Radical Islamic Terrorism," because as we all know, the best way to defeat international terrorism is to say the Magic Words. And also to ignore domestic terrorists of any stripe other than Islamic, since who ever heard of anyone but a radical Muslim doing terrorism in America? You know, other than Tim McVeigh, David Koresh, Dylann Roof, The Order and its string of bank robberies and murder, and the occasional lone nut with a gun who acts wholly on his own, except every single one of those is a false flag hoax.

Let's get real. Donald Trump gets all his national security information from The Shows. So if Fox News can't remember any non-Muslim terrorists, why should he? And if a thing isn't sparkly enough to catch Donald Trump's attention, then why should the government waste time and money on it? Obviously, it's time for some changes, according to five people who've been briefed on the matter who spoke to Reuters (the only good thing about TrumpWorld is that it leaks like a militiaman's beard on MRE Beef Stew Night):

Such a change would reflect Trump's election campaign rhetoric and criticism of former President Barack Obama for being weak in the fight against Islamic State and for refusing to use the phrase "radical Islam" in describing it.

In its current form, the CVE program aims at identifying and deterring potentially violent groups or individuals from becoming radicalized, and includes both community outreach and education to dissuade people, and attempts to send counter-messaging against radicalism through social media. The CVE program operates only within the U.S., and is separate from military and intelligence agencies' programs to counter jihadist propaganda abroad. Even though it only started awarding grants this year, the program has been criticized for heavy-handed or ineffective messaging to targeted audiences, because when did "just say no" ever work with anything? Some of the criticism from conservatives has insisted that the program should leave good gun-humping patriots and sovereign citizens alone, and should focus solely on deterring Muslims from becoming radicalized, because Political Correctness pretends that there are any domestic threats other than Islam.

Also, there were some methodological flaws in a 2015 study that found more Americans had been killed after 9/11 by rightwing domestic terrorists than by radical Islamists, so you are not allowed to mention domestic non-Islamic terrorists at all. Such talk is only a plot to take our guns away!

Reuters notes that proponents of the existing program have this crazy idea that focusing solely on Muslims could actually backfire, making American Muslims even more leery of cooperating with an administration they don't especially trust. Clearly, that can't be right, since anyone who doesn't trust Trump already hates America. Of course, one of the weaknesses of CVE right now is that Muslim and immigrant groups are already afraid the program is merely a cover for surveillance, not a genuine attempt to dissuade people from radicalism. Imagine that -- why on earth would Muslims ever get that impression?

It's hard to call the current program a "failure," even, since it only recently came into being:

The Obama administration sought to foster relationships with community groups to engage them in the counterterrorism effort. In 2016, Congress appropriated $10 million in grants for CVE efforts and DHS awarded the first round of grants on Jan. 13, a week before Trump was inaugurated.

Among those approved were local governments, city police departments, universities and non-profit organizations. In addition to organizations dedicated to combating Islamic State's recruitment in the United States, grants also went to Life After Hate, which rehabilitates former neo-Nazis and other domestic extremists.

We should note that in Europe, such attempts to help members of radical groups have been around a while, and seem to have had some success. In one lovely instance, a German town even punked neo-Nazis, using a fascist march to raise funds for such an "exit" program: The more the Nazis marched, the more the people donated to the anti-Nazi group. But if it's European, it must be bad, huh?

Now that word of the program's new focus is getting out to community groups, they're already saying "No thanks." A Michigan group led by Lebanese-Americans, Leaders Advancing & Helping Communities, had been awarded a $500,000 DHS grant, but decided to decline the money just before Trump announced his travel ban last week. An email from the group to DHS said, "Given the current political climate and cause for concern, LAHC has chosen to decline the award." A representative of the group confirmed to Reuters they'd turned down the grant, but refused to comment further, probably because they either hate America or are worried about retribution from the Trump Flying Monkey Brigade.

Still, we bet Trump's new emphasis on singling out Muslims will work just great and not create any backlash, and that the groups trying to fight other violent extremists will be just fine. After all, since Trump took office, donations to the SPLC have gone up some, so why should we to worry about violence from neo-Nazis and sovereign citizens?

Oh, we just remembered a TV show you may want to watch: Next week's "American Experience" on PBS will be about the bombing of the Murrah Federal Building in Oklahoma City. No idea why that suddenly came to mind. Probably because Trump also wants to eliminate funding for the Corporation for Public Broadcasting.