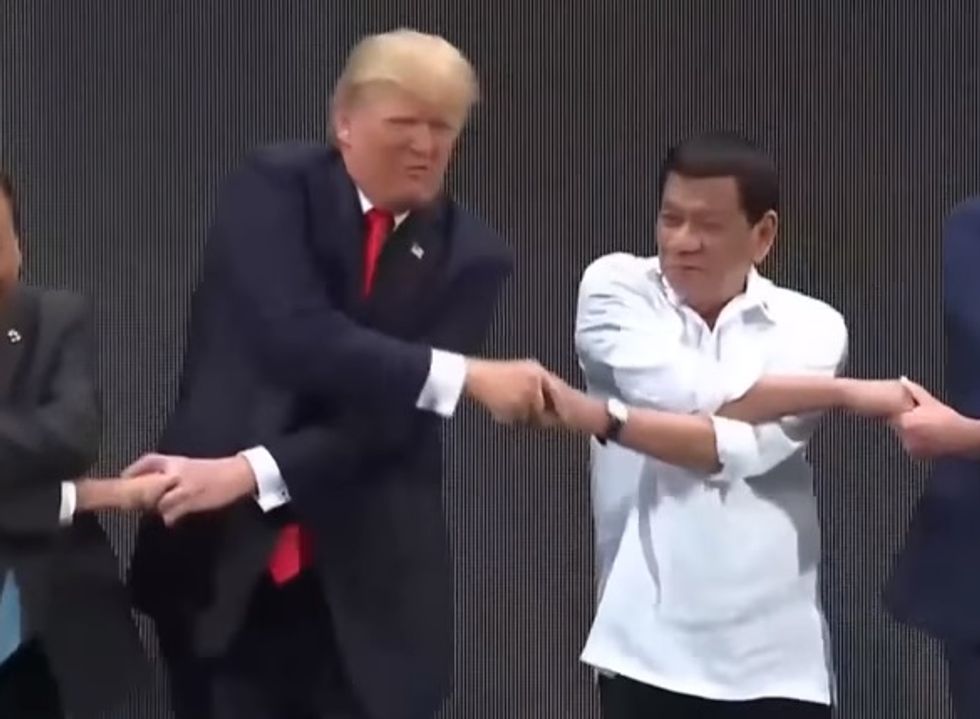 Donald Trump had himself a nice friendly visit with Philippines president Rodrigo Duterte, who has a nasty habit of murdering people he thinks are associated with the drug trade (or just being addicts), and somehow, the topic of all that murdering just barely came up, if it did at all. Why would Trump want to talk about anything that just makes a great friend of the US touchy, after all? Instead, Trump told reporters he and Duterte have a "great relationship," which for Donald Trump could mean anything from "we're doing some real estate deals" to "I remembered his name all by myself."

As reporters yelled questions about whether Trump would push the subject of human rights with Duterte, Trump smiled and ignored them, and then Duterte put the meddlesome reporters in their place, much to the delight of the Leader of the Free World. Duterte shut down the reporters, saying

“Whoa, whoa [...] This not a press statement. This is the bilateral meeting.”

He continued, “We will be discussing matters that are of interest to both the Philippines and … with you around, guys, you are the spies.”

Trump, who has repeatedly dismissed reporters as “fake news,” responded with a chuckle. “You are,” Duterte repeated, looking out at the group of journalists gathered in the room.

Then Philippine security guards hustled the reporters out of the room, and, according to the New York Times, "jostled some of them roughly," which surely was also a hoot for Trump to see. He's no doubt already asked Duterte where he can get some press-jostlers of his own.

According to White House press secretary Sarah Huckabee Sanders, the two leaders talked about lots of important stuff, and some trivia, too:

The conversation focused on ISIS, illegal drugs, and trade [...] Human rights briefly came up in the context of the Philippines’ fight against illegal drugs.

We're really trying hard not to normalize a president who buddies around with a dictator who blithely murders his own people. Sadly, that seems to be the norm now.

Translation: When Trump said in April that Duterte was doing "a great job" on dealing with drugs, he meant every word of it, and for all we know he mentioned human rights by saying they're no big deal. Trump had the chance to stand up to Duterte in his own capital, but instead he was a Manila folder.

The Daily Mail (yes, we know) reports that Duterte's own spokesthug, Harry Roque, denied "human rights" even came up in the meeting. "The issue of human rights did not arise. It was not brought up," Roque insisted after the leaders met:

'It was President Duterte who brought up with President Trump the drug menace in the Philippines, and the US president appeared sympathetic and did not have any official position on the matter but was merely nodding his head,' Roque said.

So the minor matter of Duterte's police having killed thousands of people without trial was either briefly mentioned, or not mentioned at all, depending on which authoritarian liar's spokesperson you believe. This is where we feel compelled to refer you all, again, to the New York Times's Pulitzer-winning photo essay "'They Are Slaughtering Us Like Animals'" (it's very graphic, just so you know) to get some sense of what isn't at all important to Donald Trump.

Sunday evening, Duterte literally crooned a love song to Donald Trump at a gala dinner for the Association of Southeast Asian Nations summit, serenading Trump with the sentimental Philippine ballad "Ikaw," which he said he was performing "upon the orders of the commander in chief of the United States," who can tell him what songs to sing but not to please stop murdering people in the streets. The song includes the line “You are the love I’ve been waiting for.”

Can anyone doubt the sincerity of the sentiment? Duterte has to love Donald Trump, especially since that mean old Barack Obama dared to criticize all the murder, which led Duterte to diplomatically call Obama a "son of a whore" last year.

Despite his reluctance to press Duterte on the whole "killing thousands of his own people" thing, Trump has at least mentioned "human rights" a couple of times during his Asian tour, the Washington Post notes:

In a speech to the South Korean parliament, Trump called North Korea “a hell no person deserves,” and he laid out in sometimes gruesome detail the abuses Pyongyang has perpetrated — including purportedly killing babies and carting the bodies away in buckets.

And in Japan, he met with families of people who were kidnapped by North Korea 40 years ago and forced to train spies how to blend in while in Japan, a gesture other presidents have made.

But unlike other presidents, Trump doesn't seem to be aware of any human rights violations outside North Korea. Maybe if Fox & Friends ever reports on Burma's genocide of its Rohingya minority, he'll get around to it. And when he does, he'll mention the Rohingya are Muslims, so maybe there are bad people on both sides.

Yr Wonkette is supported by reader donations. Please click here to help! You are the love WE'VE been waiting for.