Trump, West Virginia Team Up To Free Coal Miners From Being Alive 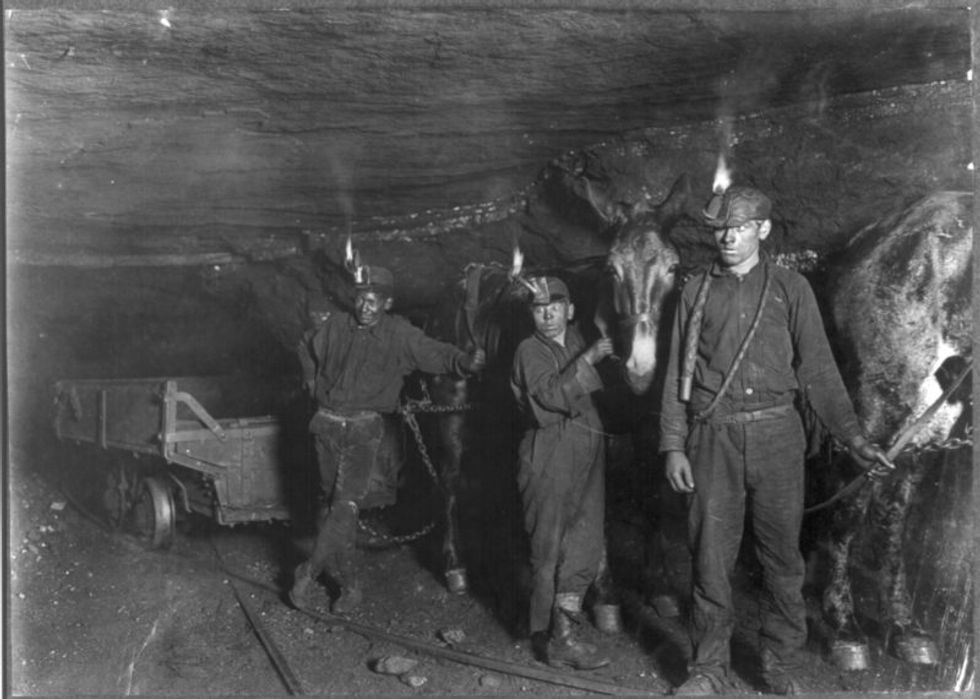 Legislators will wait til next year to bring back child labor

In a year when Donald Trump has promised to bring back the coal industry and all the mining jobs, the West Virginia state legislature is following up with a proposed law that would bring back the coal industry, too -- to safety standards that might bring a twinkle to the eye of a 19th-century robber baron. Trump's efforts to bring back Big Coal started by allowing mining operations to dump mine waste into streams (God can send more fresh water if He wants), and the Vest Virginia Lege is doing its part with a bill to eliminate state mine safety enforcement as well as wiping out decades of state mine safety laws and regulations.

The industry-backed Senate Bill 582 was introduced with little publicity Saturday by state Senator Randy Smith, who chairs a senate committee on mining and also happens to work for Mettiki Coal as a safety engineer, so he probably knows lots about mine safety. We bet he really appreciated the large contributions to his campaign from Mettiki's parent company, Alliance Resource Partners, which operates a coal mine in his district. With their help, he can now do the will of the people of Tucker County.

The bill is simply stuffed with goodies for the coal industry, like eliminating state mine safety inspections. Instead, the inspectors would conduct "compliance visits and education," but would be stripped of the power to punish violations:

The heart of the legislation is a section that simply eliminates the ability of state mine safety office inspectors to issue notices of violation or levy fines for mine operators or coal companies for any safety hazards unless they can prove there is an “imminent danger” of death or serious physical harm.

Ah, but if they see a situation that poses imminent danger, then they can at least do something. That's a relief, although the current draft of the bill will need some fiddling with to make clear what exactly the inspectors will be allowed to do:

Language in the bill offers somewhat confusing answers about what inspectors would do if they found imminent danger. One part of the bill maintains the current law, which says that inspectors must issue an order to pull all miners out of the affected part of the mine until the hazard is corrected. Another section, though, refers to a new type of process involving a “notice of correction,” that appears to carry no monetary penalty.

This seems like a perfectly reasonable approach: Inspector sees something that could kill some miners, and is limited to writing a note saying "You guys should definitely put the blade guards back on that hydra-headed claw machine of instant death before someone gets hurt." You sort of wonder if Senator Smith is also considering taking away the Highway Patrol's ticket books and requiring they be limited to warning drunk motorists, "Y'all better slow down and stay on your side of the road now, hear?"

Another lovely bit: While inspectors would lose the ability to write up or fine mine operators or coal companies, they would continue to hand out "individual personal assessments" to specific mine workers, who could still be fined and even have their certifications or licenses revoked so they could no longer work. Lots of individual responsibility and toughness for workers and supervisors, and a wag of the finger and a stern warning to management and owners.

One more great big gift to the industry: By August 31, the state would be required to

rewrite all of its coal mine safety standards so that, instead of longstanding and separate state rules, mine operators would be responsible for following only U.S. Mine Safety and Health Administration regulations. The list of areas covered by this provision includes electrical standards, mine ventilation, roof control, safety examinations, dust control and explosives.

“It completely guts the state law,” said Josh Roberts, international health and safety director for the United Mine Workers union. “You’re taking back decades of laws.”

Everyone's going to make so much money they won't mind the toxic water.

The really fun part here is that while West Virginia would be gutting its own mining laws and going only with federal mine safety regulations, the Trump administration would be busily hollowing out those very federal rules at the same time. West Virginia may be poised to keep its coveted spot as the state with the most coal-mining deaths for another straight year.

Senator Smith told the Charleston Gazette-Mail he isn't necessarily in support of keeping every last part of his own bill (which was very certainly not handed to him by industry lawyers, how could you even think such a thing?) as it moves through the legislative process. If he were King of the Mines, he'd continue to let state mine inspectors have enforcement power, for instance:

“If I could do it, I would conform with state laws and do away with federal laws, but that’s not going to happen. I would 10 times rather have the state agency telling us what to do instead of the federal.”

Yep, he'd keep the state regulators and eliminate the feds. You did not see that coming, did you?

West Virginia has quite the exciting history of incrementally strengthening mine safety laws following a disaster and then loosening them as the industry insists regulations equal taking all the jobs away. In recent years, the state's been in a deregulatory phase, cutting regulations that safety experts and unions had supported. Even after the notorious Upper Big Branch Mine explosion in 2010, the only new safety law passed by the legislature was a measure requiring drug testing for all miners, even though drug use wasn't a factor in that disaster, which killed 29 miners. The company's reckless disregard for basic safety was ultimately to blame.