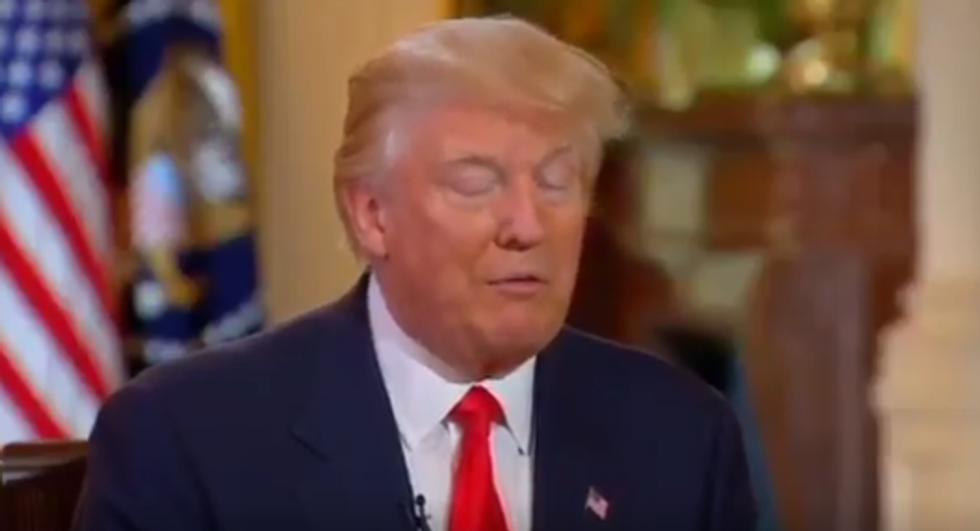 Time for another episode of "Sean Spicer Tries To Do Words," which is always a fun show to watch because there are literally no words to defend the shitshow having unprotected sex with a dumpster fire that is the Trump White House. Now, even though Donald Trump himself used his tiny fingers on Saturday to peck out that he was the victim of a "WIRE TAPP" by OBAMA, which would imply that he might think OBAMA PEOPLE (and not just the regular old FBI, no way no how) were investigating him, Sean Spicer -- who really does not want to talk about this -- said during his Wednesday press briefing that "There is no reason that we have to think the president is the target of any investigation whatsoever." NONE! NADA! Not the FBI, not Justice, not even in Congress, and certainly nothing relating to Trump's skeevy ties and maybe collusion with Russia. (SPOILER: The House and the Senate are both in the process of probing Trump by the pussy on his Russia ties, though we really need a special prosecutor or an independent commission, OR BOTH, since both committees are run by Trump-loving spooge-sicles. Also, the FBI has been investigating Trump associates for at least a year now.)

Spicer explained early on in Wednesday's presser that Trump is not being investigated:

Asked whether the president was the target of a counterintelligence inquiry, he replied: “I think that’s what we need to find out. There’s obviously a lot of concern.”

Wait, our bad! Spicer explained that Trump is not being investigated LATE in his presser, when, reports the New York Times, some aide gave him a piece of paper what told him what he is 'POSED to say:

But after an aide slipped Mr. Spicer a note, he circled back to clarify that “there is no reason to believe there is any type of investigation with respect to the Department of Justice.”

But don't worry, Spicer is not saying the wrong thing, he is just presenting Alternative Facts!

“The tweet dealt with wiretaps,” Mr. Spicer said. “The other is an investigation. They are two separate issues.”

OK. So Obama definitely did the "WIRE TAPP," but nobody is investigating Dear Leader, because why would they even?

The New York Times writes several more paragraphs, taking time to explain the definition of a "target" of an FBI investigation, a person who is "likely to be indicted," and saying there's "no public evidence" Trump is that, at this point. We wonder if the Times did that as a way of being graceful toward the Trump White House, perhaps suggesting that they are parsing their words just so. Pfffffffffft, whatever.

Because come on, NYT, these Trump White House dumb-dumbs are idiots, so let's be honest. They're backed into a corner, they know "the feds are closing in on them," as Max Boot explains in Foreign Policy (Wonkette's unofficial sister publication), and they're just vomiting whatever words they can think of to deflect and distract attention from how they are probably GUILTY GUILTY GUILTY. We just don't know precisely how much they are guilty of yet!

Anyway, Sean Spicer is a toolbag covered in dick cheese, and on top of that, here is a picture of him dressed as a bunny:

Wonkette is totally reader-supported, so be a reader who supports us, with a few bucks!