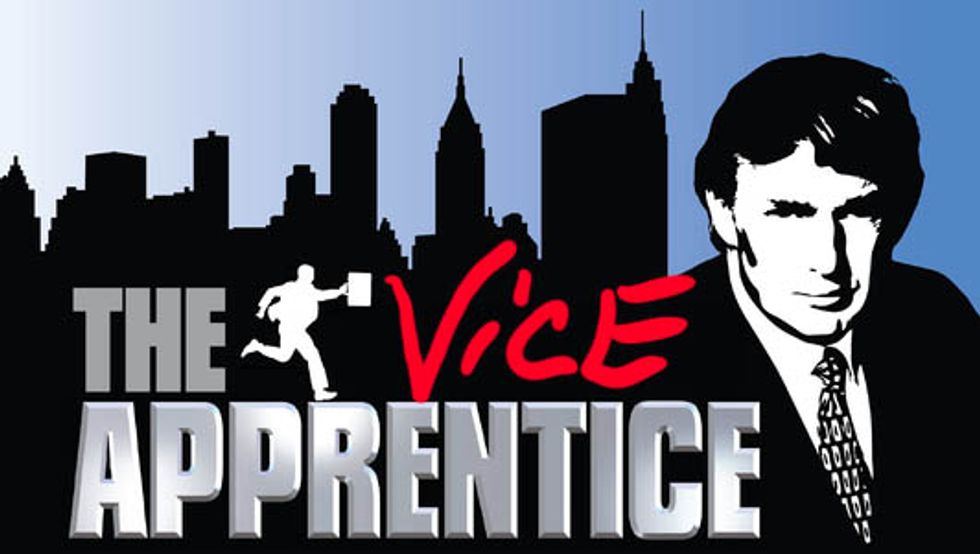 It's a reality teevee show, so that means it's really real!

Nobody wants to have the second best anything, especially Donald Trump, but what else are you supposed to do when you're already the best? Such is the conundrum faced by Donald Trump in searching for the perfect vice president. Instead of the normally secretive process that leaves the national press corp placing nail biting bets, Trump has opted to make his selection process a public spectacle much like his shitty reality show where he made contestants jump through hoops, run races, and coddle him.

While we've speculated about who Trump might choose, there's a growing list of people who are just too busy washing their hair or cleaning their grout to be interested in being Trump's vice presidential pick.

Yesterday Marco Rubio said he was going to skip the convention because he needed to focus on his reelection bid, not because he was afraid of being humiliated (again). John Kasich isn't really interested either, and just announced that he doesn't feel the need to gee whiz all over Trump's special day, so he'll leave Cleveland early. Florida Governor Rick Scott doesn't want the job, nor does South Carolina Governor Nikki Haley. New Mexico's Governor Susana Martinez probably isn't interested after Trump publicly insulted her in May, and Ohio Senator Ron Portman is staying in the Senate. Jeb Bush, in an effort to avoid further career suicide, has said he's not interested. Ted Cruz is already setting up another run for 2020 with new staffers, a 501(c)3, and hopefully, speech therapy.

Iowa Senator Joni Ernst met with Trump on Monday where the two may or may not have paraded around in bread bags while playing with severed hog balls, but left the meeting saying that she would rather focus on Iowa, and that, "President Trump will need some great assistance in the United States Senate..." Clearly, this is just code for how much Joni Ernst hates America.

Finally, there's Tennessee Senator Bob Corker, who jumped out of the VEEPstakes about as quickly as he jumped in. In April Corker, who chairs the Senate Foreign Relations Committee, lauded Trump's disasterpiece foreign policy speech, saying it was "full of substance," "coherent." Then in May Corker flew to New York to meet with Trump, only to say, “It was a good start,” and that he hoped Trump's ideas would continue to "evolve." However, after Corker introduced Trump in Raleigh on Tuesday, Trump praised the ethnic cleansing shitweasel Saddam Hussein, and Corker suddenly announced that he was pulling out faster than a prom date. On his way out, Corker did offer one potential dark horse candidate, Ivanka Trump.

When Corker's suggestion was brought up on Fox and Friends Thursday morning, Ivanka's brother Eric tried to hide growing support saying, "She's got the beautiful looks, right? She's got - she's smart, she's smart, smart, smart." Besides, it's not like there is much to being a vice president beyond being, really, really ridiculously good looking. She's even Jewish, so she'd help out Donald's whole anti-semitism thing because just kidding, he doesn't care.