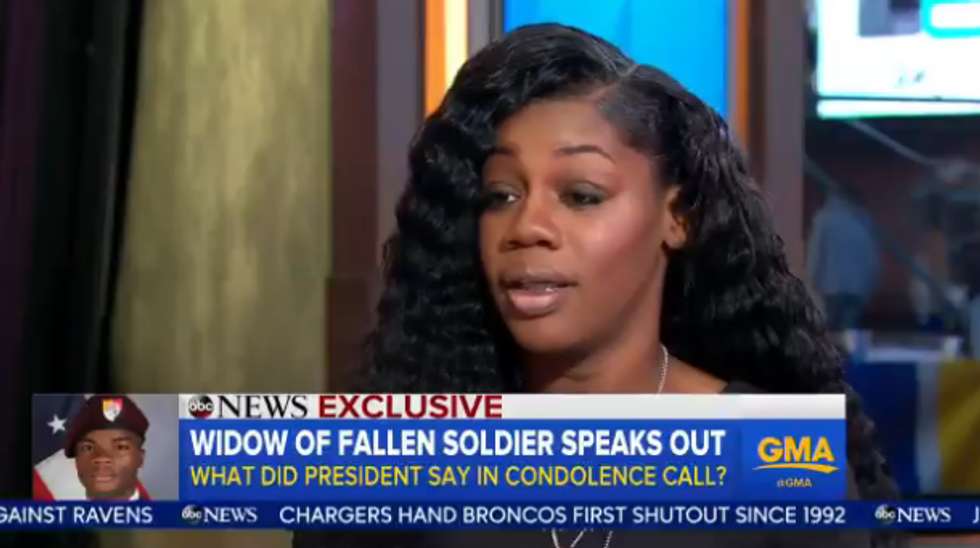 Myeshia Johnson, in case the president needs to be reminded of her name.

Did the weekend even just happen? Isn't Monday the time when Donald Trump likes to debut the NEXT fake grievance he's going to use to hold the American people hostage and distract them from his malignant, failing presidency? Apparently he's still obsessed with last week's fake grievance, because Myeshia Johnson, the surviving wife of fallen Army Sgt. La David Johnson, broke her silence on "Good Morning America" about the phone call she received from the president the day his body was flown back to America, and oh man, she is being so unfair and disrespectful, by saying his words on the phone call hurt her feelings. Is it even legal for her to say that about our American dictator? It's just like that time Trump went to a Republican primary debate and Megyn Kelly pulled out her wherevers and bled all over him on live TV!

Let's get Trump's Twitter version of the events out of the way, so we can get back to focusing on reality ASAP:

Sure, you betcha. Donald Trump said Sgt. Johnson's name SO MANY TIMES, just like he ALWAYS refers to Myeshia Johnson by her name, instead of just calling her "the widow." It's probably because he cares so much.

Except actually that's bullshit. According to Johnson on "Good Morning America," the most upsetting part of the phone call was that Trump not only didn't say her husband's name, he actually "stumbled" trying to remember it: