Trump Won't Take No Guff From Prince Charles, Whose Dead Ex-Wife He Totally Could Have 'Nailed' 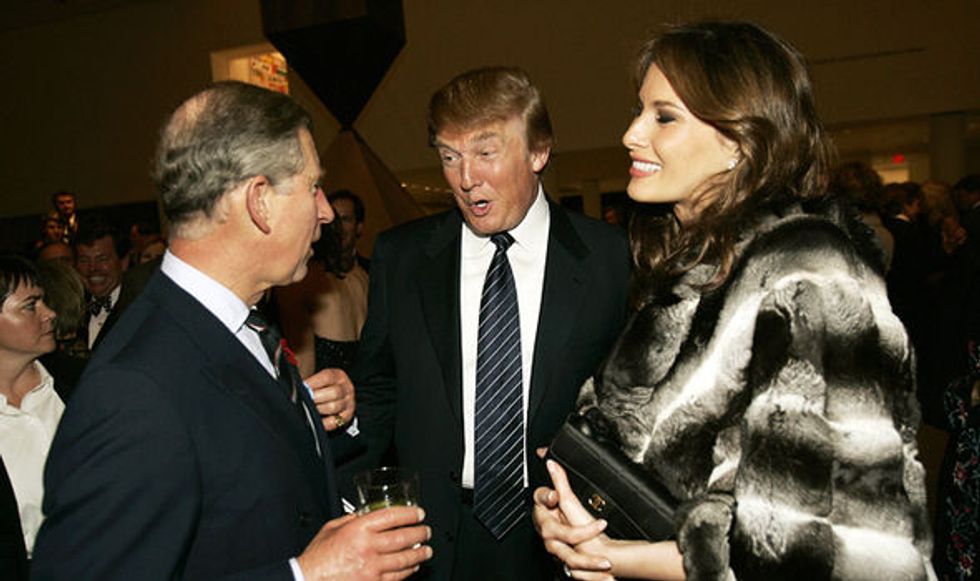 Donald Trump is set to meet with Prince Charles this June when he visits Britain -- which may be awkward given the fact that Trump previously told Howard Stern that he totally could have "nailed" Princess Diana and was also pretty obsessive about pursuing her after the royal pair broke up back in the '90s. Reportedly, Princess Di was super creeped out by Trump after he sent her an absurd amount of flowers after her divorce.

But it may be awkward for other reasons as well! Apparently, Prince Charles has already been warned by Team Trump to not "lecture" Il Dunce about climate change, or else he will "erupt." Which is a totally normal thing for people over the age of three to do when they are told things they don't want to hear.

Here are some hilarious things that were reportedly said about the potential meeting, via The Times of London:

A source close to Trump said: “He won’t put up with being lectured by anyone, even a member of the royal family. Frankly, they should think twice about putting him and Prince Charles in the same room together.”

A senior government source familiar with the discussions said: “Trump’s people are worried about an awkward moment, with Charles saying ‘Why don’t you believe in climate change?’ or ‘Have you read my book?’ They will react quite strongly to that.

“They do not want the president to be put in an awkward position where he’s being lectured. They want horses down the Mall, tea with William and Kate. They want all that pomp and for it to go seamlessly, and one of the risk factors is Charles.

“Their paranoia of the media means that anything that goes slightly off-pitch will be hammered back home as him not getting a good reception from the future king of England and thousands of people protesting on the streets.”

THEY WANT HORSES AND TEA, GODDAMNIT! Not to talk about, like, serious issues affecting the planet! HORSES. AND. TEA. And a golden goose that lays gold eggs for Easter. And the horses should be painted gold and have wings and they should all bow before Trump as he walks past them. And William and Kate will drink tea with him and Melania and all the rags will write stories about how nice they all looked doing that.

You see, Donald Trump has already made up his mind on climate change, and he has decided it is a hoax perpetrated by the Chinese, and scientists who are probably just jealous of him and how rich he is and stuff. And probably Prince Charles is just jealous also, because of how Princess Diana secretly lusted after Donald Trump and that was the real reason for their break-up, not Camilla, whom the Prince only turned to after Diana kept suggesting he try out some orange skin dye to make him more sexually appealing to her and he could just tell what was going on.

To sum things up, Prince Charles is being told to handle the President of the United States with kid gloves on account of the fact that he might throw a tantrum and make himself look bad. And this is the world we live in now. Neat!

[The Times of London]