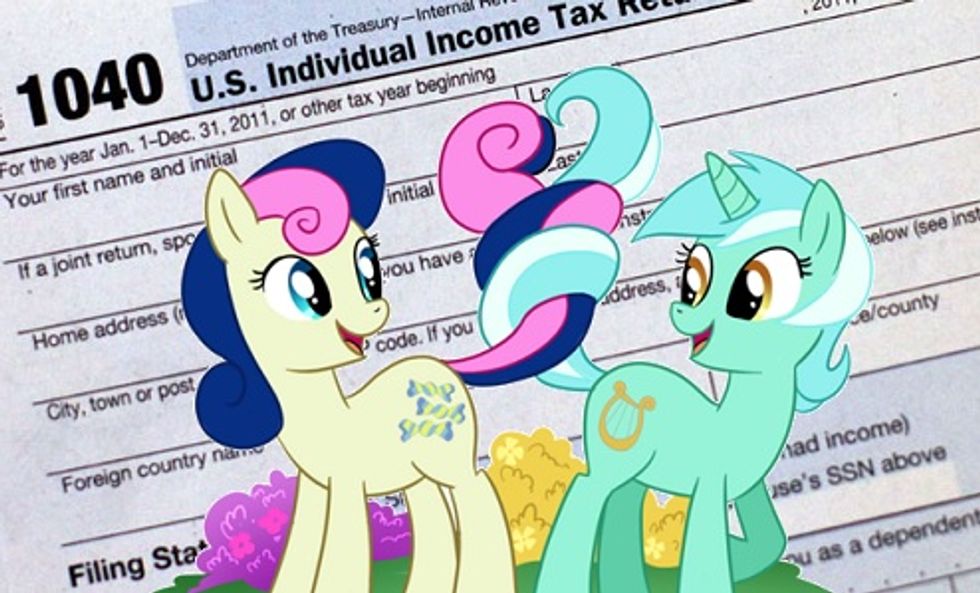 At least Lyra And Bon Bon can still file a joint return.

Who ever thought that rushing to rewrite most of the goddamn tax code in secret, just for the sake of getting a huge tax cut for rich fuckwads and a "win" for their rich fuckwad president, could possibly have any downside? Turns out that while the White House wants employers to adjust workers' withholding by mid-February -- which is already a little fucked-up, since most people will actually get paid a couple times before then -- everyone will still have to check their paychecks to make sure their employers didn't fuck up. Thank goodness, the IRS has a handy dandy online calculator to make it easy for taxpayers to check their withholding! Oh, except, golly, that calculator isn't ready yet either.'Splainer that for us, Washington Post!

The White House said Thursday that businesses should make these adjustments by Feb. 15, part of the administration’s push for millions of workers to see bigger paychecks as quickly as possible [...]

But these tax withholding decisions are based on tax forms Americans file with their employers, known as W-4s, that were written to apply to an outdated tax system.

No, the IRS hasn't finished writing new W-4 forms either, because as you may recall, the tax bill was written at the very last minute and rushed into effect as of January 1, so no one would have to wait to see their pittance of tax savings right away. So that left the IRS scrambling to make sense of the pile of stupid the Republicans voted on without knowing what's in it, and then convert that into actual tax rules and forms. The GOP donor class wanted their tax cut, and as Donald Trump reassured them, the very rich will see their big savings right away, especially since they have the best accountants and tax lawyers. Everyone else will have to just stay calm while the IRS works out the bugs.

Treasury Secretary Steven Mnuchin explained it's no problem: All they have to do is take the now-outdated forms and rejigger them a little, and maybe put a matchbook under the tax table so it doesn't wobble so much:

“We had an existing form,” Mnuchin said. “We had existing technology. We had to figure out how to fit this in this format.”

Easy-peasy! Oh, except that it looks like the new forms may be a little bit off, causing a substantial percentage of folks to not have enough tax withheld, so they may need to pay tax when they file instead of getting a refund. But won't they be delighted to see how much bigger their (insufficiently withheld) paychecks are, before they pay it all back next April? Besides, once the new tables are all worked out and the calculator is up and running, it'll be a simple matter for people who actually pay attention to regular announcement from the IRS to go online, use the calculator, and then have their employer withhold the proper amount. Don't most of us look forward to every last step in taking care of little chores like that? It's a great time to get in the habit of using a checklist!

In other exciting news of how Trump's IRS is fucking up, ThinkProgress reports the IRS hired private collection agencies to go after low-income Americans who owe the government small amounts of unpaid tax and penalties. It was a huge success in the way that only a bureaucracy could love:

[The] debt collectors had cost the IRS $20 million but had only brought in $6.7 million — less than one percent of the total amount targeted for collection. In some cases, the private agencies received commissions for work they hadn’t actually carried out.

We bet that $7 million really helped put a dent in the $450 billion in unpaid taxes owed by Americans. Of course, maybe it's a teensy bit of a problem that instead of going after tax cheats who owe large amounts, the collection agencies did what they do best, shaking down people making less than the national median income. A quarter of the households targeted for collections had incomes under 250 percent of the federal poverty level -- which by coincidence is pretty much the definition of "low income."

You will not be the least bit surprised to learn that despite the dismal outcome, the IRS plans to continue using private collection agencies, because the practice was pushed by congressional Republicans. And yes, when Mnuchin was asked about the use of private debt collectors during his confirmation hearings, he replied, "it seems like a very obvious thing to do."

As for the IRS using IRS agents to go after any of the rich fuckwads avoiding taxes, don't hold your breath -- the agency's lost a fifth of its funding since 2010, and has been targeted for further budget cuts, because EVERYONE hates the IRS.

Yr Wonkette is supported by reader donations. Please click here to send us money. Not sure how much to give? "A lot" is good.