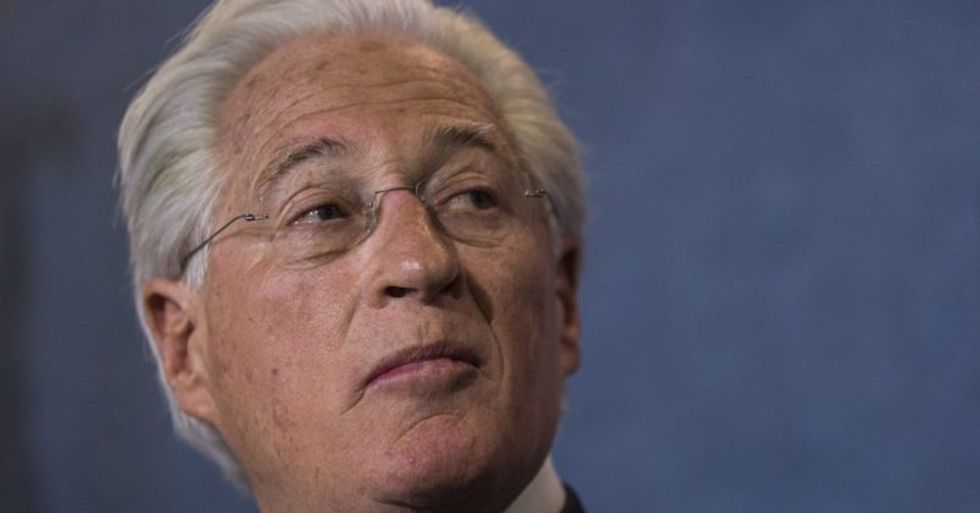 We don't want this VERY HILARIOUS STORY to get lost in all the revelations about Trump Junior's Russian Escapades, because 1) it's a stunning comment on just how AWFUL of a client Donald Trump is, that the best legal counsel he can get to defend him in RussiaGate is this one fuck-up Marc Kasowitz, and 2) Kasowitz has a weird connection to the Trump Junior story. Let's sexplore!

The other day, ProPublica had an extensive and personal piece (some found it kinda nasty) about Marc Kasowitz, the head of Trump's legal team who reportedly may be on the verge of resigning because Trump is such a shitty client. The ProPublica thing detailed Kasowitz's (alleged!) alcohol abuse and (alleged!) trip to rehab, and lots of other dirty personal things. The point, though, was that this sort of personal history, for this New York lawyer who is CLEARLY out of his league right now, is the type of thing that makes it REAL DAMN HARD to get the kind of security clearance necessary to defend Donald Trump in an investigation as deep as wide as the inquiries into whether the Trump campaign did conspiracies with Russia in order to swing the election.

Rachel Maddow reported on the ProPublica piece on Wednesday night. Also on Wednesday night, President McNasty went wheels up and tits out on Air Force One, so he could go do gross pervings to French First Lady Brigitte Macron on Bastille Day. So this means Marc Kasowitz was maybe sorta kinda "off work" at the time, or at least on a break. Maybe he went to the Applebee's for happy hour and their 2 for $20 entree special and had a few too many fruity martinis, because when a Maddow viewer saw the story and emailed (pretty politely!) encouraging him to resign, Kasowitz responded. Oh, he responded! ProPublica has the goods (again):

WONKETTE DID THE NOSE COFFEE THING TOO!

So ProPublica reports that fifteen minutes later, Kasowitz emailed the dude again, totally unprompted. Maybe his third Fireball shot had kicked in and Applebee's was like "no it's cool, the restaurant is closing but the bar stays open late."

BITCH! At that point, the guy emailed back, and yet again was very nice. (Though he might have been doing that thing yours truly does sometimes, when we intentionally reply all nice-like, in order to annoy people.) Kasowitz, of course, responded:

And then 33 minutes later, there was yet another Kasowitz missive! ProPublica and Maddow (she reported on this Thursday night, through giggles) note that he seemed to be referencing the emailer's last name, which we guess is of the Jewish variety:

I'M ON YOU! I KNOW WHERE YOU LIVE! Hey I just met you and this is crazy but here's my number so CALL ME MAYBE! BITCH!

Instead of Calling Kasowitz Maybe, the emailer called the FBI.

We don't think Kasowitz is any closer to getting that security clearance. Which is insane, because as Maddow pointed out on her show, this means any time there's a meeting related to the investigation that involves classified information, Kasowitz has to wait in the hallway and play pocket pool. That's the head lawyer for the PRESIDENT OF THE UNITED STATES OF AMERICA.

Kasowitz's spokesman issued a statement saying OMG HE IS SO SORRY, and said he "intends to apologize" to the dude. The excuse?

While no excuse, the email came at the end of a very long day that at 10 p.m. was not yet over.

Gah! He was just so busy working that he had to constantly email this guy back and scream threats at him. Happens to all of us. Totally.

So this is all hilarious and wonderful and shit, and it probably made you do LOL-giggles in the middle of your scrapbooking club meeting. But weird old Marc Kasowitz is a character in the other big story of the day in a VERY STRANGE WAY, which we will explore in our next post!

This is part 1 of a two part blog post. WHOA IF TRUE! Click for part 2, where we learn how Kasowitz might be connected to today's news about Donald Trump Jr. and his sexcellent Russian conspiracy meeting. SHIT IS FUCKED UP YO!