Trump's Dr. Oz Appearance Hasn't Even Aired Yet And Already We Are Laughing And Laughing 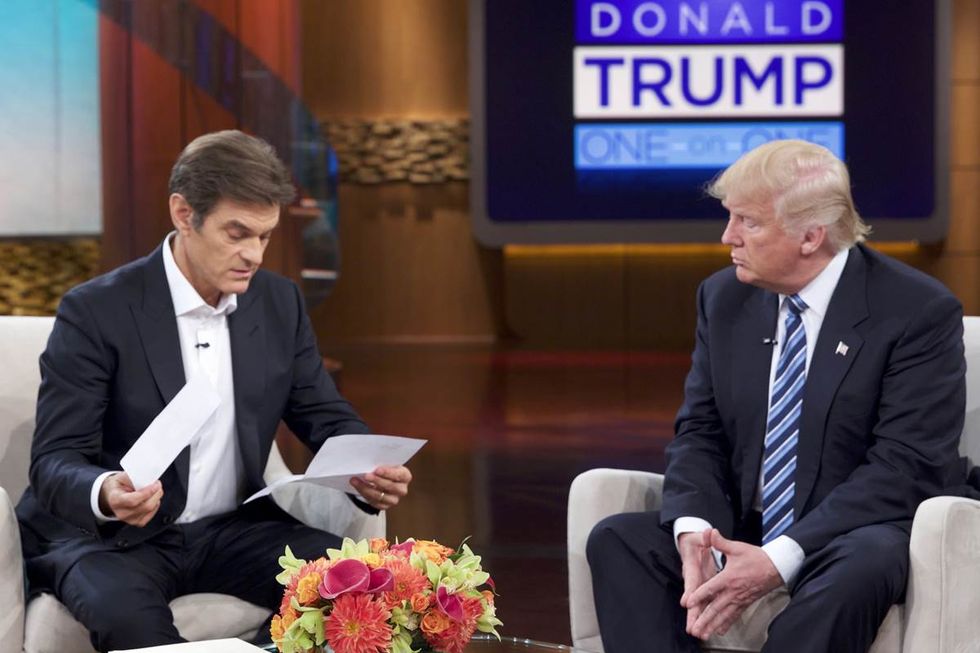 Donald Trump taped an appearance on the Dr. Oz Show Wednesday to discuss his health situation -- because what else would be more apt for that Trump guy than the television show of a pseudoscience peddler who once had to sit through a senate hearing and get yelled at by Claire McCaskill for selling magic beans?

It won't air until sometime today (check your local listings -- for fraud!), but we've already got some hot goss being reported by people who watched the taping, and it definitely seems like it's going to be a TRAINWRECK. Which is extra hilarious since Dr. Oz reportedly promised not to ask Trump any questions he doesn't want answered. The big "surprise" of the show is that Trump gave Dr. Oz a copy of the results of a physical he took last week with his gastroenterologist Dr. Harold Bornstein. Previously, he'd said he'd release all of his medical records, and then he was like, "NAH, don't think I'll do that actually," and then just decided to release this shit. He's crafty!

NBC reporter Katy Tur shared some of the dirt on Twitter:

Perhaps the most darling thing on there is Trump's assertion that he could totally be in the PGA if he wanted. According to a guy who knows way more about golf than I do, this (SHOCKINGLY) is not in fact true. Donald Trump is good at golf for a regular person, he is not professional levels of good at golf.

Oh, it's also quite interesting that Dr. Oz said Trump was overweight. Not because there is anything wrong with him being overweight, but because he feels ever so free to comment on women's bodies and looks all the time. If I were a doctor (I am not), I would suggest that he abstain from that kind of activity until he is in peak physical condition himself. Thank goodness, he says he's working on that, with exercise:

The Trump campaign says that he will be releasing his actual medical history "very, very soon." A spokesperson said Dr. Bornstein needed to check a thesaurus to find more synonyms for "astonishing" and "excellent."