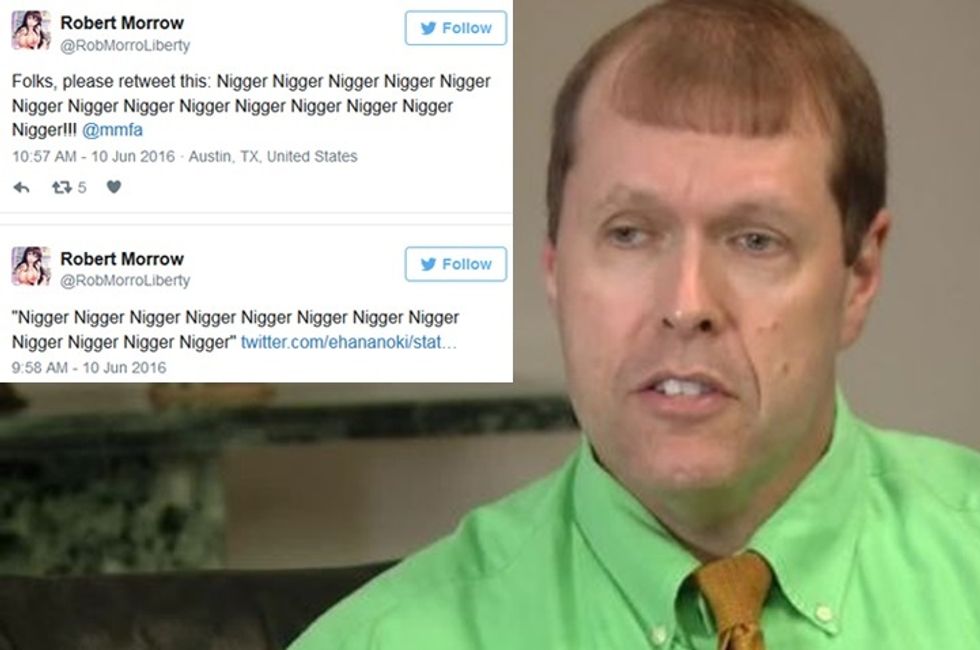 Robert Morrow, the despicable racist douchebarge who used to regularly spam our inbox with important stories about how Bill Clinton isn't Chelsea's REAL daddy (and Hillary is a big lezzie, duh), has moved up in the world from being a run-of-the-mill asshole conspiracy theorist. He's now an asshole conspiracy theorist endorsed by the presumptive nominee of the Republican Party.

You see, Morrow co-perpetrated a book-shaped object about the "Clintons' War on Women" with Trump's close buddy Roger Stone, and Deadbeat Donald was so impressed he even plugged it on Twitter last fall (because it didn't cost him anything):

How much does Donald Trump like this book? New York magazine says Trump's been consulting the dubiously-sourced scandal collection, Trump has referred to it on Fox News, and Morrow himself told the Daily Beast Trump is definitely "going to use it. It’s just a matter of when" (feel free to discount that last one, given Morrow's highly flexible relationship with reality).

Politico says the Trump campaign vigorously denies any connection to Stone, though Trump is preparing a "charge sheet" to smear Hillary Clinton with sometime next week, and they note if Trump chooses to, the Stone-Morrow book "could provide a trove of material, however controversial, if Trump opts to go down this road." Hmmm ... it's the lowest road possible, so we'll assume Trump will be making extensive use of it.

So, should it be any surprise to anyone that Donald Trump is using stuff written by a YOOGE racist? Media Matters has collected over 50 uses of the 'N'-word in recent Tweets by Mr. Morrow, who sometimes just likes to copy the word again and again until he reaches the character limit. You see, he's free of all that oppressive political correctness, and so he constantly posts tweets with that word. This somehow proves his devotion to free speech, liberty, and being a racist dickhole for the sake of being a racist dickhole. In fact, both Stone and Morrow cherish free speech so much, they can barely get through the day without unzipping their pants and waving free speech all over the internet:

Stone’s co-author Robert Morrow is similarly disreputable and racist. He’s wished death on Hillary Clinton and been visited by the Secret Service; posted bizarre sexual writings about the former secretary of state; called Chelsea Clinton a "slut" and imagined how she would "have sex one day" with Bill Clinton; posted about "pro-faggot JUDICIAL ACTIVISM"; and claimed the Bush and Clinton families were involved in murders.

And how about The Clintons' War On Women? Just how well-researched is this tome full of carefully sourced accusations against the Clintons? You might consider just one of the book's sources:

[It's] dedicated to and cites anti-Clinton research from virulent anti-Semite Victor Thorn. In addition to his Clinton work, Thorn also wrote The Holocaust Hoax Exposed -- as the title suggests, Thorn believes the Holocaust is a myth -- and blames a "Jewish plot" for the 9/11 attacks. Morrow said he is “Very proud to have ace researcher Victor Thorn as a friend of mine. Knows a lot about Clinton/Bush crime families.”

Sounds like the research is pretty thoroughly peer-reviewed, then.

[wonkbar]<a href="http://wonkette.com/600709/bill-oreilly-mystified-why-are-the-blacks-so-racist-against-poor-donald-trump"></a>[/wonkbar]Now, we wouldn't want to give the impression that people shouldn't vote for Donald Trump because he's a fan of a book by an open racist. That would be the worst sort of guilt by association, and Donald Trump is racist enough all on his own, even if he'd never been attracted to a book co-written by a certified racist looneybird. His fondness for crappy conspiracy fiction by racists is simply one more reason he's unfit for the presidency, and might not even be in the top ten reasons.

Morrow is, like Trump, the recent beneficiary of idiots with ballot access, and was recently elected chair of the Republican Party in Travis County, Texas, a move the rest of the county party was so embarrassed by that they voted in changes to their bylaws to limit his actual power. As for his online persona, Rachel Maddow has had some fun calling attention to that, and Media Matters notes his fondness for misogyny and racism:

He rates half-naked anime characters. He tweets pictures of scantily clad women. And he revels in tweeting the slur “nigger,” including calling President Obama a “nigger.” (Morrow tweeted that he will soon “be the Head Nigger in Charge of the Travis County Republican Party.”)

[wonkbar]<a href="http://wonkette.com/597930/neo-nazi-trump-supporters-cant-stop-fapping-to-anime-your-saturday-nerdout"></a>[/wonkbar]He rates half-naked anime characters? Jeez, a person has one redeeming feature and they turn out to be a creepy Trump supporter. How seriously disappointing.

Also worth noting: as soon as Media Matters posted a tweet about its story, Morrow immediately tweeted the word "nigger" fifty more times, along with a link to the Twitter account of the article's author, Erik Hanoki. We should note that several fans of Morrow, in between tweets calling Hanoki a "Jap" and filling the reply box with "nigger," promptly tweeted that Morrow is not a Trump supporter. While the love may be unrequited, Robert Morrow really is tuned into the worldview and wit of Trumpbois.