Trump's Lying Campaign Manager Knows Who Was For Iraq War, And It Was Barack Obama 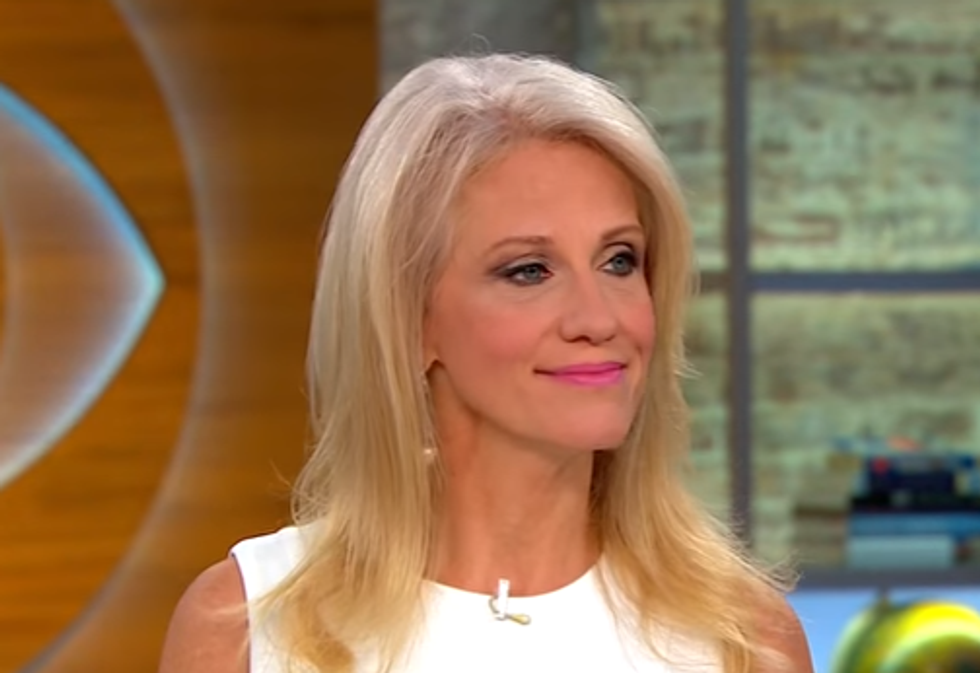 Donald Trump said so many stupid things in Wednesday night's Commander-in-Chief Forum, it's been a chore to chase the fallout from every terrible thing he said. Now it's time to update you on this stupid statement from Trump: "I was totally against the war in Iraq. From a — you can look at Esquire magazine from ’04. You can look at before that." Uh huh. Trump spent all Thursday lying about his lack of support for the Iraq war, to the point that Esquire actually had to append an editor's note to its 2004 piece (which is, #CalendarFact, WAY after the Iraq war got started and was going to hell in a handbasket), which said this:

The following story was published in the August 2004 issue of Esquire. During the 2016 presidential election, Donald Trump has repeatedly claimed to have been against the Iraq War from the beginning, and he has cited this story as proof. The Iraq War began in March 2003, more than a year before this story ran, thus nullifying Trump's timeline.

Trump is lying, because Trump lies, about anything and everything, because that is what pathological liars who may or may not be mentally ill do. It's worth noting that in 2002, when the debate was a-ragin' over whether we should retaliate against the terrorists who did 9/11 (many of them Saudis), by annihilating the wholly separate nation of Iraq, Howard Stern asked Trump if he supported going into Iraq. Trump's response? "Yeah, I guess so." He was for the war before he was against it, basically, because on top of being a liar, Trump is a flippity-floppity flip-flopper who wears flip-flops.

During the Commander-in-Chief Forum, Hillary Clinton noted that she had taken responsibility for her own vote, had repeatedly said it was a mistake, and called Trump out for being too much of a pussy to own up to his mistake in supporting that war. But meh, why do that when he can just lie and the media won't call him on it and his supporters are stupid enough to believe everything he says?

Which brings us to Friday morning, as Trump campaign manager idiot lady Kellyanne Conway tried to divert attention from her candidate's lies by saying it's just SUPER MEAN that people aren't taking Trump at his word that he wouldn't have voted for the Iraq war, when they took then-candidate Obama at his word, when he said the same thing. "DOUBLE STANDARD MUCH?" is the "gotcha question" that obviously occurred in Conway's brain Friday morning in an appearance on "CBS This Morning":

CHARLIE ROSE: Was Donald Trump for the Iraq War, or against it?

ROSE: How do we know that?

CONWAY: Because he said so. The same thing that Senator Obama said he would have done in 2008, and everybody just took him at his word.

Conway went on to say that's doubleplus unfair, because Trump said lots of other times, specifically two years later in that fucking Esquire article, long after the war started, that he was against that war, unlike Dirty Obama, who everybody believed when he said ... WAIT WHAT? DID SHE REALLY MEAN TO BRING UP OBAMA HERE? Did we really take Obama "at his word" when he said he would have voted against the Iraq war? Is she insinuating that, hey, maybe Obama is the one who secretly supported the invasion, as opposed to Trump? WTF IS SHE SAYING?

Because between Donald Trump, Hillary Clinton and Barack Obama, there is exactly ONE person who is the Hair Club President And Also A Client of being against the Iraq war from Day One, and that is Barack Obama. As Greg Sargent points out at the Washington Post, Obama gave a speech in 2002, before Hillary and all the other senators voted to give Dubya carte blanche to dick around with bombs in Iraq, opposing the war. Good god, we know the Trump campaign is full of fucking liars, but this is a whole new level of disregard for well-documented facts. Sargent continues:

It has been widely discussed for years as one of the reasons [Obama] went on to defeat Clinton in the 2008 primaries (which Conway referenced) and win the presidency. So we aren’t taking Obama’s opposition to the war at the time “at his word.” There is a record of it. There is also a record of Trump’s support for it, and as the Post fact checking team has documented, no evidence of opposition to it.

Now will any of this matter to Trump supporters? No, they are all idiots, and they are fucking goldfish when it comes to remembering anything that happened 14 minutes ago, much less 14 YEARS AGO.

[wonkbar]<a href="http://wonkette.com/605887/donald-trumps-campaign-manager-curious-about-this-constitution-you-keep-mentioning"></a>[/wonkbar]When Kellyanne Conway came on as Trump's campaign manager, we felt something akin to sorry for her, for having the thankless and impossible task of trying to fix Trump's fucked up, downward-spiraling campaign. Now? Meh, she is just as much of a brazen liar as the rest of them, or maybe she is really that dumb, or maybe it is both.